Once again, in the grounds of St Paul’s Church in the heart of Covent Garden, Iris Theatre have created a little pocket of Arcadia. Last year it was the woods of Athens, for A Midsummer Night’s Dream; this year their unique brand of magic transforms the garden into the Forest of Arden, for As You Like It. As today was one of those rare summer days when London enjoyed glorious sunshine and Mediterranean temperatures, I decided to seize the moment and went off for some immersive Shakespeare.

The joy of going to see Iris Theatre is that they’re a lively young company, full of energy and bright ideas. Like all their productions in the St Paul’s garden, As You Like It is a promenade performance. You begin in the paved forecourt to watch Orlando and his elder brother Oliver squabbling over their inheritance; then a ducal procession sweeps past and drags you along in its wake to a lawn where a wrestling ring has been set up for the bout between Orlando and Charles. Rosalind is banished on the church steps, which later stand in for a part of the forest.

When musicians beckon you towards the great tree hung with lanterns, in the far part of the garden, you find the most lovingly-designed part of the set: the exiled court of the Duke, which gathers in fraternal simplicity ‘under the greenwood tree’. The audience spreads out on the bare earth (bring something to sit on if it’s likely to be damp, and don’t wear white trousers), and a sound installation by Filipe Gomes fills the air around the tree with the twitter of birds and the cooing of wood-pigeons. Covent Garden never felt so bucolic. Like last year, the play concludes inside the church, inviting the audience in one by one through a yawning cave mouth to the interior, hazy with music and soft with golden light.

I don’t know As You Like It anywhere near as well as A Midsummer Night’s Dream, but the Iris actors make everything very easy to follow. They draw out every element of humour, add their own slapstick, throw in cheeky ad-libs and take every opportunity for a song. (The music works so well because you need something to fill the time when the audience is scrambling around the garden.) And the result is something fizzing with spirit and warmth. There were eleven members of the cast this year, some of whom I had seen before. I have to begin by mentioning Christopher Rowland, who dazzled me as Ariel in Antic Disposition’s Tempest last September and whom I hadn’t for a moment expected to see in this. He took the triple roles of Amiens, Hymen and Jaques de Bois but was also responsible for most of the singing, and what a treat that was. The other actors who particularly impressed me this time round were Matthew Mellalieu, Tom Deplae and Emily Tucker, although to be honest everyone else is also so good that it seems churlish to pick only three. I should also mention Diana Kashlan, who plays Touchstone – an interesting piece of cross-gender casting – with dizzying, good-humoured hyperactivity.

Matthew Mellalieu, who made such a wonderful Bottom last year, was back in the triple role of the wicked Frederick, the exiled Duke and – perhaps surprisingly – Audrey, stealing every scene he was in. The man absolutely radiates bonhomie and he speaks Shakespeare as if born to it. His Audrey was a brilliant bit of comic relief: with his bearded face flanked with blonde plaits, he channelled the very essence of the description in the original cast list, as ‘a Country Wench’. Big-boned and towering over the spry, nimble Touchstone who was wooing ‘her’, this was definitely an Audrey to remember. Tom Deplae took the role of the world-weary Jacques, a character I’d never previously warmed to, and performed a minor miracle in making me sit up with anticipation whenever he arrived on stage. He was superb. Wry and sympathetic, he handled the language with consummate ease; and during the ‘All the world’s a stage‘ speech, every eye in that garden was fixed on him. 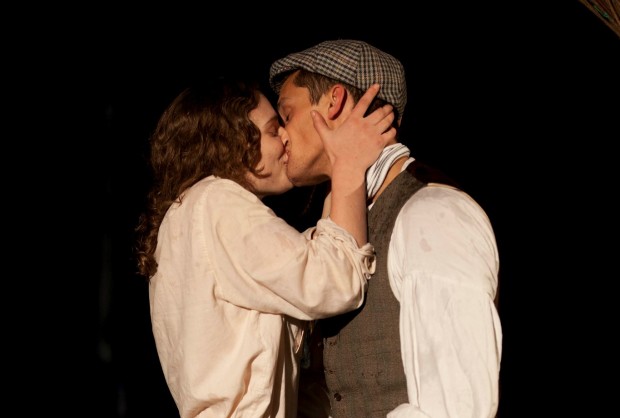 The greatest part in the play is Rosalind – and it must be up there as one of the best, if not the best female role Shakespeare wrote. Emily Tucker, whom I flagged last year as a bubbling Mustardseed, turns in an even better performance as the Duke’s daughter who dons boy’s clothing to seek her liberty – and love – in the Forest of Arden. Boisterous and intelligent, she plays Rosalind/Ganymede with the gusto of a thigh-slapping principal boy, swaggering around the stage and gleefully tormenting poor, oblivious Orlando (Joe Forte). She seems much more comfortable in her man’s clothing than in the restricting, extravagant costumes she and Celia must wear at court – those initial outfits and wigs reminded me of the dresses of the Capitol in The Hunger Games.

This is a dream, an Arcadian never-never-land where good rulers hold court like Robin Hood in the forest and social constraints vanish, to allow love to flourish where it will. It is once again a perfect way to spend a sunny evening in London, and I am more than ever convinced that Iris Theatre will be worth seeing no matter what they do in the future. With their verve and vigour, they offer much more value for money than the tickets to big-name shows in the main theatres, and I urge you with every fibre of my body to catch this show while you can.

Find out more about Iris Theatre 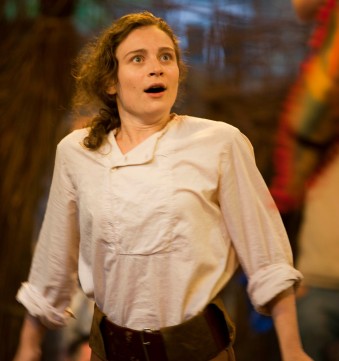 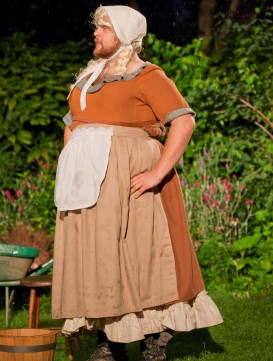