Anyone who’s been reading this blog for a while will have noticed that I tend to get slightly overexcited about some subjects. Tudor costume, for one thing. The Trojan War, for another. And Vikings – for which we can entirely blame Dorothy Dunnett’s King Hereafter. Earlier this year, there were a lot of posters around London advertising the new drama series Vikings, made for the US-based History channel. As I don’t have Sky, I’d given up all hope of being able to watch it any time soon, but I then discovered that LoveFilm Instant has the exclusive rights in the UK and so, over the weekend, I stormed through the entire first season.

As it hadn’t been made more widely available, I’d assumed that it hadn’t been very successful or wasn’t very good, but that’s really not the case. It may not be Casablanca, but it’s rollicking good fun: after the first episode I was completely hooked, all the more because I honestly had no idea what to expect from it. If you’ve watched and enjoyed anything along the lines of Game of Thrones, Rome, The Borgias or The Tudors, you should definitely give this a go.

Despite my best intentions, I haven’t yet made my way through the Sagas of Icelanders, which Heloise recommended, or any other sagas for that matter, so I’m not able to judge how closely the series’s plot sticks to its source material. Wikipedia, ever handy in such circumstances, tells me that the storyline was drawn from the Ragnars saga Loðbrókar, the Ragnarssona þáttr and the Gesta Danorum (is anyone nodding knowledgeably? If so, I’m impressed).

The year is 793, and our hero is Ragnar Lothbrok: a Norse farmer and family man who spends his summers raiding in the Baltic with other retainers of his overlord, Earl Haraldson. But Ragnar is beginning to grow disillusioned with the East and his mind turns more and more to stories he has heard about wealthy islands to the west – lands that none of his acquaintance have ever managed to find, but which Ragnar believes he can locate. Armed with new navigational tools, he persuades his shipbuilder friend Floki to craft a boat for him and assembles a crew – all in secret, as Earl Haraldson has no interest in changing his established formula and taking unnecessary risks. When Ragnar, his brother Rollo and their men set out into the sea mists, trusting blindly in Odin and hoping for the best, they eventually find themselves off the shore of a monastery island – Lindisfarne, off the coast of Northumbria.

Nothing will ever be the same again. The English will become aware of an unexpected enemy off to the north, whose terrifying appearance seems to herald the Day of Judgement. Ragnar and his crew will sail home wealthy men: laden with riches and slaves (including Athelstan, one of the Lindisfarne monks who speaks their language) and hungry for more in the future. And Earl Haraldson will find that Ragnar Lothbrok, whom he has always considered a troublemaker, has stirred up new ambitions and new threats in the community he rules – and those in power never appreciate those who disrupt the status quo.

Athelstan (George Blagden) in the scriptorium on Lindisfarne

Rather unexpectedly, for a series about people who are generally seen as rapers and pillagers, there is very little sex and almost no gratuitous nudity (I would have said ‘none’, but the final episode disappointed me slightly in that respect. In that episode I could see the hand of the man behind The Tudors at work). Moreover, there are some seriously feisty female characters: most notably, of course, Ragnar’s wife the shield-maiden Lagertha (played with fiery dignity by Katheryn Winnick); but I think I spotted at least two other women in the raiding party in the later episodes. I was rather pleased, first, that they were there and, second, that the programme didn’t feel the need to make a big thing about them being there. The cinematography is splendid as well, with sweeping views of fjords and crags, of dragon-headed ships surging over the waves, and uncompromising battle scenes. Most crucially, they manage to suggest the presence of the Norse gods – or at least the strength of the characters’ belief in their presence – without going too far into mysticism. I found the blind seer faintly terrifying, in a Pan’s Labyrinth sort of way.

The cast was generally very good and the standard of acting much, much higher than I’d expected. All the Norse characters spoke with a vaguely Scandinavian lilt, which was initially a bit distracting, but came to seem natural as time went on. Standouts for me were Gustaf Skarsgård as the craftsman Floki, who is both a visionary shipbuilder and clearly as mad as a bag of cats; and Clive Standen as Ragnar’s brother Rollo, whom I can only really describe as a fine figure of a man, and who made the series even more enjoyable to watch. I was also glad to see George Blagden again: having admired his Grantaire in Les Misérables, it was good to see him stretch his acting muscles a little more as the Northumbrian priest Athelstan. 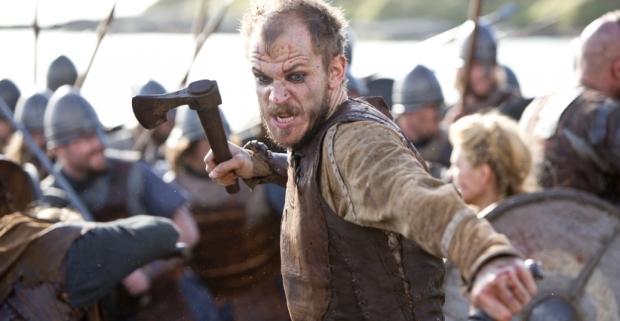 Perhaps the greatest surprise, however, was Travis Fimmel as Ragnar. The last time I heard about Travis Fimmel was when I was in my late teens and he was modelling for the Calvin Klein underwear lines. I had a large poster of him on my bedroom wall, which was pilfered in not entirely legitimate circumstances from a Calvin Klein outlet. Allegedly one of his billboards in London had to be taken down because it was distracting drivers. Without knowing his name, however, I would never have made the connection between the beautiful blond-haired boy from back then and the more weathered, more interesting face from now. When I realised that he had the lead role in this series, with the success of the whole concept resting on his shoulders, I was a bit worried. Ex-models aren’t necessarily known for good acting and I hadn’t seen him in anything else. But I have to say that he pulls it off with great charm and aplomb. His Ragnar is quiet and self-contained, but underneath the calm surface there’s also a rock-hard self-confidence and an eternally simmering sense of enterprise and mischief. He also has enough charisma that you can actually believe warriors would be ready to follow him. He’s more of a strategist than a mindless thug of a fighter, though in a battle he’s a strong enough warrior to keep his men’s respect; and that’s why he achieves such success.

If you grew weary of the way history was sidelined by sex and nudity in The Tudors or The Borgias, then this is something worth looking out for. It’s well-paced, absorbing stuff. Although some of its historical accuracy has been criticised – the wrong kind of costumes; the temple at Uppsala being given the form of a Christian stave church from a later period etc. – I’m not in a position to be able to judge this, thankfully, and so I simply let myself be carried along on the tide. Although I felt that the last episode was considerably weaker than the others – as if the screenwriters were scrambling around in a sudden effort to provide loose ends and cliffhangers to kick off Season 2 – it was generally a strong series that allowed character to play as strong a part as action. When there was action, though, it was worth waiting for. I bubbled over with unalloyed glee at the point in the fourth episode when, as the Vikings readied themselves for battle, someone yelled: ‘Shield wall!’ After two volumes of Bernard Cornwell’s Uhtred series, I do appreciate a good shield wall. Sadly there was no oar-dancing, although in retrospect that might have been too much awesomeness for me to handle in one go. And there’s always Season 2…