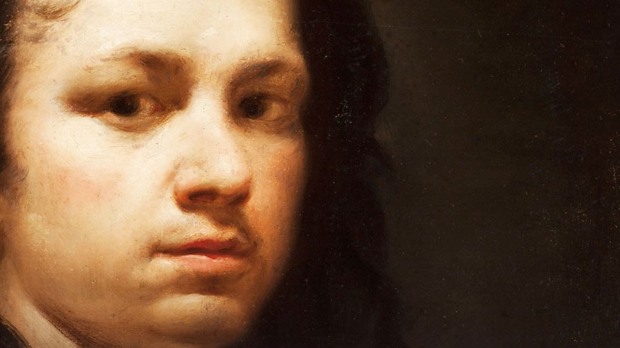 Portraiture was a genre that Goya didn’t really begin to explore until his late thirties, but he quickly became celebrated for the bravura of his technique and his ability to capture, honestly and unflinchingly, the personalities of his sitters. His success was crowned in 1786 with his appointment as Painter to the King, and his subsequent portraits of the Spanish Royal Family and their courtiers provide a glimpse of a glittering, privileged world that would soon be torn apart, first by internal strife and then, later, by the French invasion.

The exhibition is much more than a simple parade of one beautiful picture after another. Goya’s portraits are shrewd, wary, witty, warm and challenging, because he’s rarely content to simply paint the outward show. That’s not to say that he skimps on grandeur, because Goya at his most flamboyant is one of the most daring painters of the period. The gold trimmings on Ferdinand VII’s crimson cloak are evoked with dots and dashes of black, white, yellow and red, tumbling over the canvas with impressionistic verve. The uncompromising, fierce riot of colour made me think of Jackson Pollock.

But for Goya the clothes do not make the man. He’s more interested in painting what lies beneath the finery and so, for all the grandeur of Ferdinand’s gold braid, my memory of that portrait is dominated by the face. It’s not a kind face, but one that seems self-satisfied, spiteful and pusillanimous. Compare this with Goya’s treatment of his friend Gaspar Melchor de Jovellanos, who sits half-lost in mournful thought, represented with a softness and affection which is a world away from Ferdinand’s brash strutting.

The catalogue suggests in its opening essay that Goya was an objective painter, but I find it hard to see this. Perhaps it’s simply my imagination going into overdrive, but when you look at a Goya portrait it seems immediately obvious whether he felt a sympathy for his sitter or not: he had a particular gift of representing people in a way that suggests an entire personality.

Take the handsome Marquis of San Adrián, for example. Painted in 1804, he leans nonchalantly on a pillar exuding self-confident charisma, from his fashionably windswept hair down to his yellow buckskin breeches, whose broad highlights suggest their softness. The book in his hand acknowledges his status as a scholar and patron of the theatre, but the wicked eyes and slight grin give a flavour of a lively character which almost crackles off the canvas thanks to Goya’s vigorous brushwork.

Compare him to the Duke of Alba, patron of Haydn and a gifted violinist, who was painted in 1795 in almost exactly the same pose but in reverse. The Duke has none of the Marquis’s extrovert playfulness, though he’s just as elegant. Reading a Haydn score, with his violin close to hand, he’s a thoroughly serious, self-contained figure, although there’s still a brooding intensity to his stare. And then compare both of these gentlemen to Don Valentin Bellvis de Moncada y Pizarro, painted at much the same date as the Duke. Goya ‘zooms’ in on Don Valentin, who nevertheless still looks small and slightly isolated against a broad dark background. His hands close tightly on the handle of his cane; he glances towards the viewer shyly, almost furtively; and the soft quirk of an eyebrow suggests hope, fear and uncertainty all rolled into one. But there is a great humanity in Goya’s portrayal of all three men: an equal warmth, even as he implies three very different personalities in his portraits. 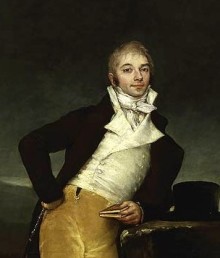 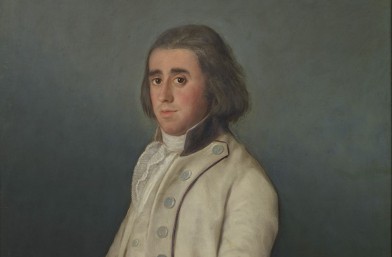 It seemed to me (based on this show, anyway) that Goya rarely reached the same level of psychological engagement in his portraits of women. These feel more traditional, as swagger portraits that seek to convey the sitters’ wealth, status and beauty without probing in quite the same way into their inner lives.

He is much admired for his famous portrait of the Duchess of Alba, but while it’s technically impressive for its rendering of black lace and gold sleeves, and the free washes of the background landscape, I don’t get much sense of the Duchess as an individual. She stands pointing down to the words ‘Solo Goya‘ written in the dust at her feet. Traditionally interpreted as proof of a love affair between her and the artist, it’s now thought that this is just Goya showing off; and certainly there’s little sense of emotional attachment. The Duchess is grand; she’s inaccessible; she’s defined by her rank and status rather than by her personality. It’s interesting to see that, while Goya’s men are often individuals, his young aristocratic women usually have similarly idealized pale oval faces, thick dark brows and clouds of frizzed hair. For me, broadly speaking, he’s less interesting as a painter of women than as a painter of men.

But of course there are exceptions. His full-length Portrait of Queen Maria Luisa of Parma is sensitive even as it is ruthless, showing the queen as the rather plain woman that she was, but gently filling out her cheeks to disguise the fact she’d lost her teeth by this date. Goya could be kind. Look too at his deeply sympathetic, but very honest Portrait of the Dowager Marchioness of Villafranca, whose dignity and warmth are palpable even as her jowls begin to softly sag and dark circles form under her eyes.

And one of the most remarkable portraits in the show is that of the Marchioness of Santa Cruz, painted as a Muse in 1805, shortly after her marriage. But, beyond the crown of vine leaves and the obligatory lyre, there isn’t much that’s mythological: this beautiful young woman reclines on a very contemporary divan, wearing a low-cut shift that’s so sheer you can see the dip of her navel beneath it. It’s a robust, mischievous, sexy picture and it seems terrifically daring for this date and social context. In the immediate context of the exhibition it’s also rather unnerving because you’ve seen the same woman, just a few rooms beforehand, as a pretty four-year-old in a group portrait of her family (the Osunas).

It also becomes clear that Goya’s own attention wasn’t always focused on the sitter in his paintings. Throughout his career his penetrating, shrewd portraits sit alongside pictures which fail to capture the same intensity. This can’t be blamed on Goya’s gifts as a painter, obviously, so perhaps implies that in the process of painting he became pleasantly distracted by some other part of the picture: the rendering of lace or decoration, perhaps; or incidental figures; or circumstantial detail. In The Family of the Infante Don Luis, the family themselves are rather posed and staid, but their servants have a much greater charge of reality; and the highlight of the whole picture is the man on the right, who grins broadly out of the canvas at us.

Similarly, the famous Portrait of Manuel Osorio Manrique de Zuñiga presents its young sitter with a delicacy and caution that neuters some of its power. But the little boy is accompanied by a cage of captive goldfinches in the lower right corner (as well as the cats who receive so much attention when people write about this picture). The birds in their cage are vividly alive, painted with streaks of green and white, and dabs of red. For me, this was the most dazzling part of the picture.

And I think that this aspect was one of the most interesting about the exhibition. While it’s aesthetically pleasing to look at a series of masterpieces, it’s more instructive to be able to compare the brilliant with the slightly less successful and to think about why there’s a difference. Was the artist less engaged? Did he find it difficult to relate to the sitter? Did he feel it wise to keep at an emotional distance in certain cases (like the young women whom he paints with such inoffensive grace)? 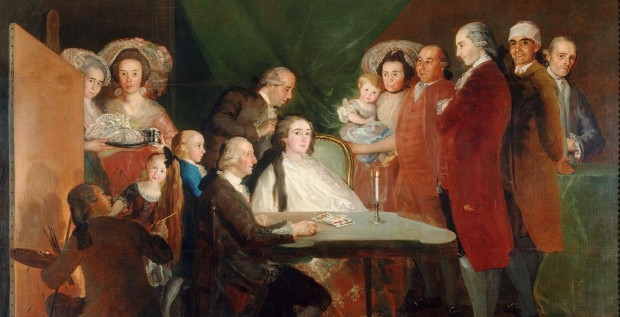 Francisco Goya, Portrait of the Family of the Infante Don Luis

But there’s one area in which Goya felt entirely free to scrutinise and harrow to his heart’s content, and that’s in his self-portraits. An admirer of Rembrandt, he subjected himself to the same self-investigation and it’s interesting to compare the self-portrait made in his early thirties (which opens the exhibition) with that painted thirteen years before his death (which you find towards the end). The technique is different, of course: the later portrait is freer and more dynamic, while the earlier picture is still influenced by the polished portraits of Anton Raphael Mengs, who’d been one of his teachers.

But in both you have a sense of Goya pushing, studying himself, trying to go beyond mere representation – on the one hand, the young man eager to impress and progress; on the other, a man worn out by the miseries of his country and his own misfortunes. And these are joined by a third image of the artist, the 1820 Self Portrait with Doctor Arrieta, in which Goya shows himself in the throes of a dangerous illness he’d recently suffered, tended by the doctor who had seen him safely through it. It’s a brutally frank portrait, a long way from the composed self-studies of earlier years. Both a shocking tribute to human frailty (Goya’s) and human endeavour (the doctor’s), it shows Goya exploring new themes and formats of portraiture even in the last years of his life.

Creative, insightful and technically dazzling, these are pictures that deserve to have time spent with them. No doubt the exhibition will be very popular, but be prepared to brave the crowds: this is a wonderful introduction to the lesser-known side of Goya’s activity as an artist, away from the dark horrors of the Caprichos. And I’ve barely scratched the surface here: I’ve left plenty of wonderful portraits for you to discover for yourself. (If you can’t discover them in person, you can do so through the catalogue.)

It’s especially recommended to those who enjoyed the psychological intensity and splendid costumes of the Moroni exhibition at the RA, because in many ways Goya is Moroni’s 19th-century successor: another portraitist who is able to pierce the carefully constructed façades of social status and fashion, in order to reveal the characters within. 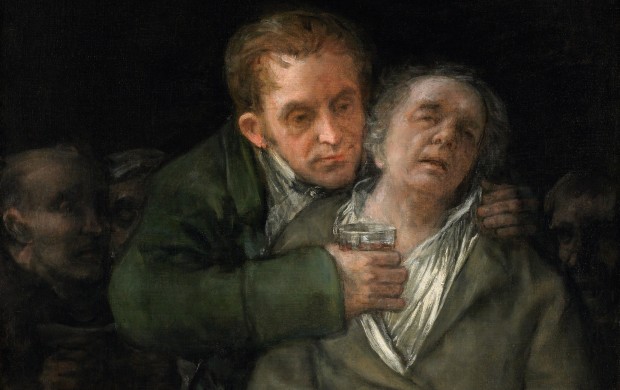