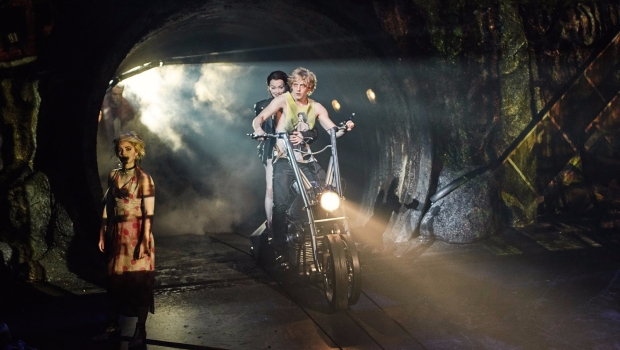 Step aside Monteverdi; step aside Mozart; the London Coliseum has temporarily swapped classical music for rock opera and it sounds great. The massive auditorium, in which Baroque music sometimes seems lost, now reverberates with electric guitars and drums and, for the first time that I’ve seen, was packed to the rafters. Jim Steinman’s new musical is a loving tribute to Meat Loaf’s exuberant, much-loved, irresistibly singable album, which was (incredibly) released forty years ago this year. With all the favourite songs present and correct, and a very strong cast, there are moments of sheer exhilaration. The music has lost none of its power. Fans will love it, though one comes for the music, not for the musical, which shuffles a sequence of set pieces into a lacklustre narrative that frequently feels contrived. This messy but exuberant show is one for existing adherents of the Cult of the Bat: it’s unlikely to make many new converts.

When I told a friend, with great excitement, that my parents and I were going to see Bat Out Of Hell: The Musical, I was greeted with disbelief. How on earth, asked my friend, could I love the rarefied esoterica of early opera and yet also enjoy stuff like this? Well, it’s fun. I don’t care if it’s from 1680 or 1980: if it leaves me fizzing and bouncing, then I embrace it. And second, Meat Loaf has a flamboyant, gleeful theatricality which isn’t a world away from the spirit of the Baroque storm aria. It’s a fact that there’s an unusual crossover in audience between Baroque music and heavy metal. I’m just taking that one step further. And besides, Meat Loaf dominated my childhood. I’m sure that my memories simplify reality, but when we went on long car journeys, we either listened to Handel’s Water Music or Bat Out Of Hell (I can still remember the excitement of getting Bat Out Of Hell II on tape after its release in 1993, sixteen years after the original). And now I am pretty much incapable of listening to Bat Out Of Hell or I Would Do Anything For Love (But I Won’t Do That) without singing along and going absolutely berserk on an air guitar. Fortunately most of the audience last night seemed to be in the same boat.

Raven (Christina Bennington) in her bedroom

Bat Out Of Hell is a close cousin of that other rock musical, We Will Rock You. Like that, it sets its story in a dystopian future with youthful rebellion and self-expression ground under the heel of a corrupt tyrant. Here that tyrant is Falco (Rob Fowler), who lords it over the crumbling city of Obsidian (formerly Manhattan) from Falco Towers. (Any similarity to a certain President of the United States is superficial.) In the streets and subways beneath Falco’s gilded world, Obisidan is a hardscrabble city of need and resentment. Resistance centres on the Lost: a gang of youths headed by the charismatic Strat (Andrew Polec), who were trapped decades before in a cave and, since then, have been miraculously frozen forever at the age of eighteen. Falco loathes these pesky kids who don’t have the decency to age like the rest of the population, but his teenage daughter Raven (Christina Bennington) – whose eighteenth birthday sparks off the show’s action – is dangerously fascinated by them. While her bored, half-sympathetic mother Sloane (Sharon Sexton) laments her own fading youth, Raven yearns to break out beyond the walls of Falco Towers and experience the world for herself. And, in the streets down below, the ever-young Strat is unable to forget his glimpses of the tyrant’s beautiful daughter in her ivory tower.

This is basically Peter Pan, with a side dose of Romeo and Juliet, and a seasoning of the Passion of Christ. The aesthetic is heavily influenced by We Will Rock You, channelling a kind of postapocalyptic rock chic that looks distinctly 1980s. Hair is big and backcombed; the women are more often than not in fishnets and boots; and the men are in leather and vests. Strat, rock god and unaging Messiah, wears the kind of tight black jeans that presumably had to be stitched on and has a welcome habit of mislaying his shirt. There are strobe lights; there’s dry ice; and there are, inevitably, motorbikes: great growling choppers with high handlebars and the occasional sheep’s skull strapped to the front. It is all high camp, preposterous, silly beyond belief, and yet its fundamental nonsense is saved by epic performances from the talented young cast. 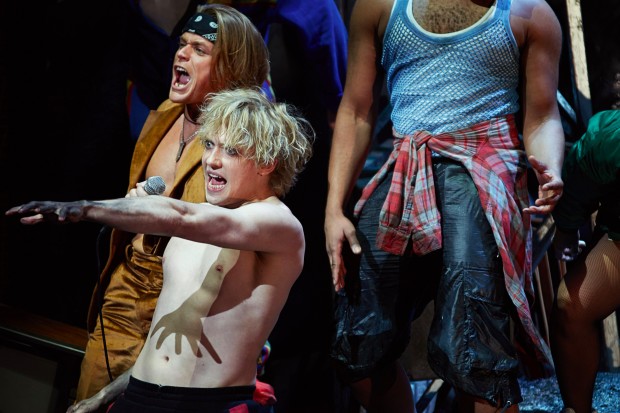 You must forgive me if at the time I never quite managed to figure out who’s who among Strat’s gang, but his three main sidekicks (Giovanni Spanò’s Ledoux and Patrick Sullivan’s Blake among them) had diverse yet strong voices, one gravelly, one sweet. They shared some of the songs between them, most memorably Objects in the Rear View Mirror May Appear Closer Than They Are, which here became a haunting ensemble piece in which the Lost remember their boyhoods before the change of agelessness came upon them. It turned into a vigil, a confession, and was beautifully performed. The one Lost Boy whose name I did get was the aptly-christened Tink (Aran Macrae), the baby of the gang, who resents being eternally treated as a little kid by Strat, for whom he nourishes a passionate and destructive unrequited love. And, from among the girls, the one who made the greatest impression was Zahara (Danielle Steers), whose incredibly strong, sultry low voice was absolutely perfect for the sensual swagger of the music. Her duets with her hopeless admirer, the green-haired Jagwire (sung at this performance by Olly Dobson), were two greats: Two Out Of Three Ain’t Bad and Dead Ringer for Love.

Falco and Sloane had their moments too. Quite a few of their songs were unfamiliar to me, presumably new pieces written for the musical (which, predictably, didn’t have the flair of the classics), but they also had some of the old favourites. The most exuberant was, without doubt, Paradise by the Dashboard Light, in which this middle-aged couple lost themselves in memories of their courting days, to the horrified embarrassment of their daughter. I have to make a special point of flagging Fowler’s voice as Falco: the strongest and richest on the stage and the closest to that of Meat Loaf himself. As for the said daughter, Raven, her voice was the diametric opposite of Zahara’s. If Zahara was a woman who knew the world, who’d been around the block and had her heart broken, Raven was the virginal innocent, sweet and ready to be shown all the pleasures of the world: a Juliet trembling on the brink.

But the star of the show was always going to be Strat, and Andrew Polec gave it his all. With a lighter voice than Fowler’s, yet still capable of the soaring full-bloodedness of the big title track, he was a troubadour frozen in time, a romantic rebel with all too strong a cause. Enchanted by his girl, devotedly tender to his friends, he was undoubtedly too good to be true. And he looked the part too. Lithe and snake-hipped, with a tumbling mass of sweat-drenched golden curls, he was a rock hero par excellence: a kind of postapocalyptic Orpheus who would do anything for love (well, almost anything. But not, you know, that). His baffling but much appreciated habit of losing his shirt helped too. I’m trying to avoid quoting the phrase about the guitar from Wasted Youth, though it feels appropriate: ‘a heart of chrome and the voice of a horny angel‘. 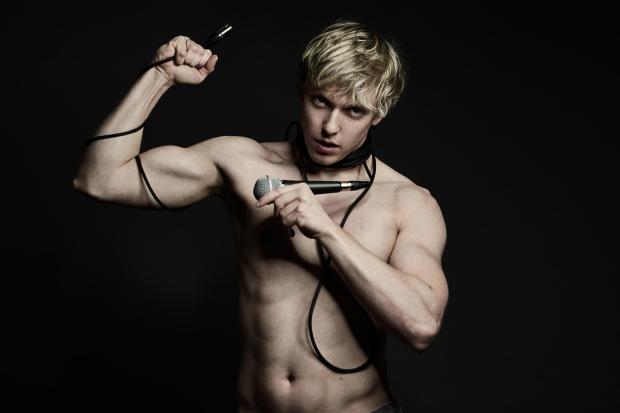 Strat (Andrew Polec). Just in case anyone was wondering. Fine figure of a man.

There were times when the set and staging was mind-blowing, like the epic performance of Bat Out Of Hell at the end of the first half. The clever use of a ‘room’ above the main stage for Raven’s bedroom, and the broadcast of her actions on a big screen (both handy for the audience, and a sign of the constant surveillance Falco inflicts upon her) worked very well to offer variety in the space. All in all, it was an intelligent and creative staging. We had high hopes for the finale, but I have to say that after the drama of Act 1 it felt a tiny bit flat in comparison. I thought they’d missed a trick by not having a motorbike soaring up and out over the audience, which surely wouldn’t be that hard to do with an expanding strip from the stage – but hey, there were remote-controlled bats and flames on stage. Two out of three ain’t bad, as they say.

Quite frankly, the music was king here. The audience began singing along in Act 1, shyly at first and then with increasing gusto in the second half. There was a running gag about Strat’s efforts to quote poetry to Raven – ‘On a hot summer night, would you offer your throat to the wolf with the red roses?‘ – and her failure to answer properly (‘You’re supposed to give a response,’ Strat would say wearily) until the second half, by which point Raven’s responses (‘Will he offer me his hunger?‘) were answered by the audience as enthusiastically as by Strat himself. All 2,000+ people in that theatre clearly knew the albums pretty much off by heart and led to the final reprise of Bat Out Of Hell, an awesome rendition in which every person in the house surged onto their feet and sang along, and the guitars throbbed out so that the very floor vibrated. Epic.

So: don’t go to this for the plot because it’s daft as anything and doesn’t make any sense. But if you have a fondness for Meat Loaf (even if you don’t usually admit it), for outsized 1970s hair metal, or for operatic rock, there are moments in this show that’ll leave your eyes shining and a grin a mile wide on your face. I struggled a bit when deciding how to rate this: for effort and talent, the cast deserve five stars, and that final scene in Act 1 is sheer gold. But I can’t get over the fact that the great performances and the classic songs are held together by a fundamentally threadbare plot which – even by the standards of other rock musicals – is pretty thin. That said, you don’t remember the plot. You bound home with Bat Out Of Hell reverberating around your skull, striking daft poses and playing air guitar, and for that I suspect this show is going to be much loved. 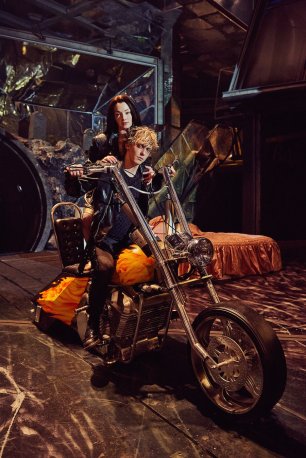