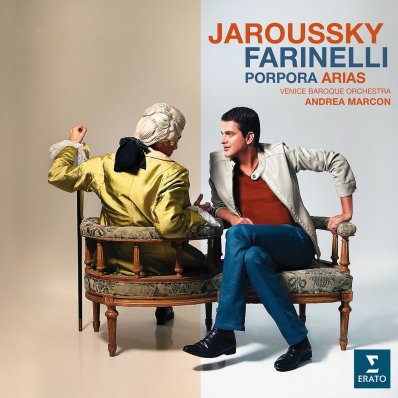 Listen to this for: what it says on the tin. Much Porpora

The combination of Jaroussky and Farinelli was too much to resist; and I loved the cover, with the two of them just hanging out having a chat. I have to be honest and say that I’m a little less fond of this album now than I was when I first bought it. That’s because I’ve developed a taste for slightly more rounded voices and more power behind the flashy kind of arias. However, there are still some stunning moments here: the opening Mira in cielo is full of drama, and Come nave in ria tempesta from the opera Semiramide is a real showpiece. There are also a couple of duets, including La gioia ch’io sento from Mitridate – and I believe I’m right in saying that Jaroussky is singing here with Cecilia Bartoli. I can’t think of a better modern parallel for the great Baroque pairings of primo uomo and prima donna. Of course, Jaroussky also does Alto Giove here, which develops into a jewel of modulated elegance that melts your kneecaps slightly when you listen to it. For sheer purity and delicacy, it’s a stunner.