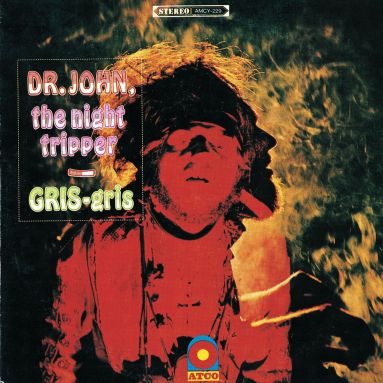 OK. Dr. John. This is a completely different can of… gumbo. Now we are in the swamps of Louisiana amongst the Cajun folk whose French influences had a major impact upon the culture and cuisine of that region and, of course, New Orleans. (Movie link: Angel Heart and more loosely Deliverance, Southern Comfort, Big Easy.) This came out in 1968 (I was 16) and mainstream Britain hadn’t really heard anything this spooky before, though the more homely New Orleans jazz sound was a major part of Trad Jazz as it was then known.

The music is a vibrant mix of swampy voodoo chants, New Orleans jazz and local Native American ‘ceremonial’ (festive) music. At times it is darker than a Stephen King nightmare (Walk on Gilded Splinters) but then it has its funky moments (Mama Roux) and at times soars with the spirit of the marching bands at Mardi Gras. It is a breathtaking mix that, like Van Morrison, I haven’t stopped playing since I first got it.

Anorak note: I saw the Doctor at Bristol University in 1972 playing this music and was transfixed. I haven’t missed the opportunity to see him when he’s toured this country since and have most of his albums on my shelf. Ever since then, I’ve been adding Southern US ‘swamp’ music to my collection as well. Love it!