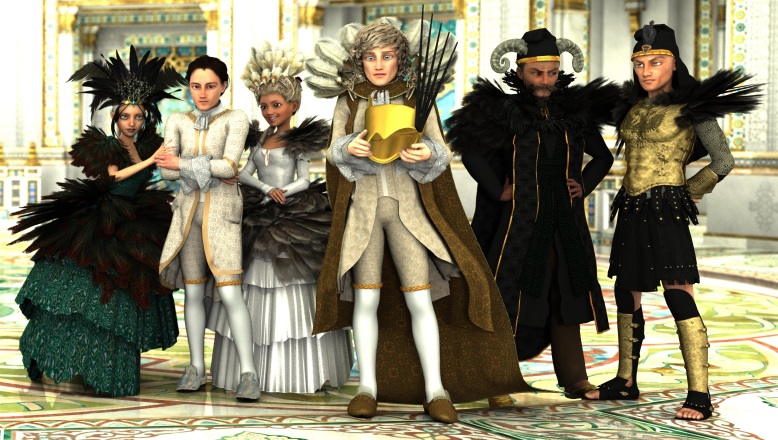 For someone who doesn’t have much free time, I have a nasty habit of coming up with ideas for projects. If I find myself thinking, ‘Wouldn’t it be fun if…?’, I know that I’ve just committed myself to weeks or months of slaving away on something.

As long-time readers of this blog will know, I am very fond of the opera Artaserse. And, at some point on a cold, rainy Sunday afternoon back in the winter of 2014, I decided it would be a great idea to create a graphic novel telling the story behind that opera. Had I realised how much work it would be, I might have thought twice, but I ploughed on with a mixture of creative ambition and desperate naivete. Eight months later, it was finished and I’ve now published it as a print-on-demand comic. It’s available in hardback and paperback. Both are on the expensive side, I’m afraid, but you’ll pay exactly the same for a copy as I do, so I can’t say fairer than that. There is also a much cheaper PDF ebook, available from either the hardback or paperback link.

There are several sections to explore here on this page. If you are a complete newcomer to Artaserse, then please read the General Notes below and then click here for a brief further explanation. If you are already an established fan, then you might want to click here to read about the changes I’ve made from the filmed version of the opera. And, if you’re wondering how I tackled the historical appendix (I even recreated the Ishtar Gate: yet another mad idea that sounded reasonable when I first had it), you can take a quick look here. At the very end there’s a series of character portraits so you can get to know them better. Enjoy the images that I’ve included throughout the page and, if you decide to take the plunge and buy a copy, please do come back and let me know what you thought.

Act 3: “Imagine water parted from the sea.” Arbace (right) embarks on a somewhat complex metaphor for how much he’ll miss home, while Artaserse (left) listens indulgently

You may be thinking that it’s pointless to take something defined by its music and reduce it to a silent, still format; but that’s not what I’m doing. The graphic novel is based on the libretto written for the opera by the poet Pietro Metastasio: essentially, this is a play. My project began as a way to explore that story: the poetry, the characterisation and the complicated tale of murder, love and intrigue at its heart: a tale which I feel is strong enough to stand alone. I was even more motivated by the discovery that the plot is based on fact and many of the characters were real people. As a result I’ve been drawn into the world of Achaemenid Persia, which has turned out to have intrigues, romances and vicious revenges far more compelling than anything that opera can supply. And I’ve been hugely encouraged by the fact that about half of the people who’ve got in touch about the graphic novel so far are not Baroque opera fans and have never seen Artaserse before. They’ve simply enjoyed Metastasio’s story.

However I’ve been very influenced by the aesthetic of the 2012 production of Artaserse, available on CD and DVD, with its original music by the Neapolitan composer Leonardo Vinci. For those who don’t know, this production had a big impact in the world of Baroque music. A lot of people I’ve met in that community have a great fondness for it, as do I. Hopefully these aficionados will forgive me for, perhaps, not taking the story entirely seriously in places. (For all that, I want to emphasise that I have always striven to preserve the feel of the original.)

Act 2: ‘Hush, leave this to me’. Artabano seeks to secure Megabise’s good faith by brokering a marriage between him and Semira. Semira, it turns out, is far from amendable. Here you see the characters in their Act 2 Baroque-style costumes

1) I am not a graphic artist. I am a historian. The graphic novel was created using DAZ Studio, a program which I’ve been using for several years as a hobbyist. This is just meant to be a bit of fun, so if there are professional graphic artists out there, please don’t be too hard on me.

2) I have absolutely no connection or contact with any of the companies involved in producing the 2012 version of Artaserse. Similarly, I hope that in doing this I haven’t trodden on anyone’s toes. My efforts to reproduce costumes and characters are inspired by that production, but I hope there is enough of my own imagination in there to avoid causing offence.

3) The translation is my own and it was never meant to be slavishly accurate. My aim is to tell the story and to try to give each of the characters their own personality, rather than literally to translate all of Metastasio’s poetry. Nevertheless all the arias are present and correct in some form or another.

NOTES FOR THOSE WHO HAVE NOT SEEN THE DVD

In Act 2 you will find that the characters have changed into 18th-century costume, and in Act 3 you will discover that they’ve changed again, back to similar costumes to those they wore in Act 1. There is no profound significance to this. I’m merely keeping in line with the spirit of the filmed production, in which Act 2 is the sign for everyone to suddenly turn up in frock coats and big Rococo gowns. 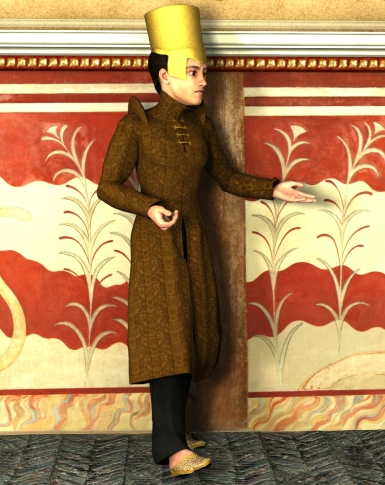 Act 3: Mandane, torn between duty to her father and her own heart

NOTES FOR THOSE WHO HAVE SEEN THE DVD

So, you’ll have the advantage of being able to follow what’s going on, but you will notice all those niggling little moments where I’ve deviated from the story as we know it. Here I try to explain the reasoning behind those various changes.

In Act 2, you will see that I haven’t copied the costumes directly. Much as I love crazy wigs, I decided it’d be confusing to have all the men wearing exactly the same costume, as happens in the film. Thus I’ve given each of the male characters a different costume and I’ve done away with the wigs.

In Act 3 you will find some scenes that aren’t familiar. In the Vinci production that we know and love, Act 3 has been extensively cut. We lose two arias, Mi credi spietata and Forsennata, che feci? (which fortunately are included on the CD) and a good portion of recitativo that adds some major character development. I have included both arias here: they’re important because they show us both female characters in a very different light. Semira finally develops a bit of steel, and Mandane shows a greater self-doubt and fragility than we’ve seen in her before, except possibly in Se d’un amor tiranno.

The Vinci Artaserse, however, entirely omits one of the most dramatic moments in Metastasio’s libretto. This scene, which is purely recitativo and happens immediately before the famous duet, does appear in settings of the opera by Hasse and Terradellas. I’m not sure whether Metastasio added it in later, or whether Vinci cut it, or whether the team behind the 2012 production thought it was a bit heavy and chose to leave it out. However I think this little scene is crucial to understanding the duet, so I’ve put it back where it belongs. Without it (as on the DVD), you get the impression that Mandane is little more than a termagant and you may wonder what Arbace sees in her. But in this short but moving scene, Metastasio shows us her utter desolation when she believes that her actions have led to Arbace’s death. Her despair, and Arbace’s timely arrival to save her, give the duet extra poignancy and significance.

I’ve also included the duel. Metastasio unforgivably has this happen off-stage: Mandane simply comes on and tells us the result. I’m the kind of girl who can’t say no to a bit of swashbuckling and, if a dramatic story is meant to end with a great duel between the hero and the villain, then I’m darn well going to have that happen onstage, thank you very much. Hence the need to invent Arbace’s speech to the people of Susa and the dialogue in the duel itself.

Quite frankly, there’s more of me in Act 3 than there has been in the previous acts. Metastasio left too many gaps that needed filling, and I’ve become quite fond of the characters, who began to ad-lib here and there. So forgive me: but I promise the story is absolutely faithful to the libretto even if the words aren’t an exact translation. I hope the sense and spirit are still intact. 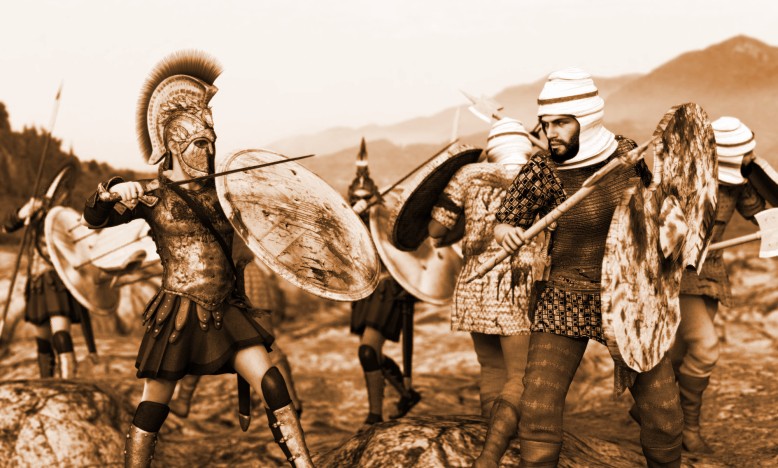 The Historical Appendix: My attempt to condense the Graeco-Persian Wars into a single frame of a comic

There is little to say about this, save to note again that Metastasio has carried out a major hatchet job on poor Megabyzus, who is demoted to being secondary villain in his own story. The appendix is all true, to the best of my present knowledge. Megabyzus was indeed one of the most brilliant generals and tacticians of his age, and his treatment at Artaxerxes’ hands smacks of royal ingratitude: it reminds me very strongly of Justinian’s behaviour towards Belisarius. I wanted to balance the opera’s fiction with historical ‘fact’.

However, it proved to be extremely difficult to recreate Achaemenid Persia through the medium of DAZ Studio, so I beg your indulgence. This is merely a summary of an extremely dramatic and exciting story. If anyone would like to hear more about Amytis and Megabyzus, there may be something coming here on the blog soon, but in the meantime all you need do is buy me a drink and I will oblige with great pleasure.

Just to finish off, here are our characters in a series of candid portraits which might help you gain a better idea of their respective personalities. Click on the image for a larger picture and some information on who they are.

Arbace, Artabano’s son and Artaserse’s best friend. Extremely noble. Spends a lot of the opera wondering why this gets him into so much trouble

Megabise, General of the Persian armies. Perhaps not quite as loyal as he should be 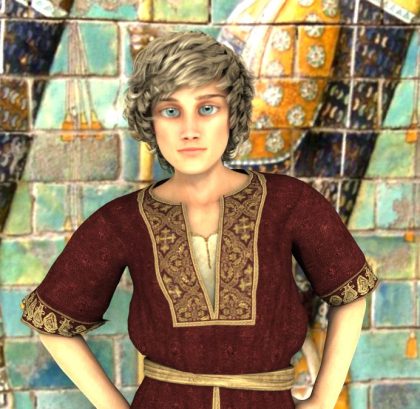 Artaserse. Prince, then king, of Persia and generally nice but hopeless 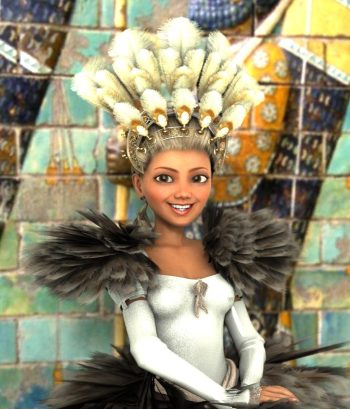 Semira, Arbace’s sister and Artaserse’s girlfriend. Sweet and a bit too nice for her own good

I would love to know if you read and enjoy the comic. Please take a few moments to leave a comment here. You will brighten my day by doing so. Thank you.

26 thoughts on “Artaserse: The Graphic Novel”