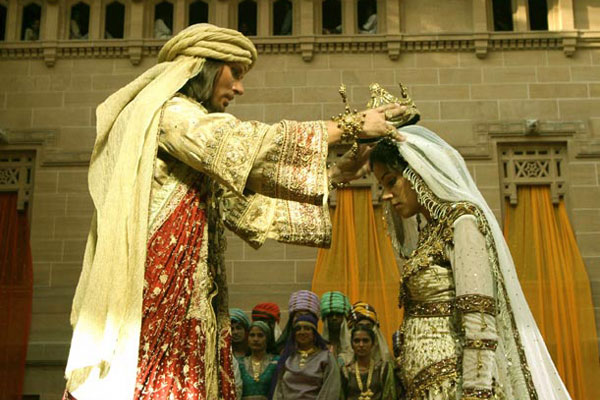 It’s a great title, isn’t it? I can feel your disbelief from here. ‘What,’ you’re thinking, ‘can have possessed her to watch a film with a title like that?’ Well, read on, my friends. It will  all become clear. I’ll give you a clue. The king of the title is Xerxes.

You might be forgiven for thinking that my Xerxes Project is simply an excuse to watch lots of operas and make jokes about plane trees. I won’t deny that there’s some truth in that. But hopefully you’ll have deduced from my recent post on the new biography of Xerxes that I also have a serious interest in him as a historical figure and Achaemenid Persia generally. As a complement to my reading, I thought it would be fun to look at how Xerxes has been represented on film: something that turned out to be very easy because there really isn’t much. In fact we can broadly boil it down to 300 (aesthetically appealing but perhaps not entirely historically accurate) and a few religious dramas about Esther. It’s thanks to the Book of Esther that Xerxes (aka Ahasuerus) has made his greatest impact on Western art, and I thought it was time to see cinema’s take on this story. Hence: One Night with the King.

I had a sneaking feeling the film wasn’t going to be historically accurate, and was also aware that I wasn’t the target audience. The film was made as an inspirational story about the foundation of the feast of Purim. It isn’t aimed at nit-picking historians who sit spluttering in indignation because someone’s wearing a crown from the wrong millennium. However, Xerxes was in it so I was damn well going to watch it anyway. And, to give the film credit, it actually surprised me by being bad in ways I hadn’t even begun to imagine. The writers had tried to flesh out the story to give the characters a bit of depth (it didn’t always work, but they tried) and they’d obviously put a lot of money into the sets and locations (it looked more like fantasy medieval Baghdad than ancient Susa, but never mind).

However it was all hamstrung by a magnificently bad script, and there was plenty of opportunity to be annoyed by this right from the start. In one of the earliest scenes Xerxes is gently undermined by his soon-to-be-ex-wife. ‘You’re not a warrior, are you?’ says Queen Vashti sympathetically, to the man who assembled one of the greatest armies of antiquity, marched thousands of miles around the Aegean, and did a fairly stellar job of annoying the Greeks. I’m not asking the scriptwriter to sit down and read Herodotus, but is a brief trip to Wikipedia too much to ask? There was also an attempt to create a more elaborate story, by adding a second plot on top of the eunuchs’ intrigue discovered by Mordecai. This one involved scheming courtiers, who just happened to be the chief of Xerxes’ bodyguard (i.e. Haman) and one of his nobles, who skulked around in corners plotting to kill the king. This gave me a great deal of pleasure, as you may imagine, and provided some possibly unintentional operatic and historical parallels.

Xerxes (Luke Goss), suddenly stricken by the realisation that his crown is historically inaccurate

Xerxes is played by Luke Goss, formerly known as half of the 1980s boyband Bros. The result is pretty much as you would imagine. Most of this is not Goss’s fault. He nobly does what he can, but he’s desperately miscast: you can’t imagine this Xerxes organising a WI coffee morning let alone an invasion of Greece.* Goss spends much of the time looking confused and vaguely concerned, probably because he’s deeply troubled by historical inaccuracy. He’s meant to be playing a belligerent ancient Persian monarch but instead has to spend most of his time moping around in a suite of rooms with romantically billowing draperies. Furthermore, he’s been decked out in a distinctly early medieval crown and robe combo that makes him look like Richard II rather than Xerxes.** And, to add insult to injury, this Xerxes is also remarkably sexless for a man who allegedly had over three hundred concubines, and who occupies the alpha male role in a story about harem politics. When interviewing nubile young girls for the position of second wife, this Xerxes invites them to his bedchamber and asks them to read aloud from the daily palace reports while he chastely engages in a bit of amateur sculpture behind a gauzy curtain. You have to feel for the man. I suspect the real Xerxes, for all his quirks, would be turning in his grave at the thought.

The natural consequence is that one warms to Haman, the undisputed baddie of the piece, who helpfully wears black and often adopts an expression of wild-eyed imminent berserkness, just in case we had any doubts. But the film complicates things by giving him a backstory, explaining his animosity towards the Jews as the result of the genocide of his entire tribe. Thus he occupies the uneasy position of driven avenger rather than outright villain, which makes him one of the most interesting characters in the piece. This is not, however, saying much.

Haman (James Callis) in a brief break from chewing the scenery. He gets Brownie points for having a Persian-style fabric on his sleeves

For all that, I found it difficult to take Haman entirely seriously because I know James Callis best as the very camp friend Tom in the Bridget Jones films. But he certainly did his best here with a lamentable script, prowling around looking brooding and chewing the scenery, which is all that any self-respecting British actor can do when faced with something of this sort. And yet Haman was clearly doomed: he couldn’t see the Stars of David that were magically refracted through Esther’s special pendant, which testified to the possibility of redemption and which Xerxes crucially, can see.

The film is slightly naughty in that it places Peter O’Toole and Omar Sharif at the top of its billing, when Sharif has a minor role as a Persian satrap and O’Toole is in the film for all of two minutes at the beginning, glowering and chewing the remaining scenery and probably receiving a very nice salary for doing so. Less prominent in the billing is John Rhys Davies, who plays Esther’s guardian Mordecai and who turns in one of the most engaging and professional performances in the entire film.

Esther herself is implausibly perky and manages to capture Xerxes’ heart by her storytelling talents. As he toils over his sculpture, she catches his attention by deviating from the dull monotony of palace reports in order to tell him the story of Jacob, Rachel and Leah (there were shades of Scheherazade). Xerxes is captivated – he evidently doesn’t know the story despite the prominent Jewish population in Persia – and the filmmakers want us to feel the same. Their Esther is meant to be lovable and modern (at which the alarm bells should start ringing): the quintessential Biblical girl-next-door. However, I must warn you that in fact she comes across as the BC equivalent of a manic pixie dream girl, irritating me profoundly after about three minutes.

A glimpse of the CGI set, which must have been designed after careful study of authentic Persian architecture – whose influences were studiously avoided

Esther’s kittenish interaction with Goss’s limp Xerxes is clearly meant to strike us as a passionate meeting of kindred spirits, but this simpering romance causes its own problem. As viewers we’re never given a chance to really understand the complex rules of courtly life in Persia. The lingering glances and sighs obscure the significance of the crucial scene where Esther goes against all custom and bursts into Xerxes’ audience room uninvited, begging for the preservation of the Jewish people in the face of Haman’s planned attacks. In reality such an act (along with virtually anything else that annoyed the king) ran a very real risk of the death penalty. Here, in the film, we don’t believe for a minute that Xerxes is going to do any harm to Esther and so her courage and the central power of the story is undermined. After all, everyone loves her – from her ill-fated cousin, who has an unfortunate run-in with a castrating knife, to the gruff guardian of the harem, who must have the deepest bass voice of any eunuch in history. Yes, everybody loves her. Everybody but me, I’m afraid. Oh, and Haman, obviously.

I’m sorry to say this scores fairly highly on my personal Tosh-O-Meter and should be avoided unless, like me, you have a strange compulsion to stalk one of the characters through history. That said, I’m aware that it is based on a popular novel and that a lot of people on the internet have great affection for the film (I glimpsed fanart via Google Images). What one can say for it is that it’s family-friendly, earnest and won’t scare the horses, and that if I was looking for a nice family film to watch at the time of Purim I could probably do worse. It does not, however, do Xerxes or his world any justice. If it were just pure fantasy it might not be so bad, but it’s meant to be a historical film (even if Esther and Mordecai probably didn’t exist, as Stoneman argues). And there’s nothing of 5th-century BC Persia here and less still of the swaggering, domineering, hubristic brat-prince that we all know and love.

The funniest thing about the film, however, is the opportunism of the production company. When Prince of Persia became so popular a few years ago they reissued One Night with the King, took a new cover photo of Esther wearing fantasy-style Baghdad costume and wielding a couple of daggers, and renamed the film Princess of Persia without making any changes at all to the content. Reading the Amazon comments on this particular edition is a complete joy, because the baffled punters were forced to deal not only with the fact that it is a painfully bad film full-stop, but also because it bore absolutely no resemblance to what appears on its cover. Classic.

The original DVD cover for One Night with the King

The revised DVD cover for One Night with the King. Sorry, ‘Princess of Persia’

* In the interests of complete and utter justice, there is one point where Xerxes is shown inspecting his army and sparring with one of his generals, but this seems to be an excuse for Goss to get his top off rather than for any serious purpose of characterisation. I could have missed a vital character point, though.

** Sometimes, to be fair, he also looks like an Indian prince from a Bollywood film. Esther veers between Biblical epic and Bollywood, but I don’t think actually comes particularly close to ancient Persian on any occasion.