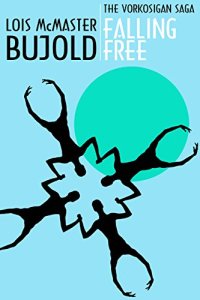 A couple of points before I begin. First, there are numerous different entry points into the Vorkosigan Saga and I’ve based my reading order on the inner chronology of the series. This is not the only reading order: it just happens to be mine. Secondly, you might object that you can’t really have a ‘Book 0’ of a series. Well, this is a prequel to the main saga, set 200 years in the past, and you could even argue that it doesn’t really belong to the Vorkosigan Saga at all, because it doesn’t involve any of the same settings or characters. Nevertheless, it’s set in the same universe and people have told me that I should read it, so here we are. I thought I’d go back to Falling Free before getting stuck in to Miles Vorkosigan’s story arc in The Warrior’s Apprentice. I will confess to a moment’s alarm when I saw that this was a novel about futuristic welding engineering – not one of my strong points – but, as ever with Bujold, it actually turned out to be a story about people… ethics in space, which is a subgenre that she really has made her own.

When the experienced engineer Leo Graf arrives at his new posting – the orbital Cay Habitat maintained by the firm GalacTech – he is greeted by Tony, one of the Habitat’s ‘permanent residents’. Leo is shocked: in this unregulated corner of space, GalacTech have delved deep into the forbidden ethical dark corners of bioengineering, and have created a community of workers perfectly adapted to their zero-gravity workspace. With two extra arms replacing their legs, and systems which can resist the debilitating effects of ‘null-gee’, these workers are GalacTech’s vision for the future: a new generation which will rewrite the rules of working in zero-gravity off-world environments. Leo’s initial, instinctive horror gives way to admiration as he gets to know Tony and the other young people – for they are all little more than children, born and reared in the Habitat. They are all radiant, enthusiastic, gifted young techs. But, as Leo learns more about the Habitat from its suavely sinister director, Bruce van Atta, he finds his ethical alarm bells ringing. It isn’t just the creation of the Habitat’s workers – known colloquially as Quaddies – that worries Leo. It’s how GalacTech intends to treat them.

This is what I like about Bujold. She’s a bit like Asimov: not just interested in creating technologies but in questioning what our responsibilities are in doing so – both to us and, if they are sentient, to the technologies themselves. And so she leads us into a tangled ethical forest as Leo gropes his way through GalacTech policies about the Quaddies – who are, needless to say, completely innocent of the bind they’re in. They are naive, blindly trusting in those around them, whom they believe to have their best interests at heart. But Leo, as a bipedal ‘downsider’, knows this simply isn’t so. During his induction, van Atta crows to him about the legal situation: ‘I don’t think you’ve quite grasped the beauty of this set-up. They don’t quit. They aren’t employees. They’re capital equipment. They aren’t paid in money.‘ GalacTech have found the perfect solution to the modern labour problem: indentured slaves who don’t even realise they’re enslaved, and who are ‘self-replicating’. But worse is to come, for the Quaddies don’t even have the most basic rights. GalacTech has registered them, not as human workers, but as ‘post-fetal experimental tissue cultures‘. Legally, they can be destroyed at the culmination of the ‘experiment’. And soon word comes that a viable anti-gravity system has been invented, which, at one stroke, erases the usefulness of Quaddie technicians (for, while four arms are useful in null-gee, they’re worse than useless under gravity). Panicking, Leo must try to come up with a way to save these talented young people from the machinations of their employers – but is there time?

Yes, there are long scenes in which Leo and his new pupils discuss engineering welds and there are some hard sci-fi tech episodes. (Apparently Leo is based on Bujold’s father, an engineer, and she strove to get it all right, though I certainly don’t have the ability to judge.) However, this space-cadet business is all set alongside careful character development, and we get to spend time with a small band of key Quaddies, including the gifted Tony, his loyal girlfriend Claire (their attachment being one of the things GalacTech is keen to prevent), and their friend Silver, whose alluring looks hide a shrewd strategic mind. Bujold takes the time to ensure that we, unlike GalacTech, come to care about these technicians as individuals, people who have the right to dream of a better world, and the talents to make it happen. And, as Leo begins to teach the Quaddies to challenge their preconceptions, and to think beyond the world they’ve known so far, you find yourself hoping against hope that they will succeed.

I enjoyed the book – a perfect diversion for a lockdown afternoon at my sunny window – and I think it was good to read it now, before I get too caught up in Miles’s storyline and wanting to see how that develops. Falling Free has a great concept and endearing characters, and offers a thought-provoking glimpse into the past of Bujold’s universe. And, even though it’s an independent story, it does have a few links: it sets the scene for some things yet to come (the Quaddies reappear further down Miles’s timeline, in Diplomatic Immunity, so it’ll be interesting to see how their culture and society have developed over the centuries). It also features some technology, in nascent form, that’ll be familiar to those who’ve read other books in the Vorkosigan Saga. The creation of the Quaddies has been made possible by uterine replicators, which are so crucial to the Vorkosigan family in Barrayar, and although this is a story of engineering, not war, plasma arcs already make an appearance.

A mixture of tech and heart, this is a fine standalone sci-fi story with villains who make you gnash your teeth, heroes you can get behind, and an ethical question that feels even more relevant today – with gene editing already taking place – than it did when Bujold wrote this story in 1987. A pleasant glance aside from the main core of the Vorkosigan novels, and one that gives a sense of the richness and breadth of Bujold’s canvas.

Next in the series – Shards of Honor