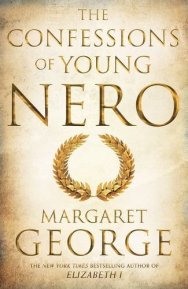 The only novel I’d read by Margaret George was Helen of Troy, some years ago, which didn’t quite do it for me, but I was keen to try her new book, the first of a pair, about the Emperor Nero. Set in the duplicitous, cutthroat world of the Roman imperial family in the first century AD, this had the scope for plots and psychosis aplenty, an impression encouraged by its titular promise of ‘confessions’. I hoped for something along the lines of I, Claudius, taking the story of the Julio-Claudians into the next generation with the same kind of meaty detail that I enjoyed in Tom Holland’s Dynasty. However, George’s decision to take a revisionist viewpoint, and present Nero as a well-meaning, misunderstand and popularly-beloved emperor, means that much of the story’s dramatic flair is sacrificed.

END_OF_DOCUMENT_TOKEN_TO_BE_REPLACED

Although I bought this more than a year ago, I’ve only just got round to reading it, mainly because Helen recently reviewed another of Margaret George’s books, Elizabeth I. Remembering that I had this novel on my shelf, I decided it was time to take the plunge (at 747 pages long, it’s quite a commitment). It’s the first of George’s books that I’ve read, so I wasn’t quite sure what to expect, but I’m sorry to say that it doesn’t quite match up to Helen’s report on Elizabeth. While I could see that a lot of research had gone into it, it never developed the alluring sparkle and epic grandeur that I’d hoped for from the woman whose face launched a thousand ships.