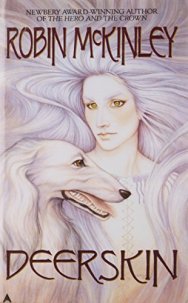 Fairy tales were originally born as dark things, a world away from the pastel-coloured sugar of Disney’s princesses, and they weren’t always meant for children. They were ways of rationalising the brutalities of life, of creating a happy ending beyond the horrific events that might be suffered. Fairy tales deal with infanticide, child mortality, forced marriages, murder and child abuse and yet Robin McKinley’s Deerskin is based on a tale (Donkeyskin) deemed so particularly unpalatable that it’s rarely published, even though it was originally written by Charles Perrault. With grace, sensitivity and compassion, McKinley turns this little-known story into a powerful tale of self-healing.

END_OF_DOCUMENT_TOKEN_TO_BE_REPLACED

Following T. Kingfisher’s instructions in the author’s note of Bryony and Roses, I sought out Robin McKinley’s Rose Daughter, which had inspired Kingfisher to write her novella. It was odd reading it so soon afterwards and I should, in retrospect, have left it much longer before going back to the same theme. While Kingfisher’s story didn’t spoil any of McKinley’s plot for me, it actually overshadowed it, being a more sophisticated and subversive take on Beauty and the Beast. McKinley certainly makes the story her own, but I didn’t find her heroine anywhere near as appealing as Kingfisher’s Bryony.