Well this was something a little different from the usual. Have many people seen it? I’m still trying to make up my mind about it, and I’d be really interested to know what other people think. I decided to go to see it because I really liked Terrence Malick’s last film, The New World and since The Tree of Life had won the Palme d’Or at Cannes, it promised to be worth watching. So off I trotted to the cinema.

Both films have a very similar feel to their cinematography: man is placed firmly within the wider scope of nature, with long shots of trees and water; the camera revels in soft, bright light, bleaching the skies and seeping through rustling leaves; and there is a tendency to show meditative shots of faces without any words being spoken for a long time. With both films, I got the sense that the real conversations don’t take place through the rather sparse dialogue, but rather through glances, the brush of hands, embraces. This choice has a different effect in each film. In The New World, where there’s initially no shared language between the two protagonists, it adds great intimacy and naivete to their interactions. In The Tree of Life, it has more troubling implications: that certain things cannot, or dare not, be said for fear of disturbing the equilibrium.

For all that, I personally feel The New World was more successful, but that probably says more about what I look for in a film than it does about Malick’s achievements as an auteur. I found it difficult to make a connection between Sean Penn’s weary, modern-day malcontent and the childhood he remembers; I wasn’t even sure which of the brothers he was (presumably the eldest one, whose viewpoint we seemed to follow?), and why he was remembering it all so vividly at this point in his life (had his mother or father died?). 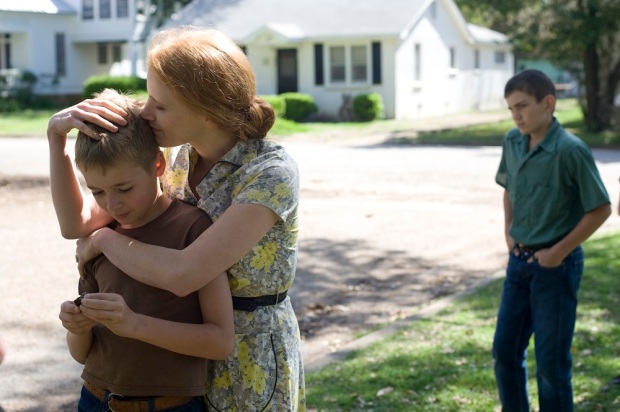 Mother (Jessica Chastain) with her boys

The parts of the film I enjoyed the most, and which were simplest and most moving, were those which followed the three young boys and their parents – their firm, old-fashioned, devout and overbearing father, and their pretty, free-spirited, girlish mother. Neither of the parents was happy, although the father’s discontentment seemed to come from within, and the mother’s from outside – specifically, from her husband’s troubled attitude. I think I’m right in assuming that Malick meant the parents to represent the two alternative ways of approaching life, which he introduces at the very start of the film – the father as the ‘way of nature’ (ambitious, selfish, putting one’s own needs before those of others), and the mother as the ‘way of grace’ (glorying in the beauty of the world, mild, tractable, full of peace and gentleness).

There were aspects of the film which I found extremely self-indulgent and pretentious. I thought the extended interlude, showing the formation of the world and the evolution of life, was unnecessary. Even if I can vaguely understand what Malick was trying to do, it reminded me rather unfortunately of one of the sections of Fantasia. And I think the dinosaurs should have been left out. They added absolutely nothing to what Malick had already achieved with this section, and they made his film absurd. People laughed, in the cinema I was in. A girl sitting along from me burst out, ‘What the fuck is this about?’ A friend who saw the film on another day said that almost half the cinema-goers left during this section.

So, as a conclusion? It’s a very interesting film, full of beautiful cinematography and with some interesting exploration of faith, personality and emotion. But it is flawed by its ambition. I’m sure I’ve missed some things – and perhaps I’ve misunderstood or misinterpreted something. Perhaps you think the dinosaurs were a vital part of the film? If so, tell me – I want to know your thoughts and ideas. 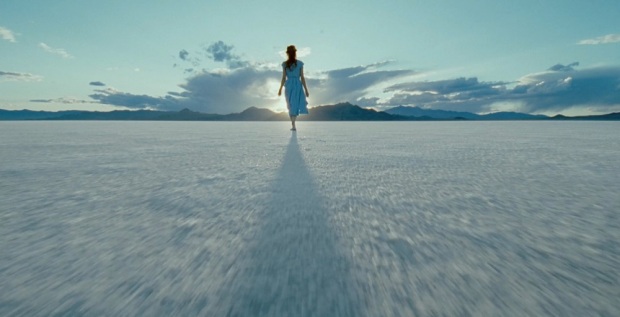