I wanted so badly to enjoy this play, which I booked after seeing Rosencrantz and Guildenstern at the same venue. It was the final treat of my summer holiday.  I looked forward to seeing another production directed by Trevor Nunn; and I couldn’t wait to see Ralph Fiennes on stage again.  When I saw him in Oedipus, at the National Theatre in 2008, his performance was raw, haunting, and stayed with me for days.  I was sure that The Tempest would be a tour de force; but I’m sorry to say it fell short of expectations.

I will give Trevor Nunn and his team the benefit of the doubt.  The play only opened on 27 August and the press night isn’t until 6 September.  Perhaps there are teething problems; but, if I were in Trevor Nunn’s shoes, I’d want everything to be perfect from the word go.  His cast may not have to face the press yet, but they do have to face an audience which has paid full whack for its seats and is perfectly capable of going home and writing a blog entry.  (It’s not just me.  I think this person was also there last night.  However, a first-night reviewer had nicer things to say.)

I’ll begin with the positives, because the cast and crew have been labouring for months and the least I can do is acknowledge their commitment.  There were two performances that really stood out for me.  Elisabeth Hopper, as Miranda, delivered her lines as fluidly and easily as if they were in modern English, and her whole performance was similarly convincing.  Her Miranda was full of bubbling enthusiasm and coltish grace, ravished by the discovery of the outside world.  Nicholas Lyndhurst, as Trinculo, was a long-suffering and lovable clown, madcap and morose by turns.  His long face was made even longer by straggling blond hair, and shabby pink pantaloons flapped around his skinny legs.  He only had to come on stage and people laughed.

The negatives, I’m afraid, are more numerous.  First, it was sometimes hard to hear what the actors were saying, partly because some of them had adopted accents, and partly because they weren’t projecting their voices enough.  My friend and I were in the second row of the gallery, but I’ve been in the same spot for two other plays, and I heard every word of those.  Last night, neither of us understood a single sentence of the opening shipwreck scene, which was simply a tumult of noise, shouting and running around.  Secondly, the quality of the special effects was inconsistent.  They ranged between the impressive (the vanishing banquet table) and the basic (actors dangling from wires and being winched across the stage).  The two reviewers to whom I’ve linked, above, found the wires more distracting than I did.  I didn’t mind them too much.

What I did mind – thirdly – was the sporadic interruption of the action by songs or, on a couple of occasions, dances.  In the second act, we were presented with a full-on magical pageant in which Iris, Ceres and Juno descend to bless Miranda and Ferdinand’s marriage, in three songs, followed by a country dance between shepherds and nymphs.  At this point I decided the only explanation was that Trevor Nunn was trying to conjure up the sensation of a Jacobean masque.  However, it just didn’t work: instead, this scene was a little embarrassing.  The play would have been no worse without it and, in my humble opinion, might even have been better.

As for the actors, Michael Benz’s Ferdinand was engaging enough, but was a little too staged and self-conscious in his delivery; he needs to relax into the role.  I liked the interplay between Antonio and Sebastian, whose mockery of Gonzalo flowed very naturally and added a much needed light note to the long scenes of people trudging about the island.  Tom Byam Shaw was a lithe and graceful Ariel, but instead of being otherworldly, I simply found him rather fey – in the wrong sense. He isn’t terribly well-served by the production, which requires him to run around a lot in pools of blue light, and to perform two songs. Both are obviously meant to be ethereal but to my ears they sounded rather out-of-tune. His attendant sprites were left without much to do, except to flutter around the stage now and then, like a group of very earnest children in a school ballet performance. 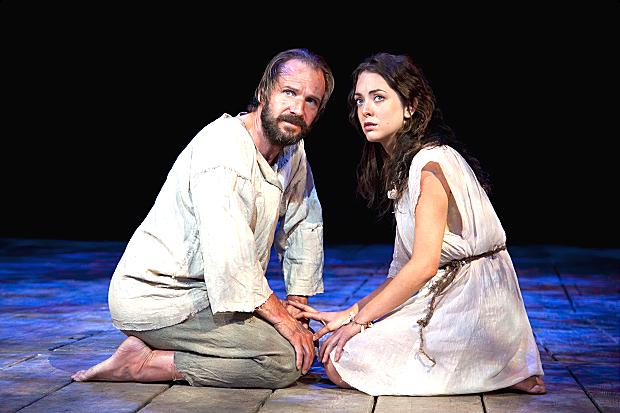 The handling of the magical elements just didn’t gel, probably because they seemed camp and awkward when set against the more sober, traditional acting of the ‘human’ roles.  Caliban, whom I always imagined as simply a monster, was here a rather sympathetic character: tricked by Prospero; deprived of his birthright; enslaved and hated.  The fact that Giles Terera is the only black man in the cast is probably entirely coincidental, but it does mean that certain lines can be read in new or more complex ways.  This troubled me slightly, but then I became troubled by the fact that I was troubled, and thought I was perhaps making too much of it.  Ultimately, the point is in how good the casting is, and Giles Terera manages to powerfully convey Caliban’s pathos and desperation.

That leaves me with Ralph Fiennes.  I was ready to be dazzled, but I found his performance to be rather indifferent.  His Prospero had no passion, little humanity, and no connection with the audience.  I’ve recently seen two other well-known actors in Shakespearean stage roles: Kevin Spacey as Richard III at the Old Vic and David Tennant as Benedick in Much Ado at the Garrick.  Both of them engaged the audience and made us care about the characters.  Ralph Fiennes simply stalked about the stage, slightly hunched (to the point where I wondered whether he had backache), and his delivery was so level that it veered dangerously close to being bland.  I expected him to be brilliant; and he was not.

To be fair, the first-night reviewer (linked above) disagrees wholeheartedly with me and thinks that in this performance we see one of the age’s great Shakespearean actors.  All I can say is that, for me, Ralph Fiennes was an actor standing on a stage, reciting Prospero’s lines.  He was not, for those two hours, Prospero himself.  As I failed to engage with him, I felt that there was a void at the heart of the production; and the play passed in front of me, a series of tableaux, stylised scenes and set-pieces, but left very little impact on me afterwards. It will be interesting to see the press reviews when those come out.  My philosophical friend said that it can be valuable to see a play that isn’t perfect, because it encourages us to think how we might have done it better; whereas, in perfection, there is no room for improvement.