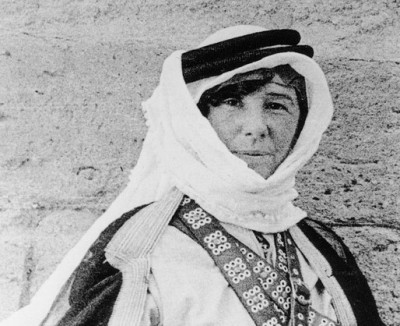 When planning my trip to Qatar, it was hard to decide on reading material.  If I go abroad I always try to find a book which matches the place I’m going, as far as possible: it’s like a game.  I’ve read The Three Musketeers in Paris and The Leopard beside the pool in Sorrento (Sicily itself is still on the ‘to-do’ list).  For the Middle East, the obvious book was Seven Pillars of Wisdom, which is one of the many books I’ve always meant to read. I bought it; but then began to worry that perhaps it might cause offence; I don’t know how T.E. Lawrence is perceived in the Middle East.

Instead I trotted off to Hatchard’s, where I came across this little gem. The Valleys of the Assassins is a tale of adventure, archaeology and sheer bloody-minded gumption. Freya Stark moved to Baghdad in her late thirties, learned Arabic and began exploring modern-day Iran and Iraq during the late 1920s and 1930s, making maps and searching for archaeological finds – and bona fide buried treasure.  This book contains five short pieces detailing her various adventures.  Since it dealt with Persia and not Arabia, I thought it couldn’t possibly cause offence.  And I loved the cover.

I loved the book even more. Stark has earned my undying admiration for her cheerful attitude to her expeditions.  She rides into the wilderness accompanied only by a variety of semi-trustworthy retainers, such as the roguish Keram or the rather aloof Shah Riza.  She writes beautifully about the landscapes through which she passes, and although she doesn’t go into great detail about the people she meets, her choice of vignettes creates vivid colour.  Her tongue is always at least partly in her cheek: there’s a lot of wry humour in the books, largely born from her guides’ and hosts’ bafflement at how to treat an independent and well-connected woman.

Although she does have a great deal of humanity, Stark does seem rather detached from the emotional intensities of her adventures.  If you believe her calm, composed writing, then she drifted through everything fairly easily and it was all well in the end.  Her interactions with the police, the tribesmen and her guides are set down in a matter-of-fact way, although on her travels she seems to have faced a good number of set-backs, dangers and complications.  And yet she just pressed on.

One thing of which I can’t quite approve, however, is her reason for being in these remote places.  She was an archaeologist, fair enough, but there are points when her motives don’t sound awfully different from grave robbing (she buys bronzes from tribesmen who have unearthed them to sell, and she takes a skull from a grave in Luristan).  Admittedly she gave the skull to the museum in Baghdad, and she was interested in recording the placement and features of the graves she found.  Probably someone would have come to rob the graves anyway, and by taking the items to safety in a museum, Stark was helping to safeguard the artefacts.  But how far is that true?  Part of me – the serious, scholarly half – bemoans the fact that the context of these burials has been lost and can never be recovered. Mind you, there’s another part of me that thinks Stark’s buccaneering is actually rather wonderful…  To just go out there, into a world of herdsmen, nomads and quarrelling chieftains; to charm them into helping to look for treasure or for secret ways into forbidden regions; to understand not only the languages but the customs and culture, and to win respect from a male-centred society… What a character she must have been!

This book isn’t necessarily very illuminating about the history of the region, but it is excellent at creating atmosphere.  I wish there were more maps – most of the time I’ve no idea where Stark actually is in the region.  (Part of her purpose was map-making: she supplied maps to the Royal Geographical Society.)  But her stories are intoxicating; I only wish that the world she describes still existed, so that I might see it for myself.  I see that other books of hers are in print, so no doubt I’ll be back at Hatchard’s very soon.  Until now, I’ve never been much of a fan of travel writing (my attitude: ‘I’d much rather see it for myself, thank you’) – but a few minutes of reading this book left me wanting to saddle up my mule, gather my saddlebags and ride off into the Persian mountains with Stark on the trails of ancient bandits, bronzes and secret societies.  Delicious stuff.