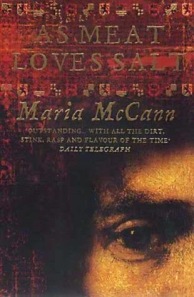 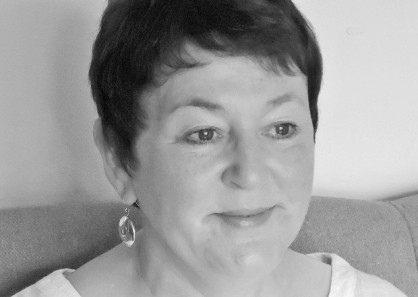 A new edition of As Meat Loves Salt has just been published in paperback.  The cover, aimed at the burgeoning understated-historical-romance market, shows a close-up of a woman’s torso, her hands in her lap. This amuses me, because although there are certainly women in the book, this cover completely fails to convey any of the story’s spirit or major themes. It would be like putting a fin-de-siècle lady with a parasol on the cover of Death in Venice. I much prefer the cover of my edition, which I’ve used to illustrate this post. Here is darkness, brooding, and a fragment of a young man’s face looming out of the shadow.

Sometimes when I read a novel it  lingers, colouring my mood even after I’ve finished the last page. This was one such book. Maria McCann’s writing is assured and pitch-perfect. Her first-person narrative and turns of phrase have an authentic seventeenth-century feel to them, and her main character Jacob is a magnificent creation.  He’s unreliable and emotionally immature, but his voice is always convincing.  Driven by insecurity and half-remembered memories, many of which we never fully get to understand, he pulses with rage, desire and barely-controlled inner savagery.  I can only imagine what McCann must have felt like after spending days inside Jacob’s head.

Set against the backdrop of the English Civil War, the story follows Jacob Cullen from his simple life of domestic service, through his time as a soldier in the New Model Army. Passionate and unpredictable, Jacob already has blood on his hands and seeks to efface himself in something completely different. He’s ready to be shown a new path, and that eventually comes courtesy of his fellow soldier Christopher Ferris, who in peacetime is a radical printer in London. He offers Jacob lodgings after the war, and under Ferris’s gentle encouragement Jacob begins to feel increasing sympathy with the extreme religious sects springing up in this divided land. But, as their friendship deepens and emotions become more complex, Jacob finds it increasingly difficult to maintain the tranquillity of his new life. Troubled by his past crimes and always inclined to act first and consider later, he’s a dangerous man on a shortening fuse. What begins as a fervent, obsessive love warps into something darker and all-consuming, and Jacob slowly begins to realise that he can’t outrun his demons if he carries them within.

McCann excels at evoking the claustrophobic, highly-charged awkwardness of desire. I haven’t seen angst so feverishly portrayed since I read fan-fiction as a teenager. But here it’s handled beautifully and feels genuine, heightened by the instability of the political system which is crumbling away around the characters.  You long for Jacob to find some peace, even as you watch him unwittingly driving away what chance of happiness he has.

If you like historical fiction, and enjoy books you can really get your teeth into, then this is one for you – with or without the salt. Seek it out wherever you may find it. It was obviously written under a rare conjunction of the planets, because it has a magic that McCann’s second novel, The Wilding, was unable to repeat.