I’ve already mentioned this exhibition in the context of the wonderful portraits of Pierre Gonnord, who is one of the photographers who’s donated his work to be sold in aid of Venice in Peril.  When I wrote about Pierre Gonnord, I hadn’t actually been to see the show and had fallen in love with his photographs via the rather less imposing medium of the internet.  However, last Saturday, after visiting the Leonardo exhibition and then managing to get caught up in the Lord Mayor’s Show (which was great!), I finally made it to Somerset House.

Fourteen photographers have donated several works each to the exhibition.  As I’ve already admired Pierre Gonnord at some length, I see no point in repeating myself here, except to say that his works struck me as both more and less impressive in the ‘flesh’.  More impressive because of the sheer scale – each more than five feet tall – but less impressive because somehow that scale diminished the painterly effect and made the sitters less vulnerably human.  I want to focus here on the two other photographers who impressed me most, and also to note one other photograph which struck me.  The first was Nan Goldin, whom I’ve only come across at Tate Modern, as a photographer of transvestite subculture. I don’t know her work at all well.  It was a surprise to find this very simple but rather moving portrait of a boy.  Titled Leonardo with his Grandfather, Palazzo Papadopoli, it shows a young Venetian boy in his family’s ancestral home, dressed in modern clothes but still choosing – or being forced to – continue the traditions and values of his history. 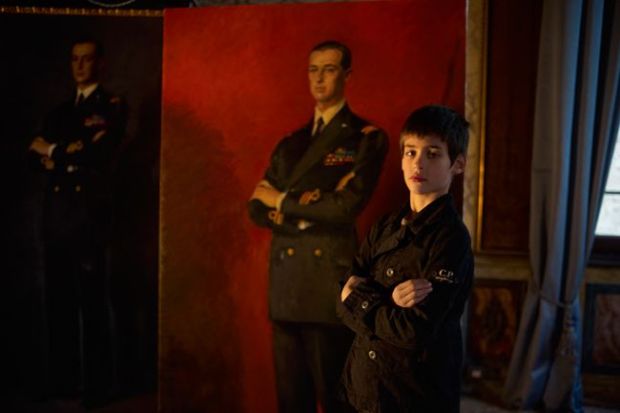 At the moment I’m obviously going through an austere phase, because I found myself drawn to two series of very simple photographs in black and white.  The first set were by Hiroshi Watanabe, whom I mentioned in passing in my Pierre Gonnord post.  According to the gallery guide, Watanabe wanted to delve deeper into Venetian psychology and to explore the way in which permanent residents of Venice react to the hordes of tourists, who are destroying the atmosphere of their city but at the same time are the only means of preserving it.  He chose to show the Venetians donning the guises of various characters from the commedia dell’arte, the masks both disguising their wearers and hinting at deeper attitudes towards their city.

While I can appreciate the philosophy behind the series, I liked it because it was theatrical and elegant, beautiful, but with an undercurrent of darkness – which, for me, is the essence of Venice.  Below are a sample of photographs from Watanabe’s series, The Comedy of Double Meaning.  These were all on view at the exhibition – but to see the other fabulous works in the series, and to find out about Watanabe’s other works (including photographs of kabuki actors, and a photographic exploration of the Isola di S. Michele), go to his excellent website. 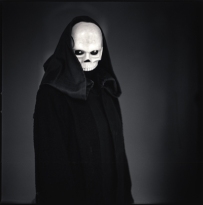 The other series that particularly caught my eye was a set of photographs by Matthias Schaller.  His concept is very simple.  He’s just taken photographs of parts of Venetian mirrors, whose elaborate frames testify to the city’s taste for ornament, and whose faded, scratched glasses, dimmed by patina, reflect (often literally) the city’s corresponding gentle decay. Schaller has given his photographs names alluding to famous Venetians.  I assume that one named Giacomo C corresponds to Casanova, and that another named Tullio L refers to Tullio Lombardo, but I’m having trouble with the others…

For those who prefer more colour, there are more vibrant and light-hearted visions of Venice.  Robert Walker presents a series of photos of tacky merchandise stalls, arguing that sexual jokes and aprons of Michelangelo’s David are just as valid a part of the Venetian experience as masks and gondolas and elegant decline.  Antonio Girbes presents amazing kaleidoscopic visions of Venetian architecture in which the Ca’ d’Oro and other palaces spiral out from central points in a dizzying swirl of architecture and Gothic windows.  Candida Hofer contributes spectacular photographs of the interior of La Fenice, whose palette of rose, golds, whites and pinks injects a touch of old-fashioned Venetian frivolity.  Whatever your taste, there’s bound to be something that fits.  And I urge you to go along, because although it’s quite a small exhibition, you will be supporting a very good cause. 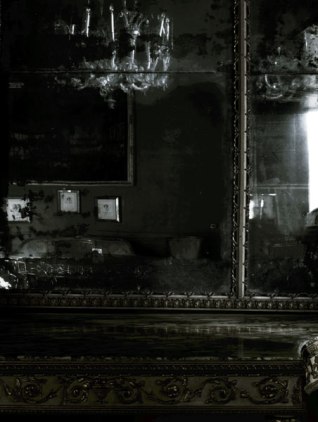 One thought on “Real Venice”