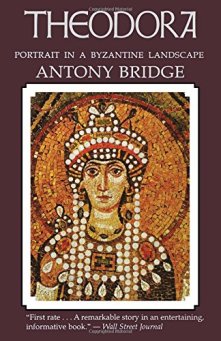 While still at school, I somehow acquired a copy of the Folio edition of Procopius’ Secret History, which I’m ashamed to say I never read and always regarded with slight suspicion. Since I didn’t encounter Byzantine history until one particularly complex and unsuccessful week in Hilary Term of my first year at university, I’ve no idea what possessed me to buy it.  Did I think it was some unusual edition of Donna Tartt’s excellent novel (one of my favourites)?  At any rate, poor Procopius lingered unloved and unread on my bookshelf until, at some point in the last ten years, he was obviously consigned to the charity shop.  It’s typical that, as soon as I yearn to plunge into his small-minded and salacious history, it turns out that I gave it away.  After reading this book, I definitely want to go back to it.

Antony Bridge explains in his foreword that he wanted to write an introduction to the Byzantine world for the general reader, whom he feared might be intimidated by the complexity of most Byzantine history books. He succeeds admirably. By focusing on Theodora, probably the most intriguing and best-known figure of the period, he manages to keep his book tightly focused, while also using her experience as a way into the wider issues of the period: the theological debates between Monophysites and the Orthodox, for example, or the wars with the Goths in Italy.  I was particularly impressed, I have to say, with Bridge’s talent for explaining the religious issues, which have simply confused me before.  As I was preparing this post, I discovered why he tackled theological arguments with such aplomb: he was the Dean of Guildford Cathedral (and sadly died in 2007).

Fundamentally this is a highly readable and enjoyable book for the newcomer to Byzantine history, which introduces some of the key players and issues. I wish I’d had it to hand before writing my first-year essay!  (For those with some prior knowledge, though, it might skim the surface a little too much.) I have to admire Bridge for the task he took on in writing this, because his job was even more difficult than that of most historians. He chose to write a biography of someone about whom very few facts are known, and as such, the reader should beware that imagination and intelligent deduction are probably as active here as ‘hard fact’, if hard facts are ever possible.

Indeed, Bridge comes across as slightly more partisan than one would like in a historian. In some ways, this is great because it means we have a point of view which is much more balanced and favourable than Procopius’ famous account. But Bridge finds it difficult to accept that Theodora had a truly dark side; and he also seems to want to interpret her in a way that’s as favourable as possible to modern thinking. I find it difficult to hold this against him too much: his evident affection for and interest in his subject spills onto the page and can be infectious. Theodora is presented as an intelligent, feisty, capable and fascinating woman, and her world is brought to colourful, pulsing life. I now feel ready to jump into the deeper waters of John Julius Norwich’s Byzantium: The Early Centuries…