First screened in 2008, this four-part TV series shows us the English Civil War through the eyes of a woman. Subtitled, in a teasing nod to the Newgate scandal-sheets, A True Account of the Life and Times of Angelica Fanshawe, it begins in the early 1640s.  Angelica (Andrea Riseborough) is goddaughter to Charles I, blessed with wealth, position and security: the first episode opens on the eve of war, with her wedding to her cousin Harry, her childhood sweetheart.  As hostilities between King and Parliament deepen, her married life comes to an abrupt close and, banished from the court, Angelica finds herself in growing sympathy with those who seek to make a better world.  The series follows her as she struggles to defend her own well-being and her family home, as the sands of political fortune shift under her feet.

What I love about this series is that it isn’t just about battles and high politics. The writers place significant emphasis on the religious changes at the time, particularly the Leveller and Digger movements, with their central tenets of liberty and equality for all men. By taking this angle, they bring the drama out of the court and into the streets: certainly, we spend time with Oliver Cromwell (an excellent Dominic West), but we also see the power of the demagogues, such as John Lilburne (Tom Goodman-Hill). Perhaps the only character in the series with unshakeable principles, and consequently one of those I found least likeable, Lilburne is feted by Parliament while his rhetoric suits their cause, but it’s a different story when his merciless criticism of power is directed at them. The heart of Lilburne’s story is his long-suffering wife Elizabeth (Maxine Peake), who keeps faith with her husband and tries to drum up support for him, even as he drags her down to poverty.  The women, it’s suggested, are the ones who try to keep the world turning while the men bring it down about their ears.

I always enjoy characters who, as I said in my post on Bring up the Bodies, live in shades of grey. Here there is grey in abundance. No one is genuinely good and yet no one is unsympathetic. Angelica, with her visions of the devil and blood on her hands, is a strong and intelligent character, conscious that she must play on her beauty in order to survive.  Oliver Cromwell starts out with a genuine desire to improve the world he sees around him, although power proves more addictive than he had expected. The revelation, though, is John Simm as Edward Sexby, the grim, world-weary mercenary who comes back from the Continent to bathe his sword in the blood of his own people. Captivated by Angelica and fully conscious he can never have her, Sexby devotes himself to protecting her, as far as he is able, from the perils of a world in transition.

Madam, we enter the world alone and in blood, and we leave the same way. What happens in-between means little.

Production values can so often make or break a film, and despite the limited budget they must have had on this TV series, it never feels cheap.  Despite the silks, ribbons and curling irons in evidence in the first episode, most of the costumes are wonderfully grubby and down-to-earth: worn cloth, creased and stained leather, buff-coats supple from long use, and muted, natural dyes.  The cast has its fair share of starry names, but the actors generally keep the tone subtle and understated; the whole thing is an ideal ensemble piece.  As well as Riseborough, Simm and West in the main three roles, we have Michael Fassbender (once again looking completely different) as the principled Parliamentarian colonel Thomas Rainsborough, Tim McInnery (who will always, for me, carry shades of Captain Darling) as Angelica’s nemesis Joliffe, Peter Capaldi as Charles I and a brief but flamboyant appearance by Harry Lloyd as Prince Rupert.

As you might expect from the title, bodices are sometimes shed, but that doesn’t stop this from being one of the more intelligent and unusual historical dramas in recent years.  The dialogue is particularly well-written.  The critical reception wasn’t universally positive, with one Fellow of Peterhouse, Cambridge, dismissing it as ‘a cartoon-strip version of the Civil War’, but I think that comment is unjust.  TV dramas need to keep the non-specialists engaged while doing as much as possible to satisfy the specialists and, although history has undeniably been tweaked and condensed (Angelica herself is an invention), I have to say that in my opinion this strikes an extremely good balance.  Sold in the US as The Devil’s Mistress, it is well worth a few hours of anyone’s time. 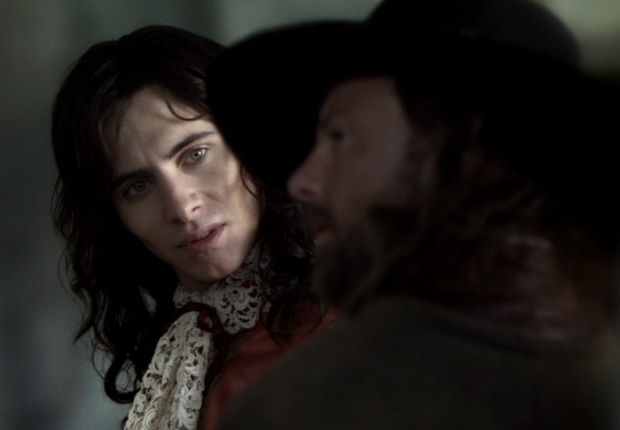 2 thoughts on “The Devil’s Whore”