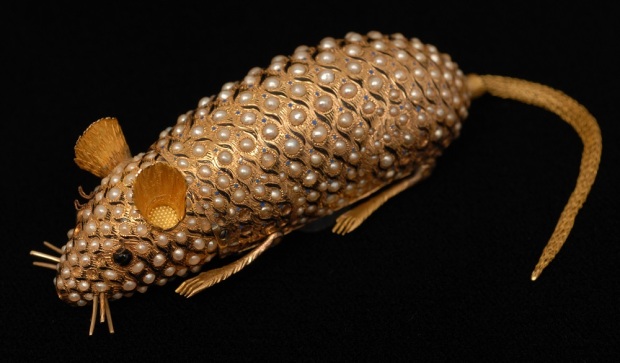 Publicity for this exhibition has been rather limited – I only found out about it because I spotted a poster while going up a Tube escalator one day – which is a shame, because it really is something not to be missed. It’s an unprecedented show of almost 500 gold objects, the vast majority of which were made in Britain, showing the versatility and skill of the goldsmith’s craft over the last 4,500 years.

As if the glittering sweep of exhibits wasn’t dazzling enough, the show takes place in Goldsmiths’ Hall, which is otherwise only rarely open to the public. As so often in London, the facade gives little indication of the sheer splendour beyond. An elegant Palladian frontage leads into the Staircase Hall, whose walls are inset with at least three different kinds of marble and whose elaborate ceiling left me stunned; but that was nothing compared to the splendid Livery Hall on the piano nobile, which is about twice the size of my entire flat and boasts a coffered, carved, painted and gilded ceiling and an enormous chandelier. To get an impression of the interior, you can take a 360° virtual tour on the Goldsmiths’ Hall website.

The earliest items on show were from the third millennium BC: delicate Bronze Age neckpieces called lunulae, which are beaten out of thin sheet-gold. How they have survived the ages, goodness knows. From a slightly later period there were various types of torcs, from the simple twisted kind to the much more elaborate example from the Blair Drummond horde, which is made up of multiple twisted chains of gold and intricately-worked terminals. (This horde, which is worth about £1 million, was unearthed in 2009 by a chap called David Booth on his very first expedition with a metal detector. How lucky can you get?)

Moving forward in time, there were Anglo-Saxon brooches, inlaid with garnets and cloisonné work; a medieval jewel in the shape of a letter M, studded with precious stones, which belongs to New College, Oxford; and the Naseby Jewel, which Charles I supposedly wore on his hat at the eponymous battle. Frankly, there were so many beautiful things that I haven’t a hope of remembering them all: coins minted by Philip of Macedon, Constantine, Elizabeth I and Victoria; mourning rings, gilded picture frames and gold plate; and even an adorable mechanical mouse, purchased in 1871 by Josephine Bowes for her husband John (of Bowes Museum fame), because his pet name for her was ‘Puss’.

And then, in the Staircase Hall, you can see examples of contemporary goldsmiths’ work.  I was particularly struck by the Pleiades Necklace, designed especially for the exhibition by Wright and Teague: seven concentric rings of beaten sheet gold (I couldn’t help thinking it looked rather uncomfortable); and then there was a stunning nautilus cup, designed in 2008: the shell lit from within and glowing like alabaster, set on a golden stem which furled out at the top into a cradle of strands like seaweed.

For a temporary exhibition, it’s very professionally arranged: the ancient and medieval objects are displayed in niches in a darkened room, the cases lined with artfully crumpled silk. The only improvement I could suggest would be the addition of numbers in the display cases. As a layman, faced with a cluster of six torcs (for example), I found it difficult to judge which related to which label; and in many other cases it would just have made it that little bit easier to follow. But it’s a minor thing. There are plenty of information boards which explain the history of goldsmiths in Britain, the practice of assaying and the development of hallmarking (so called because smiths would bring their wares to Goldsmiths’ Hall to be approved and marked). To be honest, I think it’s difficult to take all this in as well as admiring all the objects on show, and I’m still not quite clear about the development of the various gold standards. I suppose I’ll just have to go back…

There is an exhibition catalogue but, while there seemed to be lots of good information in there about the Company’s history and activities, it didn’t seem to have entries on many of the exhibits. I dithered, but didn’t buy it in the end.

The Pleiades necklace by Wright and Teague