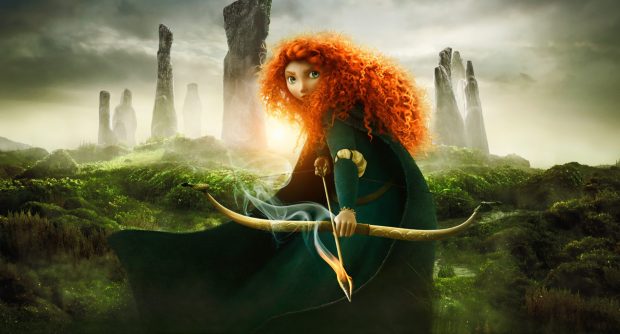 Despite all the serious musing on books around here, I’m really still a child at heart. I’d been looking forward to Brave since I saw the first teaser posters about six months ago: the animation looked superb. During the last few months, it rapidly became clear from the enthusiastic reaction in the States that this was a different kettle of fish altogether from its Pixar/Disney predecessors.

Brave is the first Pixar film with a female director, and Chapman also wrote the story. She provides a welcome focus on girls and women as the key characters, and emphasises the importance of the mother-daughter relationship. Previous Pixar films have focused very strongly on male characters – whether it’s fathers and sons (Finding Nemo or the wonderful Up, centred on a substitute father-son relationship), or buddy movies (Monsters Inc. or Toy Story). And, although Merida is already being co-opted into the band of ‘Disney Princesses’, Chapman undermines the essence of the stereotypical Disney heroine. Even in recent, more progressive films like The Princess and the Frog or Tangled, where the heroine has a bit more gumption than usual, everything wraps up with a wedding. The heroine’s victory over adversity is never complete without her finding Mr Right. It’s immensely refreshing that Merida isn’t having any of that, thank you very much.

The film is set in medieval Scotland and features some truly extraordinary digital landscapes, as the camera sweeps over glens and hills that look almost real. Merida (Kelly Macdonald) is the energetic, self-assured daughter of King Fergus (Billy Connolly) and Queen Elinor (Emma Thompson), and elder sister to a band of anarchic triplet boys. She has grown up riding her horse Angus through the Highlands and training herself to be a proficient archer, despite her mother’s long-suffering attempts to instill qualities more suitable for a princess: patience, gentleness, politeness, elegance. When Merida reaches her late teens, Elinor announces that the chiefs of the three main clans are coming to the castle to take part in the Highland Games and to present suitors for Merida’s hand. Merida resists; Elinor insists; but, when Merida’s suitors are invited to compete for her hand, she develops a plan to free herself from her obligations.

After a heated confrontation with Elinor, she storms into the forest, following a trail of will-o’-the-wisps to the cottage of an elderly wood carver. Discovering that the old woman is a witch, Merida barters for a spell to change her mother so that she’ll no longer insist upon a marriage – but leaves the nature of the desired change perilously vague. Of course, things don’t go to plan, and then it’s down to Merida to return things to their proper order. The men are deliciously unhelpful in all of this: as Merida and her mother fight to break the spell, King Fergus and the clan chiefs are preoccupied with drinking, eating, squabbling and telling stories about how Fergus lost his leg to the evil demon-bear Mor’du. (That proves important, because as a consequence Fergus has a passionate hatred for bears and is determined to add Mor’du’s head to his collection of hunting trophies.)

With the unleashing of Merida’s curse, the film settles into a more conventional breaking-the-spell-in-time storyline. Along the way Merida and her mother begin to understand and respect each other, and to grow closer through their shared sense of purpose. It isn’t subtle, but then again it isn’t meant to be: this is a children’s film, after all. Mind you, you’d have been forgiven for thinking otherwise if you’d seen it in the same cinema that I did. There were two family parties in the auditorium, but everyone else was an adult unaccompanied by any children. And yet everyone seemed willing to shrug off their cynicism and to fall in love with the film; there was plenty of laughter at all the right moments, which created the perfect ambiance.

The score was written by the Scottish Patrick Doyle, who is already a favourite of mine for his splendid music for Kenneth Branagh’s Much Ado About Nothing and Henry V. His Brave score was full of glorious music and, when I swept out of the cinema at the end, I was torn between wanting to grab a bow and arrow and wanting to dance a Scottish jig. There were a couple of songs, but these were used as background music rather than being sung by the characters, as usually happens (and I think the film was better for it). And I have to mention the animation again. I’ve already said that the landscapes were superb, but so much has progressed. In one scene, Merida leans from a castle window while it’s raining and the rendering of water running down the stone walls was incredibly convincing. Again, the animation of her horse Angus was fantastic both in texture and movement. Merida herself, of course, has a stunning mop of red curly hair, which I imagine must have provided one of the main technical challenges for the digital artists. The very fact they chose to give her hair like that shows the degree of confidence they have in their abilities, as much as it shows her free-spirited and untamed character.

This was engaging and such fun – and the perfect corrective to other Disney films, which suggest that happy endings are all about wearing an impractical ball-gown, sacrificing your legs / freedom to prove your worth, and ending up with a castle and a handsome prince. Brave argues that girls can be wild and free (and good with weapons) and should have the freedom to choose their own destinies – hear hear to that.

Just to finish, I also wanted to mention La Luna, the short film which preceded the main feature. Written and directed by Enrico Casarosa, this is a heart-warming little piece of whimsy and one of the best Pixar shorts I’ve seen.

Merida with her family: the triplets Harris, Hubert and Hamish, her father Fergus and her mother Elinor © Disney/Pixar