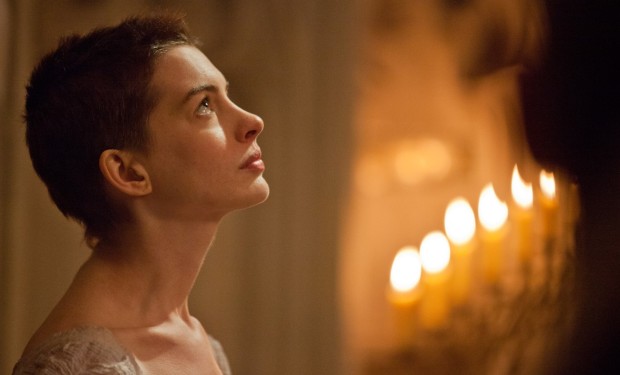 I first encountered Les Misérables in choir lessons at school, when we learned some of the songs, and I read the book when I was about fourteen, after my father, knowing how to handle me, said something like, ‘You’ll never get through that’. Now I can’t remember anything of the novel except (spoiler!) the scene of Enjolras’s death, which affected me deeply; but the musical has a secure place in my heart. I’ve seen it several times and I have the soundtrack on CD, so it’s fair to say that I know the score rather well. I was curious to see how it would translate to film (it’s important to stress that this is a film of the musical, not the original book), and overall it’s a success, even if it’s not quite as brilliant as all the hyperbolic reviews had led me to believe.

The film springs into life with the first striking notes of the chain-gang song Look Down, as the camera soars up from underneath the hull of a galleon being hauled into dry-dock by the convicts. This stunning statement of directorial intent takes your breath away, although it isn’t really matched for visual grandeur by anything else in the film, with the possible exception of the finale. The rest is on an intimate scale, shot in a palette of browns and greys, with many of the scenes taking place at night or in the rain. The story is told most effectively through almost intrusive close-ups which emphasise the characters’ moral dilemmas and emotions and which lay bare every line and wrinkle. This visual austerity is reflected by the decision to have the actors singing live on set rather than miming to prerecorded tracks: it was a brave move by Hooper and it does mean that some of the depth and richness of the sound is lost, but on the other hand it forces the audience to confront the raw pain of many of the songs. 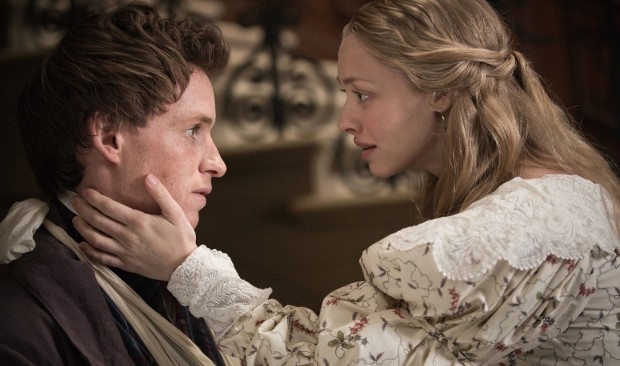 Although I don’t like to jump on bandwagons, it’s true that Anne Hathaway’s performance of I Dreamed A Dream is the best of the film, by a mile. The camera haunts her gaunt, ravaged face as she confronts the destruction of her romantic ideals, moving from despair to bitterness and then to empty resignation. The stripped-back sound, coupled with the naked agony of her expression, makes it almost unbearably wrenching to watch. I should add that I’ve never really had much time for Fantine before: when I saw the show on stage, she struck me as a bit wet and I never bought in to the phenomenal recent popularity of I Dreamed A Dream. Anne Hathaway has managed the remarkable feat of taking a character I didn’t really care about and turning her into one of the most powerful and memorable figures in the film.

The other one who really impressed me was Hugh Jackman as Jean Valjean, although he had extremely large shoes to fill: Colm Wilkinson, who took the role in the original 1985 production (and who makes a cameo in the film as the kindly Bishop), had a remarkable voice and incredible range and, although Jackman is very good, he struggled a bit on some of the high notes in Bring Him Home, which must be a devil to sing. However, he was superb in Valjean’s Soliloquy as he agonised over whether to stick to the criminal role that society had cast him in, or whether to trust in the bishop’s assertion that he, like any other man, had a soul worth saving. At the risk of sounding a bit too much like an old luvvie, he wasn’t just singing the song, he was living it.

Like Hathaway, Jackman managed to convey the torturous flood of his emotions and it turned the song into a moment with a lot of punch. Oddly enough I didn’t feel that he made quite such a good job of Who Am I?, a song which is a rousing assertion of identity and which marks the moment where Valjean becomes a truly good man, in refusing to let another suffer for his broken parole. I think I wanted it to be more stirring than it was: Hooper decided to play it as a more introspective piece and I missed the fire and drama of the stage show. One final stand-out performance, for me, was Samantha Barks as Éponine, who did a beautiful job of On My Own, making it both streetwise and hopelessly romantic. 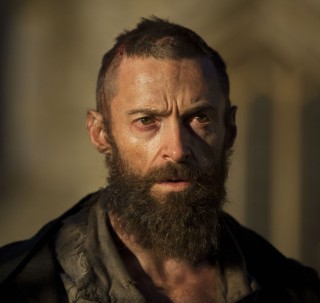 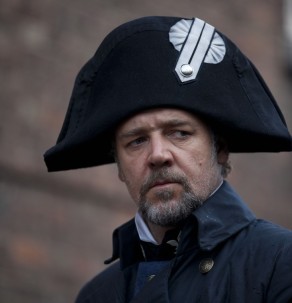 There were some less successful angles. To criticise Russell Crowe’s performance as Javert feels slightly like shooting fish in a barrel, but it has to be done. He made a very good effort and was a better singer than I’d expected, but the simple fact is that he was miscast. Javert needs to have a much stronger voice: he is the musical counterpart to Valjean and their confrontation beside Fantine’s deathbed should be a duel of voices as much as of weapons. Crowe managed to convey the character’s loyal doggedness and sternness, but failed to get across the passion of the man. Javert is more than just a looming shadow in Valjean’s life: the two men are like two sides of the same coin, shadows of each other, and they are bound together because neither of them will break his oaths and principles. Even their songs reflect each other: Javert’s meditation before his suicide follows the same music as Valjean’s Soliloquy. To be fair, Crowe has a hard act to follow: the Javert on my recording is Philip Quast, whose vocal performance is excellent. But, even in Javert’s Suicide, Crowe seemed to be concentrating so hard on his singing that he forgot to give the character the necessary depths of emotion: this is a man who’s about to throw himself to his death in the Seine, after all, not someone who’s musing on a frustrating crossword problem.

In passing, I’ll add that Cosette and Marius are never wholly successful characters for me because I feel that they’re a bit vapid, especially Cosette, who suffers from the fact that her role never develops beyond that of a child in need of protection. Another thing that struck me was the decision to change several incidental pieces of sung dialogue back into spoken dialogue: I found this odd and unnecessary, especially as Hooper was happy to go with the ‘sung-through’ approach (for example: when the police bring Valjean back to the bishop with his bag of stolen silver). Of course, I’m fully aware that the only people who’d notice this would be those, like me, who’ve listened to the original cast recording more than is good for them. 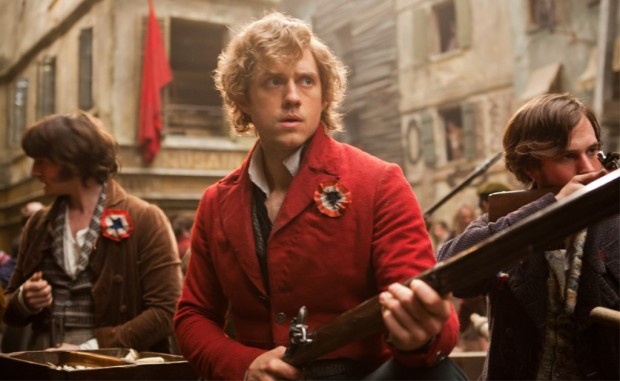 However, there were many, many things I liked. An interesting Christ-like imagery was used for Valjean, both when he hauled up the flagpost in the chain-gang and then later when he rescued the man trapped beneath the cart: bent under the weight of the wood on his shoulder, he reminded me of Christ carrying the Cross, and I’m sure that can’t have been accidental. Despite my issues with Russell Crowe’s performance, I think the film did well to emphasise that Javert has his own ethical system and that, if you looked at things from his perspective, you could understand his desire to uphold the law.

And then there were the students, Marius (Eddie Redmayne) among them. I felt that Marius actually had a stronger role to play in the film than in the stage show, acting as the right-hand man of the visionary Enjolras (Aaron Tveit). When I first saw the show, I developed a bit of a crush on Enjolras and even now he’s one of my favourite characters, but despite my partiality I thought Tveit pulled it off very well, managing to combine distant idealism with adolescent enthusiasm. I was struck by the fact that Hooper chose to use the book’s version of Enjolras’s death, rather than simply having him sprawled over the barricade as happens in the show, and I think that the moment when he and Grantaire were cut down by the soldiers was the moment I came closest to being misty-eyed. Just a quick aside on the subject of Grantaire: the rather good-looking George Blagden not only looked lovely in the part but also delivered a performance that I preferred to the recorded version I have, in which Grantaire has a distractingly gravelly voice. 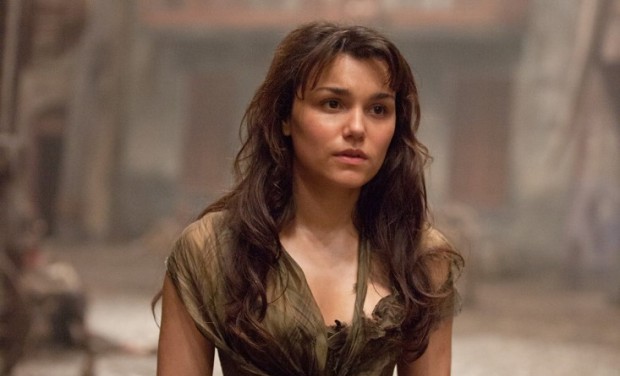 While having no complaints about the individual students, I was just left with a lingering feeling that there weren’t quite enough of them: Red and Black and Do You Hear the People Sing are such immense works in the stage show that they felt a bit thin here. And was I the only one who felt the barricade was a tiny bit small? I was expecting something grander and more powerful, like the far more impressive example that turned up in the finale. As it stands, the students’ barricade, for all its emotional impact, looked like the kind of thing that might have been created for a well-meaning but budget-strapped BBC adaptation, and I felt that a whole company of riflemen and four cannon was a bit of an overreaction on the part of the French police.

When I see adaptations of things I really love, I am very rarely thoroughly impressed and you must understand that, despite what I’ve said above, this is definitely worth seeing. As all the official reviews have lavished praise on the film, I didn’t feel that I needed to rave about it in order to encourage you to go and see it, and I feel more able to point out the things that I thought didn’t work quite as well, in the spirit of promoting discussion. But that shouldn’t hide the fact that I thoroughly enjoyed it and felt that Hooper had done an excellent job of making a musical into a serious film. To my surprise, however, I was never actually moved to tears, although this may have been a reaction to the woman next to me, who began sobbing during I Dreamed A Dream and didn’t shut up for the rest of the film. As the finale built up to a crescendo, with flags billowing in the sunlight and a rousing chorus of Do You Hear The People Sing, I was as caught up in the moment as anyone else in the cinema.

In a way, it’s good that the film isn’t the last word, because then there would be no point in going to the show again. For those who are happy to listen to the music without needing to watch the story, I thoroughly recommend the Complete Symphonic Recording, which is on the expensive side, but includes every piece of music from the musical and features a mixture of the three original international casts, along with superb sound quality. 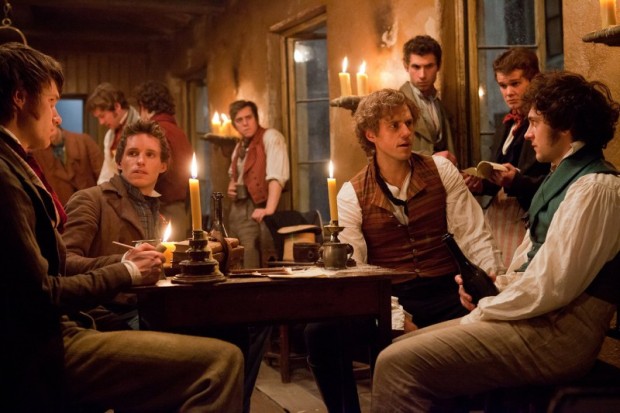 One thought on “Les Misérables”