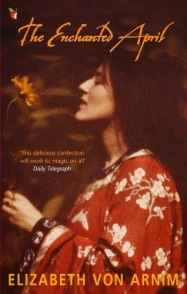 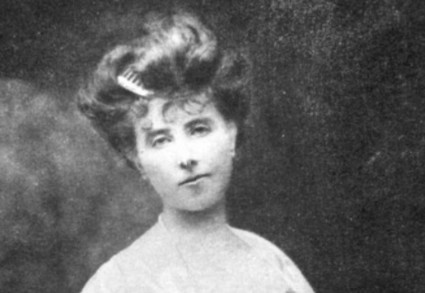 As London wallows in an almost Mediterranean heatwave, it seemed the perfect time to embark on this book, first published in 1922. It’s the first thing I’ve read by Elizabeth von Arnim, and it’s so established a modern classic that I really should have read it years ago. Despite its fame, I had no idea what to expect, but the novel captured me with its opening scenes in a wet, grey, almost monochrome London, and carried me off (genuinely enchanted) to its sun-kissed Italian shores.

The book opens with an advert in The Times. Modestly placed, it announces ‘To Those who Appreciate Wistaria and Sunshine‘ that an Italian castle will be available for rent during the month of April. For Lotty Wilkins and Rose Arbuthnot, two very different but equally unhappy women, this opens up a previously forbidden vista of potential self-indulgence. Brought together by their dream of getting away from it all, they decide to commit the shocking self-indulgence of having a holiday away from their husbands. To help defray the costs, they seek out two other women: the dour widow Mrs Fisher, who sustains herself with memories of the Great Victorians she knew as a child; and Lady Caroline Dester, a beautiful socialite who is bored of her family, bored of her friends, and simply wants to get as far away as possible and have some peace.

When the odd foursome convene in the charming seaside castle, it initially seems impossible that all these conflicting egos can settle into harmony. But they have reckoned without the transformative qualities of San Salvatore, where sun, beautiful scenery and good food combine. Each of the women, given time to think and burrow deep into her own heart, finds the magic of Italy beginning to work on her; and the stage is set for a heartwarming story of redemption, forgiveness and the simple human capacity for joy.

Von Arnim is a surprisingly shrewd and sparky writer – goodness knows why that should have surprised me, but it did – and I really enjoyed her characterisation. Each of the four women gathered at San Salvatore has an immediately identifiable personality and each of them is fully rounded, as individual in their sorrows as they are unique in their potential. It’s virtually impossible to avoid comparisons between this book and A Room with a View, which is my touchstone ‘transfigured by Italy’ novel. The resonances between the two may not be accidental: von Arnim and Forster knew one another well, and Forster was actually employed as tutor to von Arnim’s children for a time.

Yet there differences too. Von Arnim is a more humane writer than Forster: I don’t know whether that feeling stands up to prolonged scrutiny, but from what I remember, Forster’s humour often comes from making his characters look ridiculous. By contrast, von Arnim’s characters have something of the absurd about them, but that only serves as the crust beneath which we slowly come to know them as conflicted, simmering, believable human beings. She has a particular gift in suggesting the subtle social agonies of interwar London society, such as Lotty’s embarrassment at her husband’s pretensions to grandeur:

Wilkins she was and Wilkins she would remain; and though her husband encouraged her to give [her name] on all occasions as Mrs Mellersh-Wilkins she only did that when he was within earshot, for she thought Mellersh made Wilkins worse, emphasising it in the way Chatsworth on the gate-post of a villa emphasises the villa. When first… she had objected… he said, much displeased, ‘But I am not a villa,’ and looked at her as he looks who hopes, for perhaps the hundredth time, that he may not have married a fool.

Husbands, in fact, play a very significant role in the novel, even though they are primarily significant by their absence. Lotty and Rose both leave their husbands behind – one escaping the petty tyranny of the image-conscious professional; the other fleeing the indifference of an overly creative man who can’t understand her own devout Christian morality. Lady Caroline is yet to marry; and is, indeed, escaping from hordes of would-be husbands, while Mrs Fisher is a widow (and, we gather, quite relieved to be so).

These husbands, real or remembered or dreaded, represent all the weight of society’s expectations for women; and, by escaping from them, the four ladies at San Salvatore gradually have the chance to rediscover themselves, not as shadows bearing their husbands’ names, but as brilliantly individual people in their own right. Although it takes varying amounts of time, each of them finally finds the means to soften the hard carapace that has formed on their souls in the smoggy air of London, and to let the sunshine in. Mrs Fisher takes the longest, perhaps, but I was rather tickled by her increasingly irreverent meditations on her own departed husband:

Mrs Fisher had never cared for maccaroni… Always, too, when she ate it she was reminded of Mr Fisher. He had during their married life behaved very much like maccaroni. He had slipped, he had wriggled, he had made her feel undignified , and when at last she had got him safe, as she thought, there had invariably been little bits of him that still, as it were, hung out.

I’m thrilled that I’ve finally got around to reading this: it really is the perfect book for lethargic summer days, and it comes highly recommended to anyone else who hasn’t read it yet. I see that a film of the book was made in 1991, which has received generally adoring reviews on Amazon, so I may have to give that a go too. Surely it would be the perfect candidate for a double-bill with A Room with a View – or would that be simply too great an accumulation of divine Italian languor? Let me know your thoughts if you’ve seen it.

Of course, reading books like The Enchanted April does have a downside, namely that they leave me with an overpowering desire to be in Italy. It seems ungrateful to be dissatisfied with sun-baked London, but this book has left me wistfully dreaming of the warm, dusty scent of pine, crumbling honey-brown stone, olive groves, tumbling terraces and glittering blue seas…