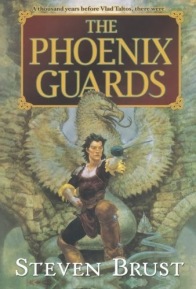 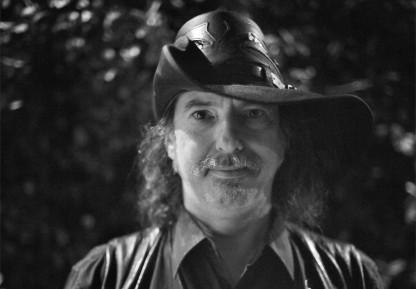 The Khaavren Romances: Book I

Young Khaavren is a gentleman, a Tiassa, who has neither land nor titles but who dreams of making a glorious name for himself in the service of the Empire. Heading to the city in order to join the Emperor’s elite force of Phoenix Guards, he falls into company with three similarly ambitious young people: a proud, belligerent Dzur named Tazendra; a discreet, contemplative Lyorn called Aerich; and an elegant, chivalrous Yendi called Pel. When these four are sworn into the Red Boot Battalion of the Phoenix Guard, they become firm friends, sworn to protect the good of the Empire and, more importantly, one another.

Even for naive, good-hearted young people, it isn’t an easy time to be in the city. The Imperial Court is rife with the machinations of favourites, and courtiers struggling to promote their own interests; the Emperor’s chief adviser is pulling strings to advance her own questionable ambitions; and the young Emperor himself is still unable to take the strong decisions needed to consolidate his reign. Love, danger and duels are to be found around every corner. And innocent young Khaavren is about to find himself pulled right into the eye of the storm; when, falling in love with a beautiful lady he chances to meet in a carriage, he swears to do all that he can to defend and support her. Little does he know that this will lead him, and his three loyal friends, into the midst of the Court’s most dangerous intrigues.

This might be starting to sound rather familiar; and, if it isn’t, I suggest that you replace the name ‘Khaavren’ with ‘d’Artagnan’ and things might start to fall into place. The Phoenix Guards is an affectionate pastiche of Dumas’s great adventure classic, written with tongue firmly in cheek by Steven Brust.

He was of medium height, but well built and athletic-looking. He wore neither jewelry nor hat – this last because it had been lost in a gust of wind two days before. To round off our description … we will say that he had a clear, friendly eye, an open countenance, and a frank, pleasant smile. With these things and a sword of good length, much can be done, as we will, by and by, endeavour to show.

I’ve never read anything by Brust before, but I very quickly warmed to his deadpan style of storytelling. His chapter headings alone were enough to make me smile: Chapter the Eleventh is subtitled: ‘In Which the Plot, Behaving in Much the Manner Of a Soup to which Corn Starch Has been Added, Begins, at Last, to Thicken‘. He writes two authors’ notes, one on the historian Paarfi who is the putative author of the book (written by Brust), and one on Brust himself (written by Paarfi). And he very wittily captures the exquisitely polite tone of Dumas’s original, in which our four doughty heroes are committed to nobility above all other things, always ready to defend their honour or to die gloriously in battle; and where duels are presaged by extensive professions of mutual admiration on both sides. If you aren’t familiar with the plot of The Three Musketeers then it’s still fun; and if you do know that story then, like me, you’ll spend a considerable part of the book trying to work out which of the characters should be identified with which of Dumas’s.

The Phoenix Guards was recommended by Heloise, who obviously knows me very well and judged that this would be right up my street. It was. I loved the duels, the high-minded values, and the tortuously courteous conversations which aim to leave no stone of courtliness unturned.

And yet there is one important caveat for those who, like me, are newcomers to Brust. This story is set in the fantasy world that he created for his phenomenally successful Vlad Taltos series; and consequently it takes for granted certain knowledge about that world which can be rather baffling if you haven’t read the other series (although Heloise has assured me that, even in Vlad Taltos, Brust never really explains anything and just throws people in at the deep end). Please don’t panic, though. There is a Wikipedia article on his world, Dragaera, which gives you enough background to understand the different Houses (Lyorn, Tiassa, Dzur etc.) and why the characters are supernaturally long-lived. That should give you enough information to read and enjoy this book, at least.

As I’ve said regarding so many other books, don’t let the fantasy element put you off. It’s slightly harder to ignore here than it was in Swordspoint, for example, but the emphasis is on good steel and honour rather than on sorcery and the supernatural. More generally, I liked finding myself in a fantasy world that was clearly so thoroughly worked-out. There were many references to things which were obviously important aspects of Brust’s culture but never really explained: the Orb, for example, which somehow protects and assists the Emperor’s reign; or the beliefs about the afterlife – or, more precisely, after-death. I must be completely frank here: I was aware of the Vlad Taltos novels and never had much desire to read them on the basis of the synopses I’ve read (they seemed to verge too much on the high-fantasy end of the spectrum, which I’m not overly keen on). Nevertheless, if The Phoenix Guards is characteristic of Brust’s wit and if the Vlad Taltos series is at least halfway similar to this, I think I’ve been doing it an injustice.

This won’t appeal to everyone, I fear. I think you need at least a small tolerance for fantasy; and an affection for duels, rapiers and cloak-and-dagger intrigue would help enormously. A knowledge of The Three Musketeers is advised but not obligatory: the story doesn’t follow Dumas slavishly, but there are enough nods and in-jokes that it definitely adds to the experience. If you do have these things, and if you are happy to curl up on a winter’s evening with a spirited romp (which never comes close to taking itself seriously), this is a very respectable choice. Personally I thought it was great fun and thoroughly enjoyed the dual-level narrative, in which the pompous and pedantic Paarfi holds court, while Brust lurks in the background, clearly having a whale of a time. In his author’s note, he explains:

Paarfi of Roundwood is the creation of a writer who, at first, wished the style of the French Romantics (Dumas, Sabatini, etc.) was still popular, then decided he didn’t care, and he’d bloody well write like that anyway.

Attaboy! And, in true Dumas style, it’s only the beginning of a series about Khaavren and his friends, the next of which is titled (with a certain inevitability) Five Hundred Years After. I’m not sure I’m going to be able to resist.