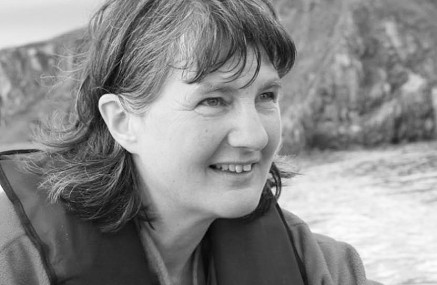 I haven’t read any of Margaret Elphinstone’s books before, but came across this novel shortly after finishing Nancy Marie Brown’s The Far Traveler. That book examined archaeological and literary sources about the life of Gudrid Thorbjarnardóttir, one of the most widely-travelled and adventurous women in the years around 1000. It’s no surprise that I leapt at the chance to see what a novelist could do with the same material; and Elphinstone’s book has proven to be a remarkable thing.

It goes without saying that the story is gripping, but what is more memorable is the way that every page is steeped in sensitivity to the mental and physical landscape of 11th-century Iceland. This is a world where the boundaries between the realms of the living and the dead are fluid; where unquiet ghosts roam in the howling winter storms; and where a long voyage might take you right out of the mortal realm and into the lands of the gods. It’s a story not just about one woman but about an entire stubborn, adventurous culture.

As a young woman, Gudrid sailed past the western confines of the world and walked the shores of a country unknown to her fellow Europeans. In her old age, however, she sets her face in the opposite direction and, leaving her grandchildren behind, sets out on pilgrimage to the ancient centre of the world: to Rome. Her incredible life story comes to the ear of Cardinal Hildebrand (the future Pope Gregory VII) who arranges for it to be written down by Agnar, a young Icelandic monk. As the Roman sun beats down, Gudrid conjures up the stark, austere landscapes of their home country, a world away from this languid Italy:

I remember clear, short days in winter, and moonlit nights when Stapafel lay like an unearthly black shadow over our lives, and dark evenings when the northern lights flickered over its head. The gods walked up there, and on tempestuous nights we could hear Thor battle with the demons who live in the heart of the mountain.

Gudrid is the only daughter of an impoverished Icelandic landowner, and foster-daughter of a down-to-earth farming couple. As a teenager she follows her father to Greenland, which – despite its name – proves to be even wilder and more barren than her native country. Here they rejoin her father’s old friend Eirik Raudi, who has made himself chieftain of the new settlement. Clinging to the western edge of the world, with few natural resources and a cruel climate, the Greenlanders are driven to investigate stories about a new land said to lie further off into the west. When Eirik’s son Leif comes home from an expedition with stories of a country rich with wheat, timber and grapes, he and his brothers are determined to stamp their claim of ownership on Vinland and all its treasures. Gudrid will be among the first company of settlers, who find a double-edged dream waiting for them: a land of fabulous natural resources, inhabited by dangerous creatures, skraelings, who don’t take kindly to these aggressive, tall, blond strangers.

The book occasionally switches from Gudrid’s first-person narrative to a more lyrical third-person point of view. It sometimes feels a little jarring but the result is a much richer, rounder story than could have been told by one person – and it allows Elphinstone to show us things that Gudrid might choose to avoid. This was used quite effectively in the scenes dealing with ghosts and corpse-magic. For once I felt that these more supernatural scenes worked very well: they were horrific, but they were described with the matter-of-fact attitude that people at the time must have felt. The horror is not that the dead can walk, but that they do walk, and the question is what can be done to settle them. These deeply-rooted beliefs persist in the wake of the coming of Christianity – and indeed it’s interesting to see how Elphinstone tackles the integration of the new religion with the old, in comparison to King Hereafter (which deals with exactly the same period). Christianity is here a women’s religion, something seized upon by those who have no warriors’ afterlife to look forward to. For them, Christianity is one option among many: conversion is little more than a case of trying out a new god when the old ones haven’t come up to scratch:

It’s all very well for a man at sea to pray to Thor, but here on land we’re overrun
by demons, and more and more people are being driven off their land by the dead
who refuse to lie quiet. This new power may be just the thing we need.

This doesn’t change people’s engagement with their surroundings, of course. Trolls and witches and the old gods are still there, but the Christians can only hope their god is strong enough to protect them. In Iceland, a world of fire and ice, the very landscape can only be explained by legends. Even the Christian Gudrid sees the volcano Snaefel as a gateway between the mortals’ realm and the gods’: ‘Under that smooth cone of white lie the doors of Niflheim, where hel rules.’ And this landscape itself – bleak and stark at first glance, but full of beauty to Elphinstone’s eye – is so richly described as to be almost a character in itself.

Something I particularly liked was that Elphinstone never lets you forget that this isn’t just a story: it’s a transcript of a woman telling her story to someone else. For example, in Agnar’s introduction he feels compelled to justify his actions; not only in transcribing Gudrid’s story but in writing down the legends and stories of his fellow Icelanders – an act which many see as abhorrent: ‘Both bards and common folk say that it is a kind of death, to put into black words on vellum what should be alive, spoken and sung when people are gathered together.’ He loyally writes down exactly what Gudrid says, even when she digresses – as she does increasingly, as time goes on and she grows fonder of the awkward young monk taking down her narration. She coaxes him into conversation, and the transcript has playful lacunae where Agnar effaces his own part, so that we only have Gudrid’s fragmented responses – cleverly framed so that Agnar’s excised comments can almost be reconstructed, like ghostly echoes.

It is a beautiful book, which is just as successful when describing the sun over fjords or ice-fields as it is when plunging you into a desperate struggle for survival aboard a tiny boat in a rough sea. If you’ve read The Far Traveler or King Hereafter or any of the sagas then you should try this too; it’s one of those rare novels that creates an inner spiritual world for its characters which is just as vivid and absorbing as their outer world. Gudrid is an attractive narrator: courageous, stoic and blessed with the tolerance that comes from a life negotiating the boundaries between worlds. She has passed from pagan to Christian; from familiar shores to the otherworldly mysteries of Vinland; and she has bridged the line so often drawn between women’s work and men’s work. The tale is tinged with the dreamy melancholy of an elderly woman. Gudrid is relict of a dying age of heroes and adventure, and she finds herself on the threshold of a new Christian world which believes it has an answer for everything. But how can that be, in a world where so much still lies over the horizon? Gorgeous.

Our world is made out of the empty places, Agnar,
and we’ll never touch anything but the fringes of the unknown.