J.M.W. Turner grew up with water always close to hand: his childhood was divided between London, on the banks of the Thames, and Margate, on the Kentish coast. In the last quarter of the 18th century, this was a world of sail power, where fishing, travel or warfare depended on a good wind. By the time he died in the mid-19th century, however, that world had vanished, replaced by steamships, ironclads and roaring coal furnaces. The sea remained central to British life, though, and it found a similarly enduring place at the centre of Turner’s art.

By the end of his life Turner would have represented the ocean in many different moods: in glassy calms and tempestuous swells, shimmering in sunlight or brooding under heavy skies. The National Maritime Museum’s winter exhibition homes in on this specific aspect of his art and it’s a match made in heaven between venue and subject. The show has already come in for considerable praise and it’s well worth the short journey out of town to Greenwich. By placing Turner in the context of his predecessors and contemporaries, the NMM only emphasises the dazzling originality of his maritime art.

Every artist depends to some extent on those who came before him, and Turner was no exception. The show begins with paintings by the artists whom he most admired: the great 17th-century Dutch marine artists Willem van de Velde and Ludolf Bakhuizen; the celebrated landscapist Jacob van Ruisdael; and the elegant French view-painter Claude-Joseph Vernet. I was slightly surprised not to see anything by Claude Lorrain, who was Turner’s favourite artist and whose classicised harbour views exerted such an impact on the young Londoner. However, the exhibition makes it clear that Turner didn’t slavishly follow any of these painters: on the contrary, he selected what he liked from them, and rapidly developed his own artistic vocabulary. His first exhibited picture, Fishermen at Sea, was painted in 1796 when he was only 21, but it’s already extremely accomplished and shows the startling quality of light that would become so characteristic in his mature works. It also shows that Turner was already struck by the contrast between the smallness of man and the vast emptiness of the ocean. Technically and aesthetically, it’s a beautiful picture: the sea has a phosphorescent greenish sheen, and the moon rides among streamers of cloud above. 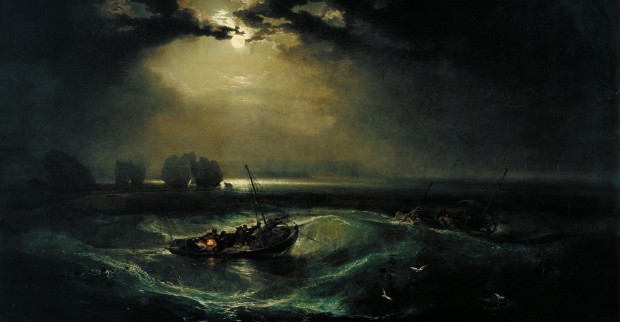 Turner was a prolific watercolourist as well as a painter, and this medium offered him the scope to play with an even broader range of light effects. He used thin washes over white paper to give an impression of luminosity; and he would frequently go back to a finished watercolour to add further accents of light by scratching-out. I was very happy to discover that the exhibition had a whole room devoted to his drawings, which included those made in preparation for his publishing projects, as well as more fluid, spontaneous studies. The most daringly abbreviated of the latter, such as Ship in a Storm (c. 1823), foreshadow the abstract oil sketches he made towards the end of his life, in which all form dissolves into mist and water. At the same date, however, he was also busy executing highly-finished watercolours like the charming view of Plymouth with a Rainbow (c. 1825). This prospect over the bay, with its vibrant deep blues and animated composition, was intended as part of a print series showing ‘The Ports of England’.

While Turner was experimenting in watercolour, he sought to make his name with ever more dramatic pictures to prove that he was equal (or superior) to any of his contemporaries. One of his most imposing forays into the realm of history painting was The Battle of Trafalgar (1823-4), a towering canvas measuring nine square metres. Everywhere the eye turns there are tumbling sails, stricken mariners and clouds of cannon-smoke. It’s over-the-top to modern eyes, but it’s a stunning assertion of ambition nonetheless. History painting wasn’t to be Turner’s metier, however: his works were fresher and more inspired when they came closer to nature. Throughout his career, he turned out a series of splendidly vigorous stormy seas. Waves rise up in improbable vertical swells even in mild seas (‘Now For the Painter’ – Passengers Going on Board, 1827), while the full fury of a storm unleashes breathtaking windswept visions of crashing surf, in which mankind is dwarfed by the daunting power of nature (The Wreck of a Transport Ship, c. 1810, is a splendid example of this). When he chooses to show serene, calm seas, it’s often an excuse to show off an extravagant delight in the sparkling of sunlight on water.

In a pair of pictures exhibited at the Royal Academy in 1834 and 1835 respectively, Turner chose to explore two very different harbour scenes, intended as pendants. The first shows Venice: The Dogana and San Giorgio, in which a warm pink-gold light bathes the glassy surface of the Bacino and Venice wallows in its antique serenity. The second, rather unexpectedly, shows a view on the River Tyne in the industrial north of England, Keelmen Heaving in Coals by Moonlight. Here the light is sharper and cooler than that in Venice, the palette toned down to blues and silvers. What was Turner trying to achieve here? I haven’t read the catalogue yet, but was it as simple as a comparison between Italy and England, day and night? Or does he invite us to see Venice as an antique, crumbling city living by means of its fading past – and England as a vibrant, industrial nation, fuelled by the black-red flare of coal fires?

If that’s the case, then Turner’s view of industrialisation has an ambivalence. His Tyneside view is a picture of two halves: the left is peaceful and timeless, in which rigged ships ride at anchor in a silver-white calm; while on the right the delicate light is elbowed out by the ugly black smoke billowing up from the furnaces. This aesthetic contrast between the age of sail and the age of iron reappears, even more lyrically, in what is probably Turner’s most famous and most beloved painting. The Fighting Temeraire (1838-9) takes its place as one of the highlights of the show: an elegiac vision of a great Napoleonic warship being towed away to be broken up at the end of her useful life. Turner gives the scene a romantic melancholy: against a sumptuous red-and-gold sunset, the Temeraire is proud, pure and shimmering white. Already ghostly, she towers above the stout little iron tug which tows her away, belching flaming black smoke up into the evening sky.

As we pass into Turner’s late works, his forms become ever more volatile. The final rooms feature some of his watercolour and oil studies from the Turner Bequest at the Tate: works never meant to be seen by anyone other than the artist, which show how he built up his pictures from fluid sweeps of colour. Immensely free and abstract, these sketches reduce a scene to its simplest essence, as in the Harpooned Whale from 1845, in which streaks of grey and red resolve themselves into a dynamic and shockingly blood-soaked narrative. Some of these are more legible than others, I’ll admit, and Turner’s visions become even more challenging in his very final oil paintings. Sometimes the forms are lost almost completely in a canvas where light and texture become the dominant principles, something we see in Off the Nore (1840-45). But in some cases that disintegration of forms creates something stunning. Turner’s Snow Storm: Steam-Boat off a Harbour’s Mouth (1842) was pretty universally panned by the critics when it was exhibited in 1842; but to modern eyes it is literally awe-full. The swirling snow blends the sea and sky, creating the impression of a mighty vortex closing in on the stricken ship at the centre, which is tossed and turned in the unforgiving lap of the waves. It is fitting to have this as one of the final images – a raw and primitive vision of what the sea is; a world away from Vernet’s classically-tamed harbours or Claude’s languid Roman visions. And that’s what’s so wonderful about this show, because it celebrates Turner’s creativity and daring as a painter – looking at him in the context which he so frequently and ambitiously surpassed.

If you have the chance, go to Greenwich and lose yourself in these tumbling seascapes. The catalogue is well worth the investment too. It has a number of scholarly essays, illustrated with further works by Turner and his contemporaries which weren’t actually in the show, and so it forms the perfect complement to the exhibition. All in all, a great achievement – and, judging by the number of people when we visited, it’s going to be an equally great success.

3 thoughts on “Turner and the Sea”