Does anyone know of a better photo of Anya Seton than this showing her on her wedding day?

It’s about time I read Dragonwyck: I bought it at last year’s village fete and we’ve just, last Saturday, had this year’s fete. Of course it initially caught my eye for its rather hideous 1970s cover, but then I realised that it was by Anya Seton, who wrote Katherine, which I’d read and enjoyed, and so I thought I’d give it a go. Now, I’ll be frank and admit that I didn’t enjoy this as much as Katherine, and in fact found the heroine a bit of a wimp, but it was still fun to read as an undemanding piece of Gothic sensationalism. Moreover, I’ve hardly read any historical fiction set in America (beyond Gone with the Wind) and so Dragonwyck went some way towards filling that gap.

Miranda Wells is the eldest daughter in a simple, honest and devout farming family who live near Greenwich in Connecticut. Unlike her brothers and sister she has always been a dreamer, caught up in tales of knights and ladies and fluttering romance: the modest country life, with its stout, clumsy suitors, holds little appeal for her. Fortunately for Miranda, she looks the part of a romantic heroine, with a delicate figure and tumbling golden hair (as we’re often reminded). Her life undergoes a monumental change one spring day in 1844, when a letter arrives for her mother from a gentleman named Nicholas van Ryn, a cousin whom Miranda didn’t even know she had. It invites one of the Wells girls to come to live with him and his wife, to serve as governess to their daughter and to acquire some social polish. (It occurs to me now that this is precisely the situation parodied in the opening of The Privilege of the Sword.)

Miranda heads off, intrigued to meet this unknown cousin and resolving to make the most of her stay with this – as she assumes – venerable gentleman and his wife. But of course Nicholas van Ryn isn’t venerable at all: he is a handsome, brooding, Byronic hero in the Rochester vein (there’s a lot of Jane Eyre bubbling under the surface here). We all know from the moment he strides into the hotel lobby to meet Miranda and her father that Miranda’s susceptible little heart is doomed. She accompanies ‘Cousin Nicholas’ back to Dragonwyck, his gloomy Gothic pile perched on a cliff overlooking the river. Naturally the house couldn’t be more dramatically foreboding if the words were blazoned on its façade in neon letters. Here Miranda meets Nicholas’s wife, the lonely, embittered Johanna, who deals with her husband’s indifference by comfort-eating; and their strange little waif of a daughter, Katrine. But she also finds a household whose nerves are stretched to breaking point, and haunted by the van Ryn family history, and her arrival – innocent though it may be – becomes the catalyst for tragedy.

Of course the whole thing is terribly melodramatic, but although I personally don’t tend to go in for that sort of thing, I did find the historical context very interesting. Society is divided between the social elite, who are the descendants of the original Dutch settlers who came over to New Amsterdam (as it was then) and the new, forward-thinking men who want to break the shackles of the Old World hierarchy once and for all. The story unfolds against the background of rioting tenants who refuse to pay rent for the privilege of farming land that has been worked by their families for generations, and the disintegration of the patriarchal system that has supported men like Nicholas. My American history is shaky, but I imagine these are the first rumblings which, fuelled by other issues, will eventually erupt into the American Civil War. Seton throws in a few cameos as well – probably more than I picked up on – including James Fenimore Cooper and Edgar Allan Poe.

The characterisation wasn’t necessarily all that striking, as I couldn’t help feeling that it was based around stock characters such as The Romantic Heroine, The Brooding Hero, The Inconvenient Wife and The Plucky Man The Heroine Should Have Noticed From The Beginning, but there we go. As I said earlier, I wish that Miranda had had slightly more substance, because I found it difficult to sympathise with a heroine whose main selling point was her striking beauty, but perhaps I am being overly hard on her. Nicholas, however, I found very interesting and not just for the obvious tormented hero aspect, but because we were given intriguing hints about his psychology that were never really exploited to the full. For example, we’re told that his mother died when he was twelve; we’re shown a man who is devoted to his family history and home; and, moreover, a man who simply believes that he is of such a status that the ordinary rules don’t apply to him. He judges his actions not on what is legally or ethically right, according to the majority of people, but on what solves his problems most efficiently. And, although he does villainous things at times, Seton can’t quite bear to make him an outright villain, offering him a final stab at selflessness and redemption.

This will probably be too sentimental and melodramatic for some – it usually would be for me, but I needed something slightly fluffy – but it’s an enjoyable example of its genre, albeit heavily influenced by Brontë. It’s a little glimpse of New York in its infancy and of social mores and manners across a whole cross-section of society at the time, though I’m not qualified to say how accurate the flavour is. If you’ve enjoyed things like Katherine or perhaps Forever Amber, then you might well like this too (though it doesn’t share Forever Amber‘s lust for life).

I can’t resist concluding with a cover feature, to honour the various artists who’ve nobly risen to the challenge of condensing all the drama of the story. A particular highlight is the cover which has the splendid tagline, ‘The great lady could not avoid the evil that lurked in the halls of Dragonwyck’ (lacking an exclamation mark, I feel). If anyone has any old copies of Dragonwyck lurking on their shelves with cover designs to add to these, please do post a link for us all to enjoy. 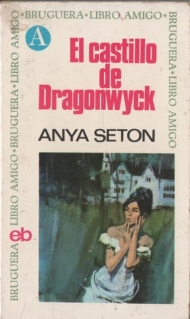