Arthur Miller’s 1953 play about suspicion, accusation and popular hysteria has just opened at the Old Vic and, on the basis of the preview performance I saw last night, it may well be the most powerful and intense piece of theatre in London this year. The director Yaël Farber has stripped the play back to its essentials and the action unfolds in a claustrophobic, twilight world clouded with smoke and struck through with shafts of bright light.

The costumes are inspired by the 17th-century but very simple, almost timeless, in silvery shades of black and grey and brown. With only a few pieces of furniture for their props, the cast perform the play in the round – the theatre has been transformed, with the stage brought forward into the heart of the audience, and it gives the production a heart-in-mouth intensity. I was some distance away, but can only imagine the impact of sitting in one of the front rows, where the actors pass within arm’s length and you must almost feel part of Salem itself. It is not an easy play to watch and it certainly isn’t short – this performance lasts for four solid hours and you’ll be lucky to get home before midnight – but it works its compelling magic on the audience and the stage design makes it a visceral, intimate experience.

There has been a lot of talk in the press about certain members of the cast, whom I’ll come to in a moment, but The Crucible is first and foremost an ensemble play and all the company are very strong. As Elizabeth Proctor, for example, Anna Madeley gives a performance of exquisite understatement, in which a surface coolness masks a powerful attachment to her husband, which she simply doesn’t have the physical or emotional confidence to express. Adrian Schiller, as Hale, gives us a humane and troubled man, whose original confidence in his own faith and goodness cracks in the face of Salem’s spiralling chaos. 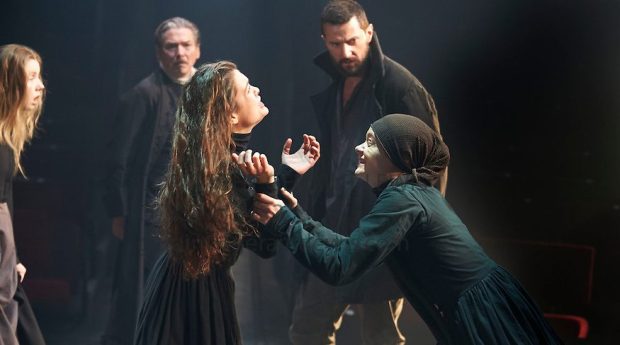 And I was also particularly impressed by Natalie Gavin’s Mary Warren: anxiously wavering between terrified submission to her master, flashes of self-importance and adolescent hero-worship of Abigail. When she is forced to denounce her friends as liars to their faces, my heart went out to her as she stood trembling with fear in front of the other girls’ passive, calculating silence. To keep up the intimacy of the play, the actors themselves come on to move furniture in the dreamlike scene-changing sequences.

It is amazing to think that Samantha Colley, as Abigail, is fresh out of drama school. She hasn’t even done her final exams yet (I have a hunch she’ll pass) and she turns in a brilliant performance, veering between girlish passion and adult vindictiveness. Her Abigail is a manipulative, cunning minx who is intoxicated by her own power over others; but she’s also a teenage girl with a crush – a fatal combination. Abigail swiftly realises the dangers and possibilities of her position: she can only deflect suspicion from herself by implicating others, and she begins to see a way to get back at those in Salem who have spurned her. But as the accusations begin to get out of control, it isn’t always easy to see whether Abigail herself, at some point, begins to believe that her own inventions are real. Her chemistry with Richard Armitage’s John Proctor crackled off the stage, especially in the physicality of their first scene together, and Colley conjures up the kind of sensuality you well believe could turn a man’s head.I’ll tell you what’s walking Salem—vengeance is walking Salem. We are what we always were in Salem, but now the little crazy children are jangling the keys of the kingdom, and common vengeance writes the law! (John Proctor – Act 1 Scene 2)

And of course I was looking forward to seeing what Armitage (last featured on this blog as Thorin Oakenshield in The Hobbit) would make of Proctor. It’s not the easiest role: he can’t win the audience over through eloquence or wit, and he has old-fashioned virtues: stoutness of heart, honesty, and a strong, simple faith that distrusts frills and furbelows. We have to be convinced of his innate goodness. And I’m pleased to say that Armitage turns in a splendid interpretation. He gives us a Proctor who on the surface is taciturn and solid, a good neighbour, and a pillar of the community; but who, within, is troubled by his own barely-contained passions. His relationship with Madeley’s Elizabeth was heartbreaking in its restraint and caution, thrown into relief by their final desperate embrace.

It’s a subtle emotional performance backed up by an incredibly powerful physical presence: at six foot two, Armitage towers over Colley’s Abigail. I was interested by a comment one of my neighbours made: she said she’d always seen Proctor played by an older actor before (whereas my touchstone was the 1996 film with Daniel Day-Lewis). Armitage has much in common with Day-Lewis, in fact, and it thoroughly makes sense to have a younger actor in the role: one who can convincingly turn a young girl’s head.

At the moment, only three days into its run, the play has a raw and galvanising energy; the challenge for the cast and director will be to ensure that doesn’t fade away as time goes on. If you have the chance to see it, I would thoroughly recommend it (just don’t sit in seats D10 or E10 of the Dress Circle, because you will be behind a pillar): the combination of play and staging is remarkably successful. Yes, its sheer length may prove a challenge for some, but the measured pace and significant silences add so much to the atmosphere of the play: it would be a shame to cut too much. For my part, it’ll be some time before I can shake off the image of Richard Armitage, towering in shackles in the centre of the stage, roaring out John Proctor’s anguished defence of his dignity:

Because it is my name! Because I cannot have another in my life. Because I am not worth the dust on the feet of them that hang! How may I live without my name? I have given you my soul, leave me my name!