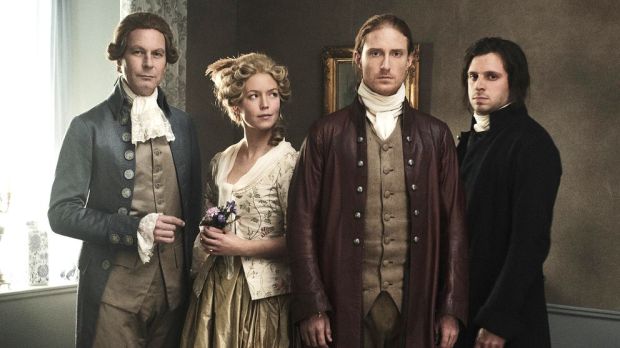 I’ve been meaning to write about this for ages and, if I don’t do so now, I will completely forget to mention it; and that would be a shame, because this really is rather good. You’ll be aware by now that I don’t really do crime fiction. It’s not that I have a problem with it per se, but I prefer historical fiction and fantasy, and there are plenty of those books to keep me amused for now. I read The Girl with the Dragon Tattoo, of course, but the Millennium Trilogy is about as far as I ever got into the Scandi-crime field. However, I recently stumbled across Anno 1790, an excellent 2011 TV series from SVT (the Swedish national broadcaster). It combines crime investigation, historical drama and just a hint of illicit romance. It’s full of gorgeously bleak, brooding views of 18th-century Stockholm and features a sensitive, educated and equally brooding hero.

Plus, the poster design reminded me inescapably of A Royal Affair, which must be intentional, because there are some similar themes: love triangles, Enlightenment versus tradition, handsome doctors, and so forth. Obviously I was totally hooked.

Johan Gustav Dåådh (Peter Eggers) is an army doctor serving at the bitter end of the Swedish war against Russia in 1790. As a principled and humane man, he is sickened by the death and misery he sees around him and, when the fighting is done he decides to make his way home and set up as a professional physician. En route he stops off in Stockholm to see that his wounded comrade, Simon Freund (Joel Spira), is safely returned to the house where he works in peacetime as a tutor. Dåådh never quite manages to continue his journey. Freund’s employer Carl Fredrik Wahlstedt (Johan Kjellgren) is the head of the Stockholm police force, such as it is, and when he loses his criminal inspector, he persuades Dåådh to fill the post.

Dåådh is uniquely qualified, of course. His skills as a physician allow him to undertake a primitive kind of forensic study which brings him closer than ever before to the truth of a crime. His Enlightened beliefs mean that he always looks for the human motivation in the cases he studies. And his youthful involvement in revolutionary politics make him only too well aware of the dangerous undercurrents broiling beneath Stockholm’s apparently placid surface. But his fitness for the role isn’t the only thing which keeps him in Stockholm. From his first meeting with Wahlstedt’s intelligent, undervalued wife Magdalena (Linda Zilliacus), Dåådh utterly loses his heart to her, even though he knows he can never have her. The scene is set for an exquisitely tormented romance.

The crimes themselves aren’t really the main story here. This is a world on the cusp of change, which is trying to dig in its heels for as long as it can. Young idealists are plotting in the shadows, waiting for their chance to strike at royal power and bring down the oppressive monarchy. They’re also keen to strike at their old comrade, now that Dåådh seems to have gone over to the establishment. In reality, his only crime is trying to exert a more measured, reasoned kind of change from within, rather than pulling down the very fabric of society and starting again. It’s a febrile time. Yet Stockholm’s blinkered social elite, represented by Wahlstedt, cling to their traditions and refuse to learn from the example of their unfortunate French neighbours. There’s a strong sense that if they ignore the new, it’ll all just go away. Dåådh’s old-school colleague Nordin (Richard Turpin) is trying the same tactic with the young upstart who’s suddenly been promoted over him and is making him look bad.

The struggle between tradition and idealism is reflected in the challenge posed by science to religion. An atheist and intellectual, who has studied Voltaire and Descartes, Dåådh is the face of this new generation. He doesn’t just face opposition from the likes of Nordin and Wahlstedt, however. Even Freund, who is now Dåådh’s sidekick, flatmate and close friend, finds it hard to accept the changing sensibilities of the time. Genial, loyal Freund struggles to live up to the standards demanded by his devout faith and all too often ends up drowning his perceived imperfections in alcohol – much to Dåådh’s exasperation. At least Freund can comfort himself that he’s helping Dåådh lay down the law with justice and fairness. You get the feeling, in fact, that Dåådh has saved Freund twice over: once on the battlefield and once by giving his life a sense of purpose beyond the confines of a bottle.

I’m a big fan of subtle dramas in which much is left unsaid, and this is a little gem. Dåådh, Magdalena and Freund each have their own demons and hidden torments, but they struggle against them oh-so-politely. For most of the series, everything is sublimated into lingering glances across crowded rooms, conversations where lips and eyes are saying entirely different things, or, in Freund’s case, just getting absolutely blind drunk. I wish I knew whether a second season was planned. There doesn’t have to be one – this one finishes at a point which would afford a tidy conclusion – but I’d really rather like to spend more time with the characters. If nothing else, it’s made me even more keen to go to Stockholm one day. If you can get hold of this, I heartily recommend it. In fact I may end up buying a copy so I can rewatch it at my own pace and savour the details I missed the first time. I should probably emphasise that it is in Swedish, as you might expect, but there are subtitles of course. Oh, and I’m rather tickled to discover that there’s actually even Anno 1790 fanart: yes, folks, nowadays everything has a fanbase… 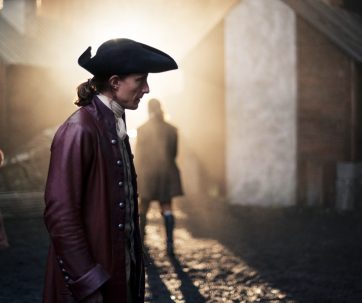 This is what Peter Eggers normally looks like. Just in case anyone was wondering