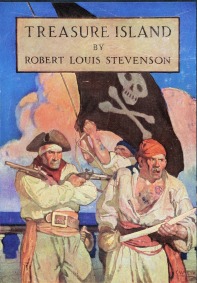 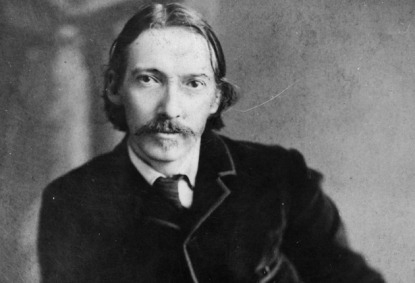 There haven’t been enough pirates around here recently (indeed, are there ever?); and, when I was looking for a quick spritz of a book to get me into autumn, I decided it was time for Treasure Island. This is without a doubt one of the greatest children’s stories or adventure novels ever written, but I’m ashamed to say I’d never read it before.

I’m not quite sure how I managed to avoid it: there was plenty of piratical spirit in my childhood. I grew up in Bristol and we spent our holidays caravanning in Devon and Cornwall, armed with an inflatable dinghy we’d christened the Black Pig. How did I avoid the Great Pirate Novel? On the bright side it means I can come to it now, older, wiser and perhaps even more prone to adore it because I can savour its enormous impact on popular culture. For a little book, it casts a long shadow. Davy Jones’s Locker, pieces o’ eight, rum, parrots, peg-legs, buried treasure and, of course, maps where ‘x’ marks the spot… this is where it all began.

When a grizzled old sailor takes up residence in the West Country at the Admiral Benbow – his mother’s inn – young Jim Hawkins is fascinated. The old Captain takes long walks along the cliff tops looking for ships and sings rum-soused songs, but it rapidly becomes clear that he has a dark past behind him and that history is on his tail. Indeed, when he is visited by an old shipmate one dark night, the Captain becomes the recipient of that dreaded pirates’ warning: the Black Spot. It is too late for the Captain to escape his enemies, but Jim finds himself unexpectedly drawn into a thrilling and very dangerous mystery.

Rifling through the Captain’s sea-chest, Jim has laid his hands on a map which will lead him into the greatest adventure of his life: the chart of an unknown island labelled with evocative names – Skeleton Island, Mizzenmast Hill, Spy-Glass Hill – and, more importantly, marked with red crosses. When Jim shows the map to the local landowner Squire Trelawney and the physician Dr Livesey, they realise that they have the clue to finding the great hoard of treasure buried by the notorious buccaneer Captain Flint, and (as you do) decide to set off in search of it. But all does not go easily. When the squire goes to Bristol to fit out a ship and assemble a crew, word of Flint’s treasure gets out. Soon it will become clear that some of the crew on the Hispaniola have more than a passing acquaintance with the old pirate: none more so than a congenial old fellow with a pet parrot and one leg, who serves as ship’s cook and goes by the name of Long John Silver.

Of course I loved it. There was never any question that I would. It’s a gloriously old-fashioned tale with a plucky young hero whose resourcefulness and wit is pitched against the dastardly plots of piratical mutineers; and yet there is something rather modern about the subtle humour which underlies it all. Stevenson was writing for children, but he knew that the book would be read to them by their parents, and so there are moments when the novel has a surprisingly psychological edge. I found Silver completely absorbing as a character: you know how interested I am by people who shift in the grey regions between starkly ‘good’ and ‘bad’. Silver is an untrustworthy, unprincipled blackguard of the first water – that goes without saying – but Stevenson gives him a beguiling charisma that means the page sparks into life whenever he appears.

If you’ve also managed to miss Treasure Island, then now is the time of year to read it. It isn’t really a summery kind of story. It’s the type of book to reach for as the nights draw in and the rough winds rattle the windows, and the surface of the Thames grows hard and iron-grey. Wrap yourself up in a blanket, get a cup of tea (or a snifter of rum), curl up by the lamp and lose yourself in a Sunday-afternoon-romp of a story, ‘full of sea-dreams and the most charming anticipations of strange islands and adventures’. For my part, this has given me the impetus to seek out some other good pirate stories for the winter: I think it might be time to revisit that other great literary pirate, Captain James Hook; and it’s probably high time to track down the ever-reliable Sabatini’s Captain Blood.