First of all, a very happy New Year to all of you! My first outing of 2015 was to the wooden galleries of the Sam Wanamaker Playhouse, to see Francis Beaumont’s exuberantly experimental play The Knight of the Burning Pestle. This was such a success last year that it’s been revived and it’s simply perfect for the lighthearted Christmas season. Anarchic, raucous and full of music, it calls for audience interaction, conjures up plays within plays within plays, and offers a strikingly postmodern comment on the act of theatrical performance. It reduced me to tears of laughter by the interval.

Imagine Don Quixote performed in the style of Monty Python and the Holy Grail, framed by sections of Shakespeare in Love, and animated by the spirit of the English pantomime, and you’re halfway there. It all unfolds in the splendidly decorated theatre: fir and holly garlands draped along the galleries and decorations studded with dried oranges, cinnamon sticks and mistletoe, everything bathed in candlelight. The air smelled of wood and wax, cinnamon, cloves and mulled wine. Perfect.

The performance begins: it’s The London Merchant, a play about the love between an apprentice, Jasper, and his master’s daughter Luce. But Luce is already promised to another: the slimy Master Humphrey. Besides, Master Venturewell is hardly likely to look kindly on his apprentice’s love when Jasper’s father is a merry wastrel and has frittered away the family’s money. In despair Jasper and Luce plan to meet in the depths of Waltham Forest and run away together…

The Grocer (Phil Daniels) and his Wife (Pauline McLynn)

But what’s this? There’s some kind of audience commotion. A London grocer and his wife are sitting in the front row down in the pit. They aren’t happy with being fobbed off with more plays about the London mercantile elite: they want to see something that represents their own experience. They’re fed up of hearing about rich merchants: why isn’t there a grocer in this? The Grocer demands that his apprentice Rafe should be given a part in The London Merchant to represent the ordinary city folk. But it’s got to be a good part, mind. And so poor young Rafe is shoved up among the actors… but it turns out that he has his own vision of the role he wants to play.

Rafe doesn’t want to be a random grocer in a play about two dull people in love. No! He wants to be a knight! He’s read far too many chivalric stories and he knows exactly what he wants to do. He’s going to play the part of a ‘grocer errant’ – bravely crossing deserts and wildernesses to rescue fair ladies and ‘distresséd damsels’, to fight giants and win renown to ornament the name of his beloved lady (Susan, the cobbler’s daughter from down the Strand). And he’s going to undertake these great deeds under the name – in honour of London grocery – of The Knight of the Burning Pestle!

The only problem is that The London Merchant doesn’t really offer plot openings of that sort – so Rafe press-gangs a couple of supporting actors from the play and brings them into his fantasy world. Tim and George become his squire and dwarf (because every knight errant has to have one of each, don’t you know), somewhat grudgingly at first; but as time goes on they too get caught up in the adventure. Rafe also procures a faithful steed in the form of a Morris men’s hobby horse, and sets off on a joyfully improvised quest. The cast of The London Merchant gamely carry on with their plot despite the excitable interruptions from the Grocer and his Wife, who frankly just want to see more of their beloved Rafe. 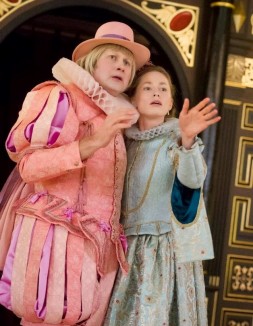 “Come, my loyal dwarf: with you and my noble steed, I can accomplish anything!” Rafe ((Matthew Needham) and George (Dean Nolan) with Rafe’s horse

And so for much of the play there are three parallel plots going on – the heckling from the pit; the increasingly frustrated actors of The London Merchant; and Rafe’s glorious chivalric fantasy. Occasionally the latter erupts disruptively into The London Merchant, as when Rafe, his squire and dwarf make believe that they’re riding across a fearsome desert, only to discover that they’ve actually stumbled into The London Merchant‘s version of Waltham Forest. It’s one of those plays that simply has to be seen, because I suspect there was also a healthy amount of ad-libbing going on, as well as pratfalls, slapstick and all sorts of sight gags which added to the sense of incipient chaos. You wouldn’t get half the joy from simply reading it.

Everything was perfectly judged. Even the costumes varied subtly depending on which ‘world’ we were in. The Grocer and his Wife were dressed in their best for their theatre trip (the effect must have been wonderful back in Beaumont’s day, when they must have looked like genuine members of the audience). The cast of The London Merchant wore showy, overly colourful, deliberately theatrical costumes from around 1600. Rafe and those he met on his quest were dressed in hastily cobbled-together ideas of chivalric finery, although Rafe did have a grand Henry V-style moment at the end when he came in wearing a more upmarket surcoat and armour.

As the Grocer and his Wife proposed ever more absurd and elaborate scenarios for Rafe, which the cast of The London Merchant simply couldn’t meet with their limited stock of props, there was an increasing sense of innovation. Rafe wants to fight a giant? Right, get Nick the Barber from The London Merchant dressed up on stilts and give him vicious scissor-hands. Rafe wants to journey to Cracovia and meet an exotic princess dressed in gold? Right. Get his squire Tim to go up in the gallery, give him a gold cloak, a hennin and a veil and get him to speak in a high voice. What do you mean, ‘what about his beard’?! He can hide it behind the veil. It’ll be fine.

(And indeed, that scene was very funny. It goes to show that English humour hasn’t changed over the last four hundred years. Dress a bearded man as a princess, get him to speak in a high voice, pretend that nobody notices he’s a man, and you have comedy gold. The audience was laughing so helplessly that even Rafe, halfway up the wall of the theatre clinging to a pillar, forgot his lines and began corpsing as the ‘princess’ overacted down at him, but that might have been intentional for all I know.)

It was completely and utterly mental, and slightly on the long side, but it just brimmed over with joy. It feels invidious to pick out particular people, but I can’t list the entire cast, so I’m going to note just a handful of performances that I especially enjoyed. Obviously the Grocer (Phil Daniels) and his Wife (Pauline McLynn) were delightful, ad-libbing down in the pit, rustling paper bags, arguing and occasionally offering sweets or beer to their neighbours. Dickon Tyrrell, whom I saw in Le malade imaginaire a month or so ago, was much more engaging as the unfortunate Humphrey, with his absurd wig, wringing every possible rhyme out of his lines. As Tim (and, briefly, the Princess of Cracovia) and George, Dennis Herdman and Dean Nolan were wonderful comedy relief; especially Nolan, who ended up pulling off some unexpectedly dramatic dance moves. Paul Rider was a superb Merrythought (Jasper’s father), performing a whole series of songs and winning over the audience in the manner of a miniature, merrier Falstaff. And how can I avoid mentioning Rafe himself? Matthew Needham was wonderful as the dreaming apprentice, whose bravery only reveals itself in the fantasy of knight errantry.

All in all, it was a simply fabulous evening – and not remotely the kind of thing I tend to expect from Jacobean drama. There’ll be a return to normal service (i.e. blood, revenge and intrigue) in The Changeling in a couple of weeks, but for now I’m just bathing in the warm aftermath of last night’s anarchic merriment. If you have a free evening between now and 11 January, and if you can get a ticket, go for it. It might well be one of the funniest things you see at the theatre this year. 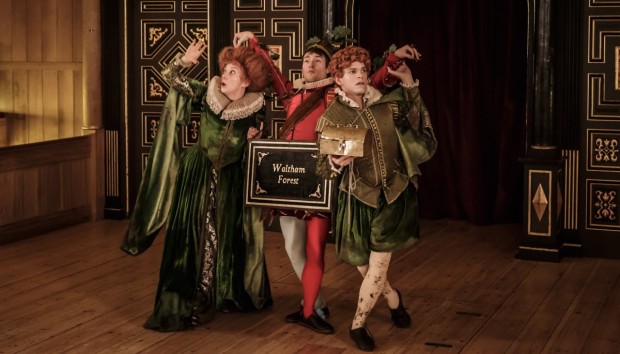 One thought on “The Knight of the Burning Pestle (1607): Francis Beaumont”