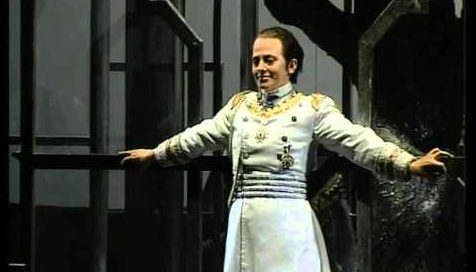 You might remember that Xerxes at the ENO was the first opera I saw after the Baroque revelations of the summer and, although there was much to enjoy in that production, I itched to hear it performed in the original Italian. There isn’t a huge amount of choice on DVD at the moment so I ended up with this 2000 performance from Dresden. I held off watching it for a while, as it had an entirely female cast of principals and a visual aesthetic which looked bleak, to say the least. Then, one day I happened to see a clip of the opening scene on YouTube. Paula Rasmussen’s Ombra mai fù stopped me in my tracks.

Even as a beginner, I’ve heard enough renditions of this aria to last me a lifetime, but this was clearly something special. Rasmussen performs it beautifully, leaning back against Xerxes’ beloved tree, barely moving but commanding complete attention, making it look languidly easy. And right from her first note, I was captivated by her voice: rich, strong and unaffected. Her Xerxes is a contemplative at heart – a philosopher – and that’s what makes his gradual descent into romantic infatuation both amusing and tragic, as this sober, meditative man degenerates into a petulant boy in the face of his beloved’s refusals.

If you aren’t familiar with the plot of Xerxes, I direct you back to the ENO post; but fundamentally it all boils down to romantic confusion. The mighty king of Persia must come to terms with the fact that not even his worldly authority can compel the beautiful Romilda to love him when she only has eyes for his brother Arsamenes. Add in Romilda’s ambitious, flighty sister Atalanta and the traditional feisty abandoned fiancée disguised as a man, and you have a recipe for, if not disaster, at least an awful lot of ill-feeling. 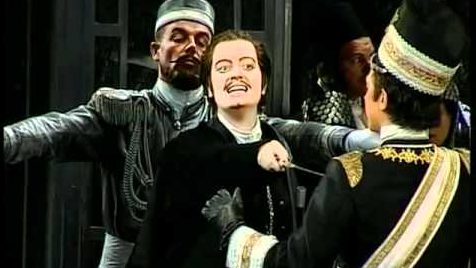 It’s so interesting to see how different two productions of the same opera can be – you can emphasise the comic angle or the tragic; you can make it a romantic romp or a warning about the misuse of power; and as a timeless story of love and authority it seems to work equally well in any historical period. While the ENO version conjured up all the grace and elegance of the 18th century, this production takes a restrained, sober tack. Both sets and costumes are almost monochrome, with only the odd flash of golden braid relieving the black and white; and the flavour recalls the Ottoman Empire rather than the Persian. Romilda occasionally looked as if she’d wandered out of one of Liotard’s exquisite Turkish pastels. The imposing sets, constructed in glass and metal, suggest the towering ambition of Xerxes’s rule – tyrannical in the old-fashioned sense of the word. Nothing emphasises this more than his beloved plane tree, cocooned in a cage which both protects and imprisons it. Does Romilda fear a similar fate for herself if she becomes his bride?

As ever, I have to base my opinion of the cast on their overall performances, because I’m not comfortable or capable judging vocal delivery in detail; but as far as I’m concerned there isn’t a weak link here. Marcello Lippi’s Ariodate and Matteo Peirone’s Elviro were both very accomplished comic foils to the main plot, especially Peirone, whose arietta Del mio caro Bacco amabile was just an absolute joy to watch. As the disguised Amastris, Patricia Bardon (whom I’ve previously seen as a splendid Cornelia) is perfectly suited, both in the deep velvety tone of her voice and the skill with which she treads the line between comedy and the pain of her betrayal. Sandrine Piau plays Atalanta and, although I don’t think I’ve seen her before, and initially thought her a bit staid, that impression went out of the window as soon as she got underway. She captured the flibbertigibbet levity of the role exactly and her bubbly, pouting mischief was the ideal foil to her sister’s great dignity. 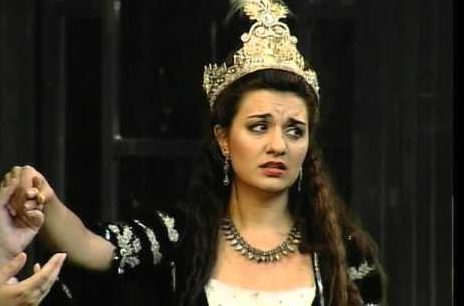 Romilda was Isabel Bayrakdarian, another singer I’d never come across, but she too won me over with her graceful gravity and the purity and power of her voice. Her affection for poor Arsamenes was thoroughly convincing and evidently very much reciprocated, even as the lovers became embroiled in their entertaining spat in the final act. As Xerxes’ long-suffering brother, Ann Hallenberg blended humour and pathos with great aplomb, and offered an amusing visual contrast to Rasmussen’s sleek, coiled power. This Arsamenes was well-groomed – evidently a bit of a dandy – and wore a gloriously silly stick-on moustache that did little but accentuate the fact Hallenberg was a woman playing a man. On the subject of trouser roles, however, both Hallenberg and Rasmussen benefitted from some clever work on the part of the wigs department. They were both fitted out with slightly receding hairlines – a tiny touch, but something that added just that little bit more verisimilitude to their maleness.

I spoke a little about Rasmussen at the start, but I should add that I was watching her particularly closely because she was responsible for delivering two of my favourite ‘angry’ arias. To her credit, she performed both extremely well. In Act 2, her Se bramate d’amar was a childishly petulant tour-de-force, all the more impressive for the duet of plaintive beauty which precedes it. The thwarted king gets to throw off some more temper in the epic Crude furie, and this production must offer one of the most dramatic renditions of that aria. Xerxes’ magnificent display of rage culminates in a frenzy of wanton destruction, showing how far he has fallen from the calm, contemplative man we saw in the opening scene. And of course this aria echoes Ombra mai fù in other, more tragic ways, which gives the scene extra poignancy. (If you, like me, are upset by the plane tree’s fate, don’t worry: the finale turns out to offer new hope for all, including the tree). My only feeling on Crude furie is that I’d have liked to hear it done even faster and even snappier – Xerxes is whipping himself up into the monster of all tantrums, after all – but I’m fully aware that sounds as if I’m asking for a cherry on top of an already rather fabulous cake.

This might not be quite as colourful as the ENO version, but it’s definitely worth a look if you fancy exploring the original libretto of the opera. Speaking of colour, you’ll be hearing more about Xerxes in due course. I’m going to see it sung in Italian in Düsseldorf in early May: a revival of an exuberant and irreverent production which won great admiration a couple of years ago, so I’m looking forward to that enormously. For several reasons. Let’s just hope their Xerxes can compete with this one…

Apologies for the low resolution images in this post. If anyone knows of anywhere with better photos of this production, please let me know. I’d be very grateful. 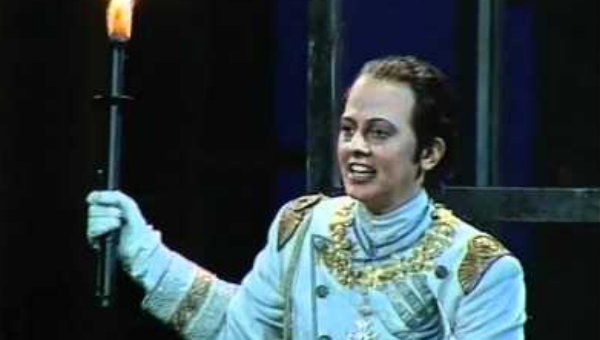