A man slumps at a table, his head buried in his arms. As he dreams, the dark creatures of his imagination rise out of the shadows behind him: a lynx, which looks up with wide eyes; bats, flocking in the darkness, and owls which mob the sleeping figure with their wings and steal his artist’s tools. This etching, made in 1799, forms part of Goya’s print series Los Caprichos and was originally conceived as an allegorical self-portrait. Its title is The Sleep of Reason Produces Monsters. For all of mankind’s pretensions to reason and rationality in this Enlightened age, Goya seems to say, we only have to sleep for our primal nightmares to come crawling out of the woodwork.

This print, still in its original album (now in the British Museum), offers a telling image to open the Courtauld’s new exhibition of drawings from Goya’s Witches and Old Women Album (also called Album D). Goya made this sequence of drawings early in the 19th century, around 1819-23. For the last fifty years intellectual elites had been striving for an Enlightened Europe, ruled by philosophy, scientific enquiry and reason rather than bound by superstition. But Goya and his contemporaries might well question what Reason had achieved.

In the last thirty years they had seen the turbulence of the French Revolution, the Republic, the Empire and Napoleon’s fall. Europe had been ravaged by war. Spain itself had suffered the savageries of French oppression after the Dos de Mayo rising in 1808, the miseries of the Peninsular War and then the regression of the Bourbon restoration. Goya, as court painter to the kings of Spain, saw much of this at first hand. His bewilderment and isolation must have been increased by the fact that by this date he was deaf, as the result of a life-threatening illness, and so the world must have had a further layer of confusion. Unable to express his emotions in his public works, he took to making drawings in notebooks, which were later bound as albums.

These became a private, personal commentary on the world he saw around him, bitterly satirising not only its social and political upheavals, but also the unchanging fears and foibles of human nature. Nowadays the drawings are dispersed among various collections and this exhibition marks the first time that anyone has reassembled an entire album. The Album D drawings are displayed (in the order of the reconstructed album) alongside drawings from the Black Border Album (Album E; 1816-20) which show similar themes, and with some of the early lithographs that Goya was making at the same date. The series is introduced by a selection of prints from Los Caprichos and thematically related drawings from his later Bordeaux Albums (Albums G and H; 1825-28). As usual for Courtauld shows, it makes for a tightly-focused and very rewarding exhibition.

Even in his paintings Goya is generally a challenging artist, but the drawings offer a particularly vivid and haunting glimpse into his troubled soul. Displayed in order, the drawings take on greater meaning as you follow Goya’s themes and thought processes. His intentions are never entirely clear – his iconography is immensely personal and bound up with proverb and folklore – but each image becomes more understandable as part of a whole: figures rise and fall, tumbling in the air, and then give way to scenes of witchcraft and sleep, dreams and nightmares, rounding off with a series of wizened old women who might be pious devotees, bawds or witches still.

Some of the drawings are energetic and almost joyous, like the delightful Regozijo (Mirth), where a pair of cackling old figures dance in mid-air to the clatter of castanets. Others, like Pesadilla (Nightmare) give the frustrating feeling of a meaning fluttering just out of reach: a grinning old women carries two scrawny old men on her shoulders, piled up like a troupe of acrobats. 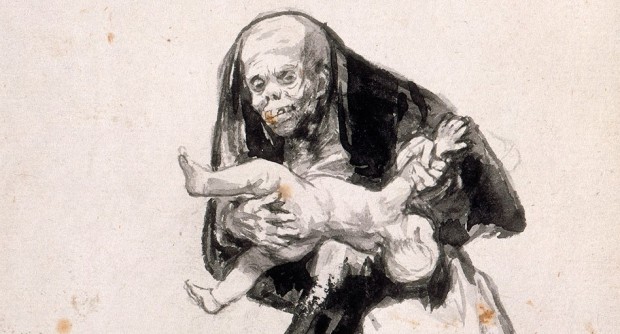 And some are deeply disturbing: the skeletal old hag in Mala majer (Wicked woman) who raises her skull-like face to peer out at us, about to devour the baby which hangs spreadeagled in her grip. Was this inspired by a 17th-century Spanish witchcraft trial, as the label suggests? Could it have a more political sense: a war-torn country devouring its own future? In many ways Goya is so fascinating – and troubling – precisely because his intentions remain so mysterious despite all our efforts to untangle them.

I’ve seen a handful of Goya drawings in the flesh before, but to see the album reassembled in this show struck me all over again with the sheer brilliance of his technique. He is always fluid and free: thought seems to coalesce straight into form. Sinuous thick black ink outlines, drawn with the brush, are filled with translucent veils of grey wash, the white of the paper used to great effect for highlights. He also often went back at the end and added more highlights by scraping away at the surface with a razor. The final effect is often dazzling and simply can’t be appreciated from illustrations, especially when the paper is still in very good condition, as is the case with Regozijo in particular.

And seeing the drawings at close quarters emphasises other things too: Goya’s immense humanity, for example. He might be drawing diabolical scenes or satirising old age – these crones and witches and bent old men – but these images aren’t purely horrific. His dancing airborne figures often have expressions of such glee that you can’t help but smile: look at the haggard old witch pulling the hair of her younger companion in Bajan riñendo (They go down quarrelling). 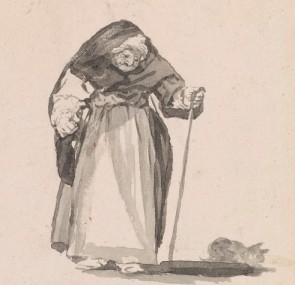 Francisco José de Goya y Lucientes, No puede ya con los 98 años (He can’t any more at the age of 98) (detail)

Goya also shows great sympathy in his depiction of elderly figures, fumbling at rosaries in No se lebantara… (She won’t get up…) or bent heavily over sticks in No puede ya con los 98 años (He can’t any more at the age of 98). Speaking of the elderly, a special mention has to go to Habla con su gato (She talks to her cat), where the cat is masterfully suggested with only a few light sweeps of grey wash.

This is a simple but very powerful show: certainly one to look out for if you already enjoy Goya, or if you’re interested by the Gothic and the supernatural. The catalogue (whose new edition seems to have been retitled Goya Bewitched) includes proper entries on all the drawings as well as a table detailing the condition of each sheet, and any inscriptions or marks. There are essays setting the exhibition in the context of Goya’s life, his printmaking and the themes which arise in his work, and a discussion of the process of reconstructing the album. To be honest, even if you can’t get to see the exhibition, the catalogue alone promises to be a very useful reference point.

And if you find the album drawings as intriguing as I do, you might want to look out for the catalogue of an exhibition held at the Hayward Gallery in 2001, Goya: Drawings from his private albums, which includes a few of the Album D sheets alongside drawings from Goya’s other series. But for now, if you can make it to Somerset House before the end of May, do go and enjoy these wonderful, vivacious drawings for yourself. 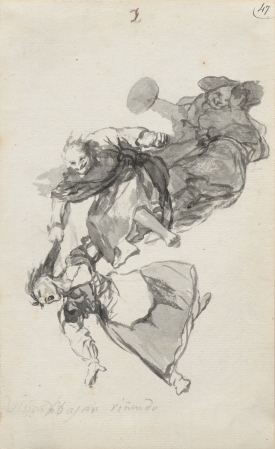