In other news, I’ve just got back from my first visit to Japan: a week in Tokyo, on business, which turned out to be one of the most enjoyable and brilliant trips I’ve ever been on. I had the good fortune to travel with some really lovely colleagues from other companies, and our hosts could not have been kinder or more eager to help: Japanese hospitality truly is remarkable and I’ve certainly now been spoiled for life as far as business trips are concerned.

Japan isn’t a country that I’ve ever particularly longed to go to: its romantic history of geishas and samurai has always had a slight appeal, and I’m very fond of some of Murakami’s quirky, magical-realist novels (Kafka on the Shore is fantastic, if you haven’t read it); but I wasn’t sure that frenetic, neon Tokyo was my kind of place. I suppose I’d been slightly put off by Lost in Translation. How wrong I was. I only had two free days and so I spent them in the city, simply walking rather than taking the subway, taking in as many of the districts as I could. I was fascinated by the dual personality of this fascinating country: the respect for heritage and history set against the desire to embrace all that is new and shiny. The Imperial Palace rises out of its moat enclosed within great dark walls, formed of stones as large as boulders, with ancient pines leaning over the parapets. Beyond you can catch glimpses of fluted roofs and eaves, and the Imperial family are cut off from the real world by bridges which terminate at impressive gateways, guarded by the police. And yet this most traditional of complexes is surrounded on all sides by towering steel and glass: vertiginous hotels and office-blocks raking the sky. 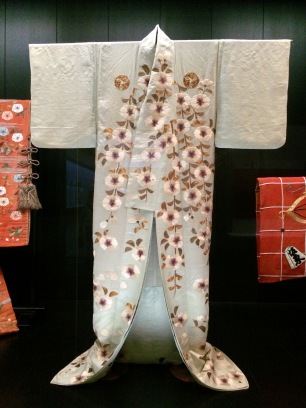 One of the more understated kabuki costumes at the National Museum, Tokyo

I spent my first free day at Ueno Park, basking in the 30-degree heat and exploring the the museums: pretty much a perfect recipe for a day out. I was particularly taken with the National Museum, which is admirably arranged with introductory chronological survey galleries on the top floor, and thematic galleries on the floor below. I predictably went into raptures over the samurai armour, with its exquisitely detailed patterns and unexpected details, such as the whiskered dragon crouched on one of the helmets. The kabuki theatre costumes were another highlight, beautifully embroidered in bold and dramatic colours (I’d hoped to see some kabuki while I was there, but alas, there simply wasn’t time); and there were also some lovely examples of historical women’s dress. Lacquerwork, ukiyo-e prints and netsuke sat alongside scrolls with elegant calligraphy; how I wished I could read them! One exhibit particularly took my fancy: an album or scrapbook filled with examples of fine calligraphy, included not so much for their content but the sheer beauty of the handwriting. Such books were sometimes given to brides to take to their new homes. It is such an elegant, simple, very Japanese tradition.

The National Museum of Western Art, which stands just a five minute walk away in the same park, has a good survey collection of the Old Masters, which seems to have been carefully assembled in order to have one example of as many great names as possible; the highlights of the collection, however, are the Impressionist pictures. There are no fewer than twelve Monets, as the museum’s founder was a personal friend of the artist. When I visited there was an exhibition on Guercino, including many paintings from Cento and Bologna which I’d never seen in the flesh before (but no drawings). It was rather strange to have to go halfway around the world in order to see them, but it was an extremely good show with virtually everything that you would want to see (save The Burial of St Petronilla, of course, but one must be realistic about the logistics). 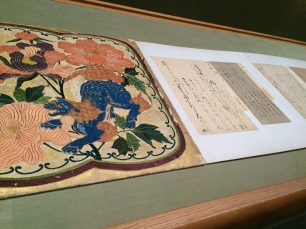 There was another interesting exhibition upstairs in the Prints and Drawings Gallery, focusing on French fin-de-siècle lithographs and etchings from the collection. Here I was particularly struck by Eugene Carrière’s smoky, ghostly lithographed portraits, whose sitters included one of the Goncourt brothers, Verlaine and Rodin. They were splendidly evocative. I was delighted to see an impression of Mucha’s 1896 poster for Musset’s Lorenzaccio, showing Sarah Bernhardt brooding in Renaissance boy’s costume, but perhaps my favourite works in this display were the etchings by Paul-Albert Besnard: a series of occasionally unsettling but always very beautifully conceived prints.

At the other end of the scale, I started my walk on the following day in the Akihabara district, a neon riot of signs and billboards which pretty much fulfilled the mental image of Tokyo that I’d had before I went. Here you find the new Tokyo: a mass of cheap electronics shops and multi-storey anime stores. I walked around two of these anime emporia, as a couple of colleagues had asked me to look out for certain things, and it was an astonishing experience. Anime isn’t a genre that I’ve ever got into, though one of my close friends at school was very interested in it. As I wandered around these five-storey shops, I found my eyes and ears boggling: TV screens blared out a constant stream of high-pitched giggling voices or music; everywhere I looked there was a proliferation of frills and cat-ears and skimpily-dressed, large-eyed, long-legged girls.

One of my missions was to find something suitable as a present for a ten-year-old girl. That proved to be difficult. So many of these images, despite looking initially innocuous, turned out to have skirts that were just that bit too short and revealing, or tops that were just that bit too low cut. Foolishly, I hadn’t appreciated how adult a lot of anime is, nor how widespread its tendency to have homoerotic undertones of either kind. By the end, panicking slightly, I grabbed what inoffensive gifts I could – picking up a badge for myself in the process (I really couldn’t resist) – and emerged gasping into the sunlight.

However, I’ve certainly been left with a desire to investigate further. There are certain manga styles I like very much – the more elegant, willowy, wispy kind of art – and I’ve just discovered that there’s actually a series about Cesare Borgia, called Cantarella, so naturally I’ve ordered the first couple of volumes and we’ll revisit the topic in due course. Incidentally, if anyone knows of a good introduction to manga and anime styles, I’d love to know. I had a quick look on Amazon to see if there was some kind of ‘dummies’ guide’, but there isn’t anything immediately obvious; and I can’t imagine that so popular and iconic a field doesn’t have some kind of handy intro to help ignoramuses like me find their bearings. 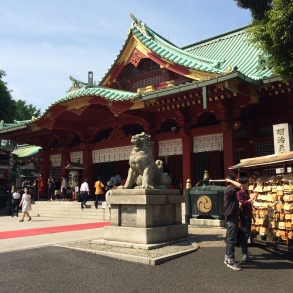 One of the pavilions on the walls of the Imperial Palace, Tokyo

We managed to pack so many wonderful experiences into just a few days. The food was absolutely delicious although, as we noted, it was a relief that we were all pretty competent with chopsticks, because there often wasn’t any other form of cutlery on offer. On a couple of occasions we found ourselves in delightful traditional-style restaurants where we had to leave our shoes at the door: once we sat on the floor in a little room with a slatted, sliding door, where we sampled sake and cooked our own broth over a brazier. It was all new and different and yet, crucially, so much less daunting than I’d expected it to be. Everyone was welcoming, friendly and immensely patient with a couple of shame-faced foreigners whose only proficiency in Japanese was ‘arigato’, ‘hai’ and ‘konichiwa’. In Tokyo, train and subway station signs show the names in Western script as well as Japanese, and many of the major road signs offer the same courtesy; many of the trains also have announcements in English (how Japanese visitors cope in stubbornly Anglophone London I simply do not know).

I came home laden with impulsive purchases: beautiful stoneware teacups; a dip-glazed rice-bowl; a lacquered trinket box. It was the most wonderful trip and I’ve been left itching to know more about this remarkable land and, hopefully, to return one day and to have the chance to explore more of its countryside. 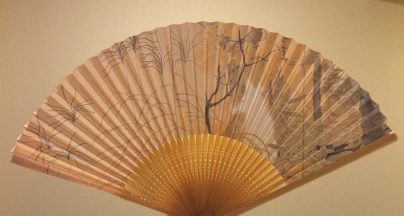 One of my keepsakes from Tokyo National Museum: a fan decorated with a white fox in a forest

One of my keepsakes from Tokyo: a chibi character badge. I felt that a samurai girl was very ‘me’

7 thoughts on “The Land of the Rising Sun (Tokyo)”