On Saturday afternoon, with the mercury rising above 30°C, we headed off to the Goethe-Theater at Bad Lauchstädt for our second staged opera of the week. This time it was the Parnassus production of Handel’s Alessandro, which is already something of a modern classic. Like Lucio Cornelio Silla, this staging sets the story in the 1930s, but its playful and vivid spirit couldn’t be more different from Handel’s tale of tyranny. Unfolding beneath a proscenium arch of Art Deco splendour, Alessandro presents us with the bristling egos and squabbling actors of the Golden Age of Hollywood.

The stars are gathered, the stylised sets have been unveiled, and the cameras are rolling on a new film about Alexander the Great; but all is not going to plan behind the scenes. The matinee idol in the leading role is starting to lord it over his co-stars offstage as well as on, not to mention displaying a worrying propensity towards alcoholism and vanity. The two lead actresses are squabbling peevishly over his attentions, while their admirers among the less glittering ranks of supporting actors watch mournfully as their own affections go ignored or rejected. Rivalries spark and flare, and life begins to imitate art entirely too much for comfort. As if that wasn’t enough, the feuds and passions of the stars are being reflected in the relationships of their dressers and stagehands, which are played out in mime during the arias and ballet music. It’s a production which astutely balances poignancy and comedy, both performed with equal facility: although there are some gloriously silly moments, the slapstick is backed up by some very classy singing.

Alessandro (Max Cencic) is tended by his ladies © Martin Kaufhold

As many of you will know, Handel wrote Alessandro for the London season in which he had, rather impressively, managed to acquire two leading ladies in the form of Faustina Bordoni and Francesca Cuzzoni. This turned into a bit of a poisoned chalice. Not only did he have to manage the ego of his leading man (Senesino was playing Alessandro), but he also had to balance the roles for the two ladies to make sure that neither felt slighted; and the fervent opposition of their fans allegedly led to skirmishes in the theatre. (All I can say is that Baroque opera nowadays is infinitely better behaved.) For me, this is actually one of the reasons that Alessandro as an opera can drag a bit here and there: one prima donna‘s aria is followed close on its heels by that of the other, in a conscientious symmetry that actually weighs down the pace of the action.

However, this production does its very best to keep things light and moving and it does a very good job. The action flits between the world of the film, with its self-conscious theatricality, and the world of backstage, in which the actresses playing Rossane and Lisaura are primped and pampered by their maids, and the actors loiter around drowning their sorrows in drink and petty feuds, and chasing the waitresses at their hotel. We switch between the two worlds in an instant. The painted flats slide out with their 1930s-style classical patterns, the blue backdrop with its golden star unfurls, and with a click of the fingers the seething rivalries of real life disappear magically behind stiff mega-watt smiles for the camera. It’s done extremely well, nodding not only to the story of the opera itself but also to the atmosphere of its composition and first production.

The cast was virtually the same as that in the video on YouTube, but with Dilyara Idrisova playing Lisaura. She was quite a find, actually. I haven’t heard her before but she had a remarkably light and agile soprano which made very easy work of her elaborate arias. I was slightly less taken with Blandine Staskiewicz as Rossane. I remember her being rather better in the YouTube version, but here she sounded rather strained and brittle, to the extent that I suspect she was probably recovering from a cold. Everyone else, fortunately, was on extremely strong form. Pavel Kudinov as Clito and Vasily Khoroshev as Cleone didn’t have massive roles but made the most of those arias they did have: Khoroshev was in the slightly difficult position of being ‘third countertenor’ behind two very strong singers, but turned in a fine rendition of Sarò qual vento, che nell’incendio spira (which concluded with him disappearing down a trap-door). Considering the high-profile roles he’s been singing recently (i.e. Catone), Juan Sancho has a surprisingly small part in Alessandro, but his Leonato still gets a rather fun Spanish-influenced aria Pregi son d’un alma grande l’amicizia and I was thrilled to see him in the flesh for the first time. I can’t wait to see him give full rein to his impressive voice at Versailles in a couple of weeks.

But, probably unsurprisingly, the main draw for me was the two leading countertenors. This was my first time seeing Xavier Sabata live, although I have a couple of his albums and I have a lot of time for his powerful and mellifluous voice. Here he played the unfortunate Tassile, whose backstage yearning for the lovely Lisaura goes tragically ignored as she pines after Alessandro. He therefore has rather a lot of lovelorn pining; but to make up for it he does also get arguably the most fabulous scene in the entire opera. At the end of Act 1, Alessandro finally loses his cool and storms off, leaving Tassile to fill in for him, and so Sabata is left to perform Alessandro’s closing aria, Da un breve riposo di stato amoroso (this seems to have been mischievously conceived only for the performances: on the CD, Cencic sings this aria). In the performance, however, Sabata / Tassile gamely dons Alessandro’s lion-head helmet – which is too small for him – and, as the cameras start rolling, warily tries to get the hang of the choreography to fit in with the dancers. Of course, despite initial misgivings, he swiftly picks it up and the closing da capo section is a gloriously exuberant Bollywood-inspired extravaganza of coordinated dance which left the audience buzzing with delight as the curtain came down for the interval. It’s a shortcut to sheer joy.

This was also a welcome opportunity to see Max Cencic in a different mood. At his Wigmore recital in December he seemed preoccupied and cool, but here he was full of energy and self-mockery. His Alessandro is the arrogant primo uomo par excellence, all vanity and self-importance, which is progressively undermined by the discovery that his perfectly coiffed hair may not be all it pretends to be; and also by the escalation of his feud with Clito into childish squabbling on stage. That scene is as close to comedy gold as Baroque opera gets. Cencic is often a very serious chap; and the sight of him being bodily picked up round the waist by the taller, stockier Sabata and carried off, gold-stockinged legs flailing furiously, is just priceless. He carries off another comedy moment in the now famous ‘drunk scene’ early in Act 2, for the recitativo Eccola in preda al sonno. It becomes even funnier because he’s not a singer whom you automatically associate with comedy: most of his past roles have been sober, noble bravura parts and it feels rather odd – but also delightful – to see him playing so much against type.

He was in immensely good voice on Saturday, employing plenty of his richly-textured lower register: this is a part of the voice that often causes problems for countertenors because it’s just at the level where they slip from head-voice down into chest-voice, but Cencic handles it with nonchalance, singing with an intoxicating velvety sweetness, which I’ve mentioned before (with reference to Hasse’s Notte amica). He also threw in some sparkling ornamentation in his more flamboyant arias, such as Act 2’s impressive Vano amore, lusinga, diletto. When he’s in the right mood and the right role, he’s certainly one of the finest performers of our generation: not only a refined technician but also a talented actor. I’m glad I’ve had the chance to see him in Alessandro, since I hear that he actually acts this role a lot more than he does Catone’s Arbace, which I’ll see later this month. 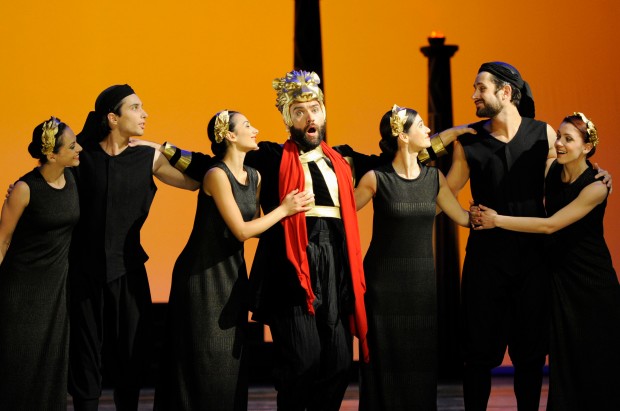 A few words on the theatre itself. This remarkable building, set in the centre of a modest village, looks from the outside like a cross between a medieval tithe barn and a Romanesque chapel. Within it has simple wooden fittings – benches, rustic chairs, a little dais at the back, an upper gallery – and a ceiling which is painted in such a way that it reminded me of a tented roof. At the beginning and during the interval you spill outside into the garden where little wooden huts sell food and drink, children in silk coats and breeches potter around selling programmes and (on this day) the patrons gather under the pine trees fluttering their fans in a desperate attempt to cool down. It’s all very charming (and with only 456 seats it’s also very intimate).

It made for a splendid afternoon, and it was a treat to see such an exciting group of singers in action in such a modestly-sized house. The only drawback was the immense heat, which left the audience wilting as the performance wore on, and fleeing for the shade during the interval. Amazingly the cast kept up their energy levels, although we heard afterwards that it had been 41°C on stage: huge credit to all of them for keeping the show going despite the difficult conditions. It was also fun to get out of Halle and have a glimpse of the surrounding area, and to witness a performance in such a characterful theatre. With this show over, only one event remained on our Halle schedule… but fortunately it was one worth waiting for.