(The UCL Classical Play; directed by Emily Louizou, at the British Museum, 20 July 2015)

Bacchae was the first classical play that I saw, way back in 2000, and it’s still my favourite. When I heard that UCL Classics students were performing the play on Thursday night at a British Museum Members’ Evening (sold out), and there was a free dress rehearsal on the Monday, I jumped at the chance to attend. Performed in an English translation by James Morwood, this was a promenade performance, unfolding amid the columns, steps and statues of the Museum’s Great Court.

This is a challenging space for a staged play, but Bacchae managed to adapt it in a creative and largely successful way. (I say ‘largely’ because there’s only so much you can do about the posters, gift-shop paraphernalia and ticket desks.) I should also add that cast and crew are old hands with the play. Earlier this year they had a successful run at the Bloomsbury Theatre, which I wish I’d seen; they also took the production on tour and performed it in the ancient Greek theatre at Messene, which must have been pretty special.

This is a dark and chilling story about what happens when gods and mortals clash, and there’s plenty of opportunity for goosebumps. The story takes place in the Greek city of Thebes, where the elderly king Cadmus has ceded the throne to his grandson Pentheus. Some years ago, Cadmus’ daughter Semele was killed, struck by a thunderbolt which incinerated her body. Her sisters (one of whom is Agave, Pentheus’ mother) claim that Semele was killed by Zeus as punishment for her wild claims that he had fallen in love with her and fathered a child upon her. Logically, the child could not have survived the inferno which consumed his mother; but Cadmus knows that logic means nothing to the gods. He has been listening to disturbing stories rising out of the east about a new god, wild and seductive, who has consumed Asia with dancing and the lethal revels of his rites. And the god is coming west, leaving Media, Lydia and Persia smouldering in his wake. 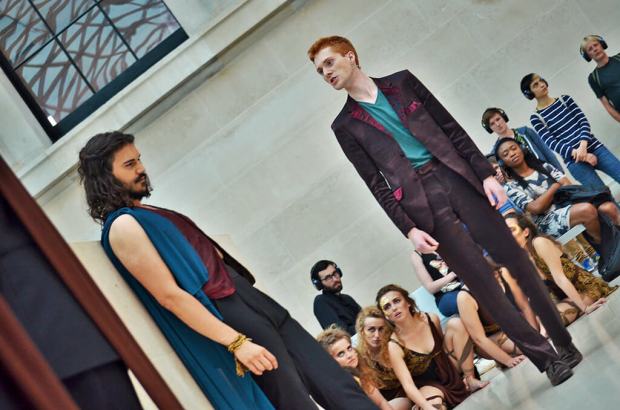 He claims to be Dionysus, son of Zeus and Semele, and Cadmus both fears and honours him. His concern is shared by Tiresias, the blind prophet, who comes to warn the Thebans to bow down and worship the god. Even Semele’s sisters, who once sneered at her, have been unaccountably seized with a Bacchic madness and have fled to the hills, dressed in animal skins and carrying the thyrsus, to follow strange rites forbidden to the eyes of men. But Pentheus, young and full of self-confidence, will have none of it. He sneers at the fretting of two old men, and when he hears that a mysterious stranger has arrived in Thebes, with an entourage of half-wild, delirious women, he simply decides to arrest them all to stop them disturbing the peace. But the beautiful stranger will shatter Pentheus’ conviction of his own rationality. It’s effectively a tale of an atheist coming face to face with a god, and the ruthless, exquisitely modulated cruelty that results.

The make-or-break role in this play is Dionysus. If your leading man lacks charisma, the premise of the whole production crumbles. Fortunately UCL are in safe hands. Pavlos Chrisodoulou may not have the flowing golden locks or the girlish looks mentioned in the text, but he turned in a performance of broodingly sensual, feline grace. There was a sense of underlying menace even during his laddishly flippant answers to Pentheus’ interrogations (I was amused that, when disguised in human form, the god slipped into a London accent).

Pentheus himself was played magnificently by Adam Woolley, who showed the young king’s physical disintegration from a roosterish pragmatist into a man undone from within by divine spite. In the scene where Pentheus consents to be dressed as a woman (so he can spy unseen on the maenads), you could see Woolley visibly crumbling. In fact, that was the most powerful scene in the show. UCL did a great job of showing that it isn’t a comic scene (“Look! Man dressed as woman!”) but something much darker and more vicious. As Pentheus was stripped and dressed again, Dionysus began to sing in Greek – I’ve no idea what it was, alas – but Crisodoulou’s voice raised hairs on my arms: it was haunting and ancient, a raw, ululating paean that showed the boundaries between human and divine were falling away. 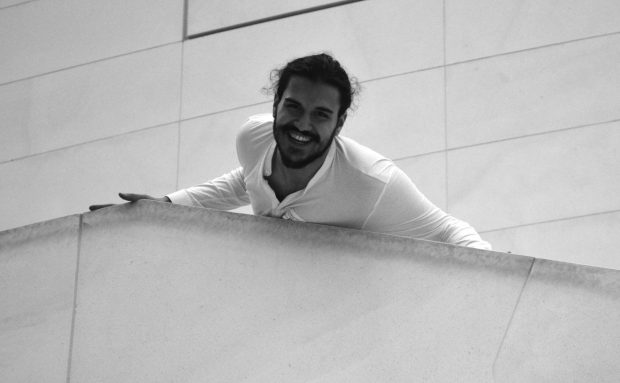 You begin to pity Pentheus. It’s not just that Dionysus has tangled his mind: in changing his clothes, he has lost his own physical sense of himself. As Woolley pattered down the steps in his robe, he seemed to have taken on some girlish traits, simperingly allowing Dionysus to adjust his veil for better effect. It’s played for laughs, but the humour is undermined by Dionysus’ dark satisfaction. He has already succeeded by making this hard, respected man into an effete laughing stock; but he won’t stop there. The gods are unforgiving when they’re crossed, and Dionysus’ ultimate target is not Pentheus but Agave and the other sisters of his mother Semele.

This was the other particularly powerful moment, as reality (literally) dawns on Agave in the final scenes. As she leaps down from the mountains, blood-soaked and exulting, it falls to the sorrowing Cadmus (Jack Tivey) to break the news of what she has done. The moment where he takes his daughter’s shoulder and asks her to look at the sky was gentle and heartbreaking – did the sky look different to her now? She was uneasy: “It looks a little brighter than before.” And that moment heralded the slow return to realisation, and the full horror of understanding what she has done. Charlotte Holtum didn’t quite capture the raw agonies of what a mother would feel in these circumstances, but she made a fine, proud Agave while still in her Bacchic frenzy, and her return to sanity was thoughtfully done.

This was a dress rehearsal, of course, and some things were still being ironed out. Some of the places where we stopped on our promenade could have been dropped without much of a loss (Dionysus and Pentheus confront one another against the bright signs of the ticket desk, for example), but on the other hand the use of the sweeping steps around the Reading Room to suggest the mountains of Kithairon was excellent. There were also slight audio glitches which I imagine were smoothed out for the final performance. The audience were given headphones which were supposed to overcome the acoustic problems caused by the vast space, but personally I found these more hindrance than help. I could hear far better when I took them off, and there was something even more powerful about hearing the voices and singing echoing around the court.

Despite these technical matters, it was a striking and accomplished performance by all concerned. The costumes, choreography and use of music were all very effective, and I’m delighted to have had the opportunity to see it, even if it was sometimes slightly disconcerting to be so close to so many frenzied maenads. I do hope the final performance went well, but I’m sure that the combination of the cast’s energy and the unusual location made for a great success. I’ll be keeping an eye on UCL to find out what they choose for their Classical Play next year; and next time I shall make an effort to see it in a theatrical setting.

One thought on “Bacchae: Euripides”