The Globe’s increasing involvement with early music has been one of the unforeseen consequences (for me) of the Sam Wanamaker Playhouse. As I’ve said before, its intimate atmosphere and warm acoustics have encouraged some truly exciting developments over in Southwark. There’s the exciting collaboration with the Royal Opera House to produce lesser-known early Baroque operas; there are concerts; and, least foreseen of all, new plays which explore the history of music. Last season we had Farinelli and the King, which will transfer to the West End this autumn and which has done so much to introduce a general audience to countertenors (and hopefully, for Iestyn Davies’s sake, to the difference between a countertenor and a castrato).

This summer season turned its focus from performer to composer, and served up an extremely limited six-performance run of this new play by Nick Drake, telling the story of the first performance of Handel’s Messiah. It’s a story that I didn’t know, and one which turned out to be surprisingly moving. It was given musical flair by the Portrait Choir, directed by Gregory Batsleer, who provided some key pieces from Messiah, including some beautiful solo singing from the soprano Roseanna Skikun and the bass Robert O’Connell.

We begin in Chester. That isn’t where we’re supposed to be. We’re supposed to be in Dublin, where Handel is meant to be rehearsing the first performance of his new oratorio. The only reason he’s stuck in Chester is because a storm has kept the ships in harbour and so, temper fraying, he does what he can. Gathering a rudimentary choir from local churches, he tries to rehearse the great chorus of his masterpiece, but it does no good. His impatience is only assuaged by the presence of a young admirer, Charles Burney, who proves to have an ardent enthusiasm for Handel’s work (just don’t mention the opera). 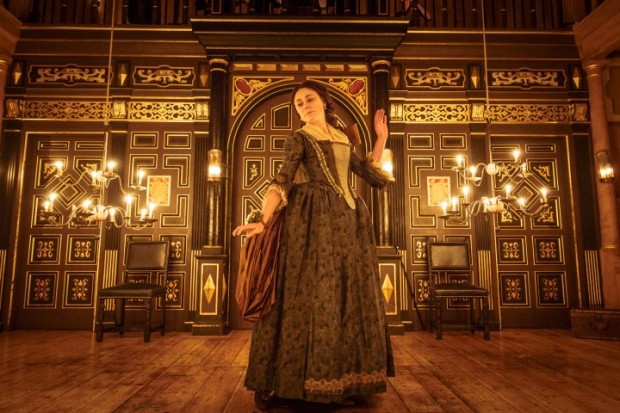 But all things have an end, even gales, and so finally Handel arrives in Dublin, where he meets his patron William Cavendish, gathers his proper choir and makes the necessary arrangements. His chosen soprano, Christina Maria Avolio, is on her way from London; but he begins to realise that he needs another voice. He needs a singer capable of taking the audience along with it on this monumental journey from promise to despair and final, everlasting hope. And, cometh the hour, cometh the man – or, in this case, the woman: Susanna Cibber, a talented actress who has come to Dublin to get away from the aftermath of a horrendously public sex scandal.

Handel and Susanna circle one another for a while, but it rapidly becomes clear that each of them can help the other. Famed for the emotive power of her performance, Susanna can give Handel’s music the dramatic delivery it needs; and Handel, with his musical message of redemption, can help Susanna to find a way to face the world again. Woven into their story are two other tales: first we have the lyricist, the reclusive non-conformist Charles Jennens. A long-time admirer of Handel’s, Jennens dreams of seeing his words turned into sublime music that will speak of a loving, forgiving, all-embracing God: the kind of God who could accept tortured souls like Jennens’s brother Francis, who was driven by despair to suicide. And finally there is Crazy Crow, the Dublin porter who lurks on the margins, and for whom Messiah will offer a glimpse of transcendent beauty that challenges the cynical nihilism that has consumed his heart.

Speech is but a whisper; but He delights to hear us sing.

The emotional punch afforded by the second act and the powerful music combined to great effect and the general vibe as the playhouse emptied was very positive. I’m glad, because I hope it means that we’ll get more projects of this sort; but I can’t say I liked it unreservedly. The first act took a while to get itself in gear and, despite the strong performances, there were times when the play itself seemed to be meandering.

With a cast of three (not counting the singers) on such a small stage, so close to a relatively small audience, you need something which grips from the very beginning and doesn’t loosen its grip on your throat until the lights go up for the interval. Here I sometimes felt the play was trying to do too much. The scene with Charles Burney could have been cut without too much of a loss. Burney did meet Handel at this time, because he was a schoolboy in Chester, but the chat between them here just felt like a way to shoehorn in some exposition for the audience. It felt a little clumsy and we didn’t learn anything that we don’t also see later in Handel’s interactions with Susanna (i.e. he doesn’t like discussing his recent failed operas; he’s not bad beneath the gruff exterior).

However, some of the other creative decisions were rather wonderful. The costumes, obviously, were stunning: the Globe is building up a fabulous collection of 18th-century dress and I hope it gets used much more in the future. I particularly enjoyed the decision to have Crazy Crow, Jennens and William Cavendish all played by the same actor – even though it came down to simply putting on a hat, or a pair of glasses, or a big wig, it was always perfectly clear who was who, and Sean Campion should be thoroughly congratulated for doing such a good job.

That leads naturally on to the rest of the cast. David Horovitch made a wonderful Handel, with (on the night I went) a thoroughly convincing Germanic snap to his accent, and a lingering hint of sadness beneath the grumpiness. Kelly Price not only looked rather like Susanna Cibber but gave her a highly plausible blend of frailty and bravura. She was also a good singer – not operatically-trained, it seemed, but with just the right kind of voice to play this actress-singer. Between them, she and Horovitch were responsible for the scenes I found most moving, in which Handel and Susanna attempt to comfort and encourage one another without trespassing too far into awkward intimacy. Frustrated by her showy performances, Handel pushes her to filter her own shame and pain into her singing. ‘Tell us the truth,’ he urges her, ‘and the words will move us with their beautiful necessity.’ When all else fails, he forces her to sing the anthem ‘He was despised’ substituting the word ‘she’ for ‘he’ and making her internalise it as a commentary on her own experiences.

For her part, Susanna almost goes too far in trying to empathise with the maestro’s quiet bitterness. She decides that he must have been wounded in love; a fact that the play itself implies, although with intelligence and grace it doesn’t descend into speculation. It also, thank heaven, resists the urge to imply any kind of romantic attachment between these two. Instead it’s just a story of two wounded souls coming together and finding comfort in sublime music. As Handel says, ‘When the heart sings, it cannot dissemble‘.

One final thing. Yes, it would have been trite and it would have been a cliché, but surely the perfect way to end the play would have been with a rousing Hallelujah chorus? After all, we begin with the ragged version in Chester, with the provincial choir quailing under the master’s disapproving eye. Why not finish with that perfected, triumphant affirmation of faith and victory? It seemed so obvious an ending that I was waiting for it, convinced it would come even as the cast took their bows. Perhaps it was eschewed precisely because it was so obvious; and yet, though I’m normally in favour of people doing things differently, here I felt we actually needed it, to draw a line under the story, to emphasise the message of redemption, and to send us out into the night as Handel’s first audience must have gone, transported.

Update: The play will be returning to the Sam Wanamaker for the 2016-17 winter season, so if you missed it first time round, this is your chance. 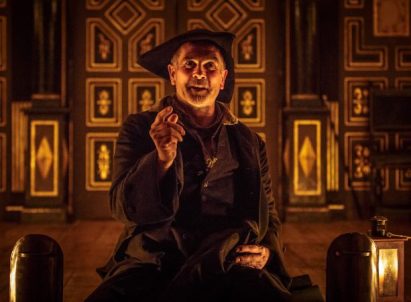