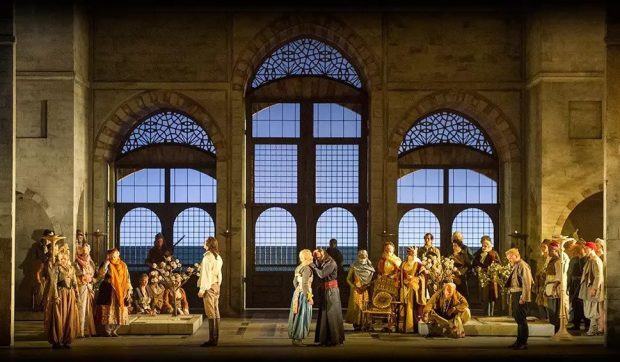 This post draws on two encounters with the same production: the live broadcast from Glyndebourne earlier this summer, and the pared down staged version presented at the Proms on 14 August. As has happened so often in recent months, I’d gone to see Seraglio without really knowing very much about it at all. I knew it was by Mozart and I knew it was about someone being rescued from a harem, but that was about it. It turned out to be rather different from what I’d imagined, and I’m delighted to say that I adored the production, largely due to its aesthetic beauty and the sheer verve with which the story was told.

In my innocence, I’d assumed this was going to be an opera, but I discovered that I’d inadvertently introduced myself to a whole new genre: the singspiel. All the recitativo is spoken and in fact the overall effect is simply that of a play (in German) which happens to have a few arias scattered through it. Indeed, some characters – including the central role of Pasha Selim – don’t sing at all.

The young Spaniard Belmonte arrives in Turkey hoping to rescue his beloved Konstanze, who has been abducted by pirates and sold into the harem of Pasha Selim. With her have gone Belmonte’s trusty manservant Pedrillo and the outspoken Blonde (often called Blondchen), who is Konstanze’s English maid and whom Pedrillo loves. But Belmonte discovers that his rescue plan won’t be as easy as he thought: Konstanze is not some lowly inmate of the harem, but the Pasha’s new beloved. Rather than force her into his bed, he is trying to woo her, to seduce her and to make her happy, and Belmonte is immediately stricken with terror that he might be succeeding.

And even Pedrillo and Blonde, who are at least able to see each other, find their love impeded by the presence of the hulking Osmin, the Pasha’s gatekeeper, who has been awarded Blonde as his own. So far, it seemed fairly predictable. Young hero; wilting heroine; a couple of Ottoman villains (scimitars, no doubt); and probably a happy ending. But actually it wasn’t anywhere near that black-and-white. The thing which really appealed to me about Seraglio was its surprising tolerance and humanity, and I’m not quite sure whether to put that down to the libretto (by Christoph Friedrich Bretzner, reworked by Johann Gottlieb Stephanie) or the happy inspiration of this particular production.

Seraglio belongs to that moment in European history when the Ottoman Turks were no longer formidable ogres at the gate, but hadn’t quite acquired the aura of profligate debauchery which came to dominate the more voluptuous kind of 19th-century Orientalist painting. And the results are intriguing. Mozart’s singspiel was performed almost exactly a century after the Battle of Vienna in 1683, the decisive moment which halted the Ottoman advance into Western Europe. Just think: Vienna itself had been under siege by the Turks only two years before Handel was born! But then the 18th century fell under the spell of the East. Liotard made his name painting exotic young women in Turkish costume and, by 1782, Mozart and his librettists were able to present us with a strikingly sympathetic picture of a Turkish pasha. Selim isn’t a stereotype: he desires Konstanze, but has the strength of character to control himself; he’s not some two-dimensional heathen, but a man who’s interested in gardens, architecture and the finer things in life. I found that rather intriguing.

Sir David McVicar’s production emphasises the ambivalence. Belmonte is the ostensible hero, but he’s only able to achieve his goal through Selim’s nobility and generosity. (For Mozart’s audiences, it was probably telling that Selim is said to be a convert: he retains the delicacy and values of a Westerner and that’s what sets him apart from the more predictably vicious kind of Ottoman, like Osmin.) McVicar shows us a pasha who’s a long way from the ageing, domineering despot you might imagine. The first time we see him, he rushes on in boyish delight on his way back from an excursion, whirling a startled Konstanze in his arms. He runs a well-ordered household; his door is surrounded by an eager group of petitioners hoping to benefit from his educated patronage; and his wives and children love him. McVicar has a giggling throng of children rush on and playfully mob their father on his return; a scene which gives us a greater sense of the kind of life Konstanze is being invited to join: a prosperous, polygamous but nevertheless loving household. And then of course, at the end, we see the true measure of the man: noble and gracious beyond the call of duty, and willing to sacrifice his own desires for the happiness of others.

In short, based on this production, I couldn’t quite understand Konstanze’s preference for loyal-but-bland Belmonte. And – let’s not be disingenuous – it’s not only due to Selim’s many virtues. McVicar makes full use of Frank Saurel (Selim)’s brooding good looks, giving us the frequent feeling that Konstanze herself is on the brink of succumbing. Her head, we intuit, is firmly set on returning home to Belmonte; but her heart, seduced by this sensual, powerful, commanding lover, is beginning to lean in another direction. Just in case anyone in the audience was still unconvinced, McVicar turns the Act 2 scene between Selim and Konstanze into an erotically-charged bedroom scene that trembles on the edge of outright violence. For good measure, he has Saurel striding around shirtless for most of it. This, I must confess, was one of the sections that one could certainly appreciate more fully on the broadcast rather than from a rather precarious position at the Albert Hall.

Generally speaking, it is a very aesthetically pleasing production. The version I saw at the Proms lacked the gorgeous sets at Glyndebourne, with latticed windows and beautiful brick arches, and a glittering expanse of sea beyond. But the costumes did make it up to London. And ohhhh the costumes! Belmonte arrives in Grand Tour gear: a frock coat and breeches with a long banyan-style robe worn over the top with a straw hat; Konstanze is in a gorgeous silk gown; Blonde in a corsetted dress and vividly striped stockings. In the final act, both women change into harem pants and blouses, which Konstanze sets off with a rather pretty brocade-trimmed bolero. Osmin prowls around like the offspring of Obelix and a misplaced Viking, with straggling yellow hair and beard; the Pasha’s wives are in a rainbow of Eastern fashions as if they’ve just stepped out of Liotard’s studio. And Selim himself moves from Western-style army uniform to a flowing Turkish robe and then, in the final act, a long tunic and belt. Oh, and there were scimitars, I’m pleased to report. I just love the pictorial flair of McVicar’s productions; his Giulio Cesare was the same, with a superb sense of light, setting and costume.

I haven’t mentioned the singing or the music, have I? Oops. That’s probably telling, actually: for me, as a non-expert, this felt very much like a play and I found myself listening to it as such. But the music was delightful, performed with great energy by the Orchestra of the Age of Enlightenment under the baton of Robin Ticciati. This was the kind of vivacious Mozart that simply sparkles off the ears, and the overture brimmed with panache. The star of the singing was Sally Matthews, playing Konstanze, whose wonderfully resonant and agile soprano tackled these ‘too many notes’ with aplomb. For me her highlight was the Act 2 aria Martern aller Arten, a splendidly defiant rendition.

As her Belmonte, Edgaras Montvidas sang with a melodious tenor that lent towards the low end of the scale, as refined and dignified as one could wish of a Spanish grandee. The problem is, though, that neither of these characters really comes across as being particularly interesting – the librettists’ fault, I fear. Konstanze seems to have little more than one expression (alarm mitigated by impermissible desire), and that was only emphasised by the fact that Matthews was often acting opposite Saurel, who is an actor as opposed to a singer and therefore, I must say, performed with an intensity of conviction that was far above anyone else on the stage. Having said that, acting isn’t just about emotion: I couldn’t help but look forward to the comic scenes between Blonde (Mari Eriksmoen), Osmin (Tobias Kehrer) and Pedrillo (Brenden Patrick Gunnell). Usually comic characters drive me up the wall, but these three were an unfailing delight. Their flair, timing and sheer genius at slapstick were simply wonderful and offered a much-needed respite from all the angst going on between the more high-born characters.

All in all, this was a real treat. I think I enjoyed it so much because of its strangely hybrid nature: half play, half opera. (Perhaps pure opera buffs might not be so enthusiastic: it’s certainly something to watch rather than just listen to.) I wish I’d seen it live at Glyndebourne, because I feel I missed out on so much of the atmosphere by seeing it without the sets, but at least I’ve seen the broadcast and that makes up for it. One thing I did notice – and this might be my memory playing up – is that there seemed to be much more recitative in the Proms performance than in the broadcast I saw, where certain bits seem to have been cut.

Update: To my delight, Glyndebourne have released the performance on DVD and Blu-ray. It’s great to know that their stunning productions can be available even to those of us who can’t afford to go in person; and of course it affords me the chance to study Pasha Selim’s character arc in further detail. Ahem.

The staging of the opening scene: McVicar at his simplest and most sublime

Konstanze (Sally Matthews) ‘resisting’ Selim (Franck Saurel). No, it doesn’t look like that to me either

7 thoughts on “The Abduction from the Seraglio (1782): Wolfgang Amadeus Mozart”