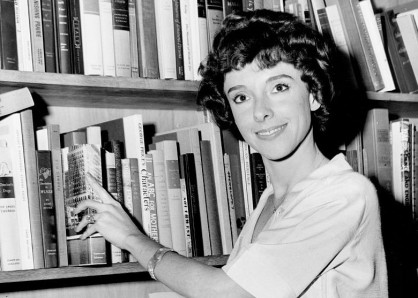 The easiest way I can describe this book, which follows four young women working in a New York publishing house in the early 1950s, is to ask you to think of Sex and the City crossed with Mad Men. With that description in mind you might be tempted to write it off as sugary vintage froth: a feast of twin-sets, cocktails and giggling bespectacled secretaries called Mary-Jane or Betty-Ann. But you’d be doing it an injustice. First published in 1958, this novel was written before the period had a chance to be romanticised, when the author herself had similar experiences fresh in her mind. It’s darker, shrewder and considerably more rewarding than you might expect.

At the beginning of 1952 Caroline Bender arrives for her first day at Fabian Publications, thrilled by the possibilities opening out before her. She’s still reeling from the end of her engagement to Eddie, the love of her life, and she’s come to New York seeking something different. Dazzled by the confident, capable-looking working girls she sees around her, she wants to become one of them, wearing her success like an armour to shield her heart from more disappointments. This novel follows Caroline, and three other girls at Fabian, over the next three years as they weigh up priorities, carve out careers, fall in love (or not) and realise that schoolgirl dreams mean nothing in the big city.

Sensible and pragmatic, Caroline hopes to show her quality to Fabian and dreams of one day becoming an editor. As she claws her way up the professional ladder, she endures dull blind dates foisted upon her by friends of the family, while growing increasingly frustrated by her inability to find a man who moves and challenges her. Barbara Lemont married too young and is now divorced, living in modest circumstances with her baby daughter and disengaged mother, quietly working away at the job she loves and wondering whether she will ever find a man willing to take on the challenge of a ready-made family. Pretty, bubbly April Morrison is too naive for the wiles of New York and falls in love too easily, too flattered by the glamour of the young men around her to believe that their intentions can’t be honourable. And Gregg Adams, a bit-part actress, cultivates a knowing cynicism about the world but is inwardly just as vulnerable and in need of visible affection as anyone else.

Each of these four girls faces up in a very different way to the demands of big-city life. That life can be a jungle. There are plenty of older men who hope that, with their wives away in the country, they can enjoy a bit of fun with pretty employees. Then there are the younger men, dull and eager or brash and heartless, who offer an interchangeable parade of suitors. And last of all, there is one’s own company, the everlasting plague of any girl alone in a big city: emotional isolation, loneliness, and the fear of having somehow missed one’s chance.

Jaffe writes very simply and the book follows a gentle chronological round from season to season. It offers a vivid evocation of New York throughout the year, from the bitter cold of winter to the sweltering summers, and the ebb and flow of social seasons too: the cocktail parties, dinners and bars; country clubs and the few days of vacation;  and weekends at home with parents. In many ways it’s a love letter to the city and I was delighted that most of the book takes place in the one part of New York I do know, in the streets around Rockefeller Plaza and Radio City. But it’s deceptive. The title itself is knowing. Jaffe’s young characters are exploited by those they should be able to trust, and one of the disturbing undertones of the novel is the way that men constantly try to take advantage of women, seeing themselves as lords of the universe and the girls as so many silly pretty things to be seduced and casually put aside once they’ve made their conquest.

This isn’t new, of course – fiction’s been focusing on this for years – but Jaffe’s story has the quiet conviction of real life. And, to be fair to her male characters, there are good men among the cads: men worth waiting for; and men who are probably good, but are also misguided and insensitive; along with men who are so good that they offer no excitement whatsoever to the female psyche. For those who’ve watched Mad Men, that interplay between the sexes will feel very, very familiar: that sense of male entitlement and female calculation as to which sacrifices can be made without too much danger. Some of the girls seem very slow on the uptake, but I suppose Jaffe accurately represents the way in which we read too much into situations and impose our dreams on the realities that are actually there before us. And, although I’m not going to say anything that remotely counts as a spoiler, not all the endings can really be called happy, which adds to the sense that this is real life, not convenient fiction.

It was a far more sophisticated book than I expected, and although it does little more than focus on the romantic lives of these girls, it does so in a way that grips you. And there’s more. You realise, after a while, that there are still aspects of this life that feel very familiar. Which single working girl hasn’t felt once in a while that her parents would actually be relieved if she’d just get married and have children like all the other girls from her school? Which of us hasn’t had the sneaking feeling that somehow getting married is a kind of social validation – proof that we’re ‘wanted’? Most industries, I hope, now have executives who realise that their female staff are there for more than decoration, but I’ve seen some places where older attitudes are proving hard to shift. You might shrug this off: plenty has changed. We might take a little longer to grow up nowadays, 30 is the new 20 and people are more relaxed about sex, but essentially the tangle of emotions and worries felt by Caroline, Gregg, April and Barbara are still familiar to many single girls in modern London. Plus ça change…

2 thoughts on “The Best of Everything: Rona Jaffe”