Let’s establish the key fact first: Irving Finkel is a legend. Not only does he have one of the most impressive job titles at the British Museum (Assistant Keeper of Ancient Mesopotamian Script), but he can read cuneiform, made a replica of the Royal Game of Ur at the age of nine, and looks exactly as a curator should look. I’m resigned to the fact that, even if I spend my entire career wearing tweed and covered in dust – which, to be honest, happens quite a lot – I’m never going to look as much like a curator as Finkel. It’s all to do with the beard, I think.

Anyway. As our fields are so different, I’ve never actually spoken to him, but it’s generally accepted across the museum that he’s a bit awesome. And this is why. Not only has he discovered a cuneiform tablet giving the earliest evidence for the Great Flood, written a comic novel about a library, and a story about the Lewis Chessmen, but he’s also produced this gentle, humorous and utterly delightful modern fairytale.

King Darius (the Fourth) is having a hard time of it. His eldest son, Crown Prince Julius, is more interested in beetles than people, and wants nothing more than to study as an etymologist in Paris. His eldest daughter, Irene Natasha, has declared that she’s fed up of being a princess, and has gone off to London in the hope of becoming an artist. Darius can’t help feeling it’s perfectly reasonable that all his children should have the chance to do what they want – after all, he’s not planning to pop off anytime soon – but unfortunately his opinion isn’t shared by his formidable queen, Hephzibah. Conscious of duty and protocol and lineage, Hephizibah is determined to make Irene come back and concentrate on the things princesses are meant to be doing, like getting married to a suitable prince, so that her two sisters Helena and Guinevere can also be put on the marriage market. When the usual diplomatic missions fail, Hephizibah decides that only a direct royal order will serve, and the hapless Darius is dispatched incognito to London to bring home his errant daughter.

But Irene has no intention of going back. She’s found herself a little ground-floor flat and done it up with pictures and ornaments from Oxfam, and she’s perfectly happy in her new, simple life. Her days are spent reading poetry, writing her diary and sketching, interspersed with chats with her neighbour Belshazzar, the composer of inaudible music who lives upstairs. When her royal father turns up on her doorstep, her resolve never falters for a moment, and instead of exerting his parental authority, Darius finds himself instead spending many happy hours in junk shops and concert halls. Eventually he has no choice but to go home empty-handed (of a daughter, that is – he has entire trunks full of junk-shop purchases), to face Hephizibah’s wrath. And, when the irritated Queen declares she’ll go to London herself, Darius and his ministers must come up with a cunning plan to save Irene from such a fate. They find the perfect solution: they’ll commission a portrait of the Queen, which will require weeks of sittings and give Irene some breathing space. But who can they commission for such a grand and important picture? Perhaps a solution could come in the form of Irene’s new friend, the delectable Bartholomew – painter, self-imposed exile (like herself) and owner of his very own freezing garret?

When I bought this, I thought it was going to be a children’s book and would happily have read it anyway. While it would suit as a bedtime story for older children, I think it’s actually aimed much more at adults – at those of us who haven’t quite grown out of smart, heartwarming fairytales. I must stress that my opinion here isn’t remotely influenced by who Finkel is: as ever, I’m being completely honest. When the day comes that I can’t write honestly about a book because I know the author, or for any other reason, I simply won’t post on it. Here there are no fears on that score. The book is delicious, light and gently absurd: it sparkles like prosecco and many of the conversational exchanges are simply joyful, made all the funnier by Finkel’s absolutely deadpan writing. Many of them are too long to quote here, but here’s a little section to give you a flavour of the irresistible style. Irene and Bartholomew are on a day out to visit the Monument and are making their way up the long winding staircase:

‘Not much further, I hope,’ said the Princess over her shoulder. ‘So far the
view is rather plain and monotonous and I am beginning to feel dizzy.’
‘Should we stop for elevenses?’ asked Bartholomew, solicitously.
‘The manuals suggest that we should keep going. If you stop when you
feel sleepy you know nothing until wet-nosed St Bernards dig you out, days later.’
‘It is fortunate that your training has been so thorough, as I completely
forgot to pack oxygen bottles.’
‘Slack of you, but I probably have one or two in my bag.’
They continued upwards.
‘I think I see light ahead,’ ventured Bartholomew.
‘Probably a fall of snow. We may have to bivouac.’

This is the kind of comfort book I love, a sort of cuddly blanket for the soul against the trials of everyday life. It has hints of Greenery Street and Miss Pettigrew Lives For a Day, and shades of the dysfunctional royal family in The Slipper and the Rose. I could talk about the themes of freedom and free will, but that would be to take the book more seriously than it takes itself. I don’t like to use the word ‘whimsy’, but if you strip away the twee undertones and focus on the qualities of charm and quirkiness, it’s a word that’s eminently suited to this little story. Illustrated by naive little drawings by Jenny Kallin, it’s quite simply a little spritz of joy. 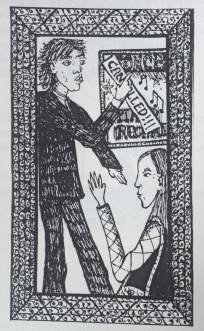