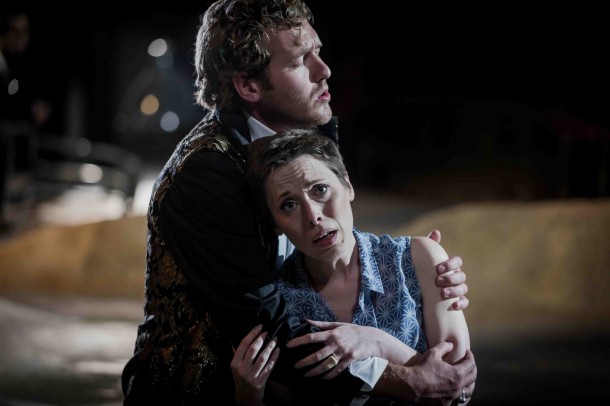 This is another post from the deepest, darkest depths of the drafts folder, as you can see from the date I saw this opera. Admittedly there’s limited point in posting on something more than a year after I saw it, but the post was almost complete and it would be a shame not to use it. Besides, it can still be interesting to see how different productions approach the same opera. And Trinity Laban’s performance at Blackheath Halls was a particularly intriguing choice last summer, because only eight months earlier we’d had another, much higher profile Idomeneo in London, which hadn’t exactly received rave reviews. It was a brave decision to put on another version of this challenging opera, so soon after it had come back to bite the team at Covent Garden.

This was, however, a very different beast from the Royal Opera House’s production. It was a community opera, which means that professional singers performed alongside a large number of people from the local area and children from the surrounding schools. In principle, it’s a wonderful and laudable idea. I can’t think of a better way to introduce children to opera and to break down the assumption that it’s ‘not for them’. And it’s a wonderful way to engage a broader community who’ll come to see the show because their friends and families are in it. Judging from the comments I overheard, there were quite a few people who’d never been to anything like this before, and I think it’s great they’d decided to take the plunge and come along. Indeed, I think they’re terribly brave, because if Idomeneo had been my first opera I’m not sure I would have caught the bug. It’s not an easy one. But, although the principle is commendable, it’s not the easiest kind of production to watch as an audience member. More on that in a moment.

If you don’t know the story of Idomeneo, then I refer you to my post on the Royal Opera House version from 2014. There are two further important differences between that production and Trinity Laban’s opera. First, Trinity have chosen Mozart’s revised score, which transposes the Idamante role down to a tenor register. Secondly, there is no shark; although there is an awful lot of sand, some vomiting of blood, and attempted child sacrifice (nothing like making the primary school kids really feel part of it, hmm?). And, in the interests of total honesty, after seeing these two productions I’m just not sure that I’m all that fond of the opera itself: it strikes me as an incredibly difficult piece to do well.

There were two particularly strong singers in the cast: Rebecca Bottone made a fragile, pure Ilia, who strives to use her privileged status to protect her persecuted Trojan countrymen. Pixie-cropped and wide-eyed, she conveyed a remarkable, girl-next-door wholesomeness. When the curtain (metaphorically) rose on the second half, we found her sitting on the beach surrounded by children, with one little girl on her lap, and I half-expected her to start singing about mittens and kittens and brown paper packages tied up with string: she had that quality to her. This was the first time I’d heard her in the flesh, although I knew her voice from the recording of Arne’s Artaxerxes, where she played Semira. She has the perfect voice for naive innocence: the most beautiful soprano, crisp and clear as a bell. Every word was audible; she turned out some gorgeous, shimmering notes and you could tell that not only was she a consummate professional, but she was intimately used to this kind of music.

Ilia’s romantic rival Elettra, was sung by Kirstin Sharpin in a remarkable performance full of domineering grandeur and incipient mental collapse. This Elettra lurked in corners while others sang, scrabbling nervously at her hands. She wore lace gloves as if she had eczema and was trying to stop scratching, but it was clearly more of a psychological itch. Her furious arias were a delight. Sharpin is listed as a soprano, but next to Bottone she had a more mezzo-ish cast to her voice: rich and powerful and thrillingly dramatic. According to her biography, she sings a lot of Wagner: I’m not remotely surprised. Teetering around in heels, trapped in a state of constant waiting, this Elettra was actually (to me) a rather sympathetic figure. She was short-tempered and unstable, but you could understand her rage. She’s come to this wretched island in the hope of winning Idamante’s heart and suddenly he’s gone and fallen in love with some ragged little refugee! I had some intellectual issues with Elettra’s fate in the opera, but I’ll come back to that. Suffice it to say that when Sharpin started singing, I sat up and thought, ‘Oh good!’

Of the men, the strongest was Mark Wilde as Idomeneo. He played the king as a tormented, sympathetic figure, whose long absence is to blame for the tyrannical regime which has arisen on Crete, and who wrestles with his fate without quite having the courage to do anything about it. His gentle tenor was perfectly suited to the music and, again, he sang with the self-assurance of someone who is used to Baroque conventions. I found him very enjoyable to listen to. Funnily enough the next most striking male voice was Pauls Putnins, who had only a very brief performance as the Voice of Poseidon at the end, but who had the most fabulous bass-baritone voice, full of warmth and colour. 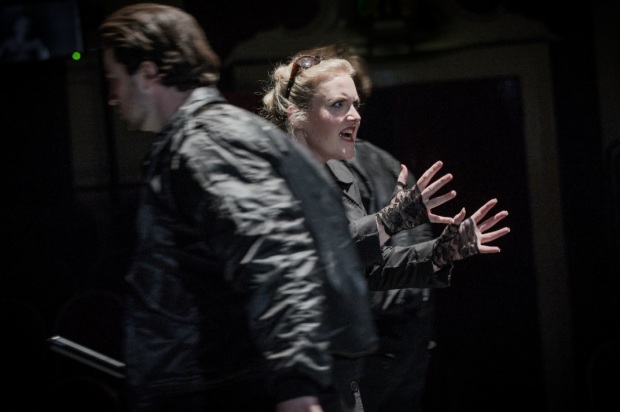 William Johnston Davies as Arbace had a tough job because his role was merged with that of the High Priest and consequently made no sense. You can’t have Arbace playing the good, loyal friend at one point and fervently urging sacrifice and whipping up the people five minutes later. It undermines both characters and makes the whole thing very confusing. Despite this unwise creative decision, Davies did well, but I didn’t really get a strong impression of his voice. His one big aria seemed to have been cut, so we only really got a chance to hear him during the recitatives. For all that his physical performance was very impressive: lanky and threatening, this Arbace is the leader of the truncheon-toting gangs who keep order on the island, and he proved to be very ominous as a figure of religious authority. I’d have liked to hear him sing a bit more though.

There’s still a way to go with Idamante though. I liked a tenor Idamante better than I expected (Mozart transposed the role himself, of course, so it’s just as ‘original’ as the version pitched for a castrato), but I wasn’t quite convinced by Sam Furness. I don’t want to sound hard: he looked great in the role, striding around with an unruly mop of blond hair in a gold brocade frock coat, and he has a nice voice. I like its warmth and its general feel, but in the first act especially I didn’t feel as if he had that broad a range. Things got a little better in the second half, but it’s strange, isn’t it? I felt exactly the same about Fagioli when he sang the role at the Royal Opera House and I wonder if actually it’s not down to the singers at all but to something with this particular role, which forces you to spend too much time in your middle range. It just didn’t bring out much colour in Furness’s voice. My main concern, though, was that he didn’t seem entirely at ease with the music: like it or not, Idomeneo is still Baroque and he struggled with the coloratura, because he didn’t have that clipped, rapid waterfall quality to his notes. He sounds as if he’d be entirely at home with belcanto, but this didn’t seem to be his cup of tea.

We wondered if Idomeneo had been chosen because it allows for several big crowd scenes. The production team were clearly keen to get as many people as possible onto the stage and that was an issue. The seats weren’t particularly raised above the stage, which was rectangular and roughly the size of a tennis court. Since the opera was performed in the round, this meant that there were long stretches of time when the singers were a long way away (we ended up at one end, of course. My fault, that). 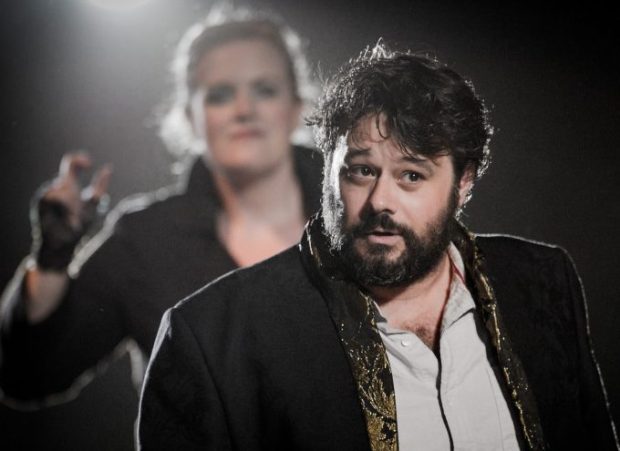 It was frustrating when our view was blocked on numerous occasions by groups of nurses or lifeboatmen or distressed civilians, who were presumably marshalled onto the stage to add drama, but merely ended up standing in front of the audience. If you’re going to attempt something on this scale, you’ve got to find a way which doesn’t result in whole segments of the auditorium being unable to see certain scenes. Part of the problem, for me, was that many of these people didn’t seem to be doing anything: it was obviously an attempt to get as many of the community involved as possible. Again, a commendable aim, but not one that actually worked in choreographic terms. It could have been better thought out.

The aesthetic, as seems to be the norm for Idomeneo nowadays (with one or two honourable exceptions), was modern, pretty bleak and dark: refugee camp via interrogation chamber, with added sand. The story is already pretty weighty and this design just made it feel heavier, along with a particularly grim ending (spoilers ahead).

Correct me if I’m wrong, but nobody is meant to die at the end of Idomeneo. The Royal Opera took the dark step of having Idomeneo blinded and driven out of his mind – a physical expression of his loss of power – which in some ways worked quite well, underlining the very psychologically uncomfortable final scene. Here at Blackheath Halls, Elettra’s final angry aria finishes with her actually stabbing herself and sprawling across the altar: Poseidon gets his blood after all. I actively disliked this decision. Nothing comes of her death: her body is just rather apologetically covered with tarpaulin and then we get on with the final chorus about how everything is going to be lovely and sunny now, while everyone just seems to ignore the fact that the princess of Mycenae has just killed herself (aren’t there going to be major political implications of that?).

A puzzling thing, therefore. The concept had a few problems and, for all that I approve of getting the community involved, this could have been thought out a little more. Ticket prices were similar to those I’d pay elsewhere, and it was a bit frustrating to miss swathes of the action. However, it offered a welcome contrast to Covent Garden’s Idomeneo and featured very strong performances from the two female leads. I wish I’d been able to see Garsington Opera’s Idomeneo, which has just finished, in order to compare yet another take on the story, but alas, I can only do so much…

Children wait for a presentation of red roses