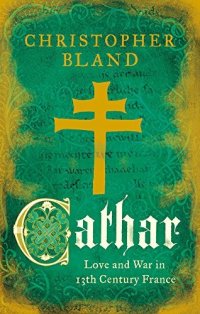 I asked to review Cathar with a hint of trepidation. In recent historical fiction the Cathars, like the Knights Templar, have been appropriated by the religious-conspiracy crowd and I wasn’t quite sure what I was letting myself in for. Fortunately I was pleasantly surprised: there were no secret societies (beyond Catharism itself) and no hint of the Grail. This is pure historical fiction. More than, there’s a lot of genuine history here: it reintroduced me to a crowd of real-life figures whom I last encountered during my history degree in Emmanuel Le Roy Ladurie’s magisterial study of Montaillou.

The story opens in the mid-13th century in Southern France. Francois de Beaufort is the son of a modest knight, whose equally modest stronghold in Languedoc falls within the influence of the powerful lord Bernard de Roqueville. They, like the vast majority of their countrymen, are Cathars, believers in the fundamental duality of the world and the inferiority of the visible world (created by the devil) to that of eternal life (created by God). Since the Albigensian Crusade some decades earlier, the Catholic Church has taken great pains to stamp out Catharism as an unorthodox sect and the men of Languedoc have been forced to give the show of observing Catholic rites, while cherishing their true faith in secret. The Church is not to be fooled, however. When Bernard’s cattle are forcibly requisitioned in lieu of outstanding tithes by the Church in Toulouse, he retaliates by organising an attack on two Inquisitors at Avignonet. When Francois’s father is fatally wounded in the ambush, he moves to Roqueville. Here he learns the duties and skills of knighthood, splitting his days between training with his friend Etienne and mooning over Bernard’s beautiful wife Blanche.

But the events at Avignonet have consequences, and the golden days of Francois’s training soon fade away as a mighty force marches into the valley from Toulouse and he is required to put his military studies into practice. But the siege is dismally brief. Marked in body and spirit by Roqueville’s surrender, Francois is selected as the leader of the miserable group of surviving knights, and ordered to lead them to Montsegur. Mutilated and humiliated, they are to serve as warnings to the Cathars of the Languedoc that the might of the Church cannot be resisted, and that it is better to recant than to burn. But the Inquisition and the Church haven’t counted on the stubbornness of these southerners, who are very far from being ground down. Driven by love as well as faith, Francois will find himself at the very heart of the storm, where blood and fire will test his beliefs to the utmost.

It’s a promising subject, but there are some stylistic issues which prevent the book being quite as engaging as it could have been. Others may disagree with me, but I took against Bland’s decision to tell the story in multiple first-person viewpoints, often jumping to a new narrator with each chapter. With each switch of viewpoint, the new narrator had a frustrating habit of recounting what the last narrator had already told us, sometimes borrowing exactly the same words or phrasing, before moving on to a fresh part of the story. This held up the momentum of the story and I felt there could have been a more subtle and successful way to bind these chapters together. I also wonder why Bland decided not to go with a third-person viewpoint, which would have made these issues less noticeable, rather than opting for a rather odd kind of omniscient first-person view which, for me, didn’t work. Jumping from one narrator to the next also meant that we didn’t have much time to really build relationships with these characters, despite seeing events through their eyes. By the end of the book, the character I found most interesting was actually Blanche, who had been forced to challenge her faith and yet found a way to accept her new life.

Bland has obviously done a lot of careful research, however. It’s been some years since I read Montaillou, although it’s one of my BA set texts that I’ve kept, with the full intention of rereading it. Checking the index now, I see that many of the figures from Ladurie’s study appear in Bland’s book: the Clergue and Authie brothers, the Benets and Beatrice de Planissoles, to name just a few, although Beatrice’s story has been tweaked to make it more satisfying for the reader. I’m less familiar with the broader events of the time, but the ambush at Avignonet happened (in 1242) as did the siege of Montsegur (1243-44). My ears had pricked up at this, as there’s no way that our hero Francois could have been a fighting man at the time of those events, and yet be no more than middle-aged at the time he knew the Clergues and Beatrice in Montaillou just after 1300. My protests were forestalled slightly by the author’s note, where Bland claims ‘the author’s prerogative to ignore the timeline’. As a historian, I tend to feel rather strict about keeping to timelines, but other readers may be more indulgent.

Generally speaking, this is a sound and evocative book about the anti-Cathar crusades in the south of France during the 13th century, and Francois makes a sympathetic hero. If you are interested in the period or in Catharism, it is certainly worth a read, and may well leave your appetite whetted for further books on the subject. I’m certainly going to have to add Montaillou to my pile of books ‘to read soon’ and I’d be interested to know if anyone’s come across any other straight historical fiction about this period – that is, fiction which doesn’t involve reincarnation or the Holy Grail (and I have already read Kate Mosse). I’d love some recommendations.