Apologies to all the authors I wasn’t able to show in the photo above, but it seemed a good idea to stick with Ellen Kushner. This ambitious project takes place in her world after all, unfurling the intrigues and romances that act as a prequel to Swordspoint. Here we see the city in all its familiar shades, from the dangerous alleyways of Riverside thick with thieves, rogues and swordsmen, to the elegant decadence of the Hill, where fashions, plots and chocolate are the order of the day.

Three women, from three very different worlds, are about to find that their fates are merged. One of these women is Diane, Duchess of Tremontaine, who surveys the city from her bower tucked at the very top of the noblemen’s enclave on the Hill. She is the trendsetter of the city, the dictator of the fashionable and the passé, and her choice of gown can set the style for a summer. But Diane isn’t as placid as she would seem to a chance admirer. The Tremontaine fortunes are weighed down with loans and obligations, and as she tots up figures, Diane realises that something must be done to save them from utter ruin. Since her good-natured, scholarly husband William won’t step up to the mark, she must do it. And it isn’t only the Tremontaine secrets that Diane fears becoming public knowledge. Someone has dredged up a secret about her own past: something that could destroy everything. Diane is not the kind of woman to sit back and let them do it.

In another part of town, a young arrival is adjusting to the city’s dizzying possibilities. Micah, a humble country girl, comes to town to help her cousin sell their family’s crops at the market, even though he makes her dress as a boy to keep her safe. But her heart doesn’t lie in farming. Her passion is numbers and, when she falls in with a group of students at the University (who take her for a boy), Micah suddenly realises that the world holds unimaginable possibilities for learning. And, to her delight, her new student friend Rafe thinks that her gift might just help to prove his new scientific theory about the heliocentrism of the universe. But Micah’s passionate enquiries into maths risk becoming far more dangerous than either she or Rafe could have anticipated.

And last, but not least, Ixkaab Balam arrives from exotic climes at her family’s trading compound, which provides the city with its favourite gluttony: chocolate. Exiled from her homeland due to an unfortunate incident, Kaab is tasked with making herself useful to her aunt and uncle in the city. But she is bright and impetuous and trained to fight and, much as she loves her family, she doesn’t intend to spend the rest of her days modestly bustling around within the compound. Instead, Kaab sets out into the city with a thirst for love and knowledge. She finds the first, in a beautiful redhead named Tess, and she also finds the second, although it doesn’t come cheap. For Kaab finds herself being drawn into a remarkable web of secrets and deceit. What links Tess’s protector Ben with the Tremontaine household on the hill? What if Kaab’s clever little friend Micah succeeds in deciphering the navigational secrets that will injure the Balam monopoly on chocolate? And why is the Duchess of Tremontaine suddenly so interested in entering a commercial partnership with Kaab’s family? Something is up in the city and Kaab, self-made spy and student swordswoman, is determined to solve the mystery.

Tremontaine is far from being a conventional novel. It was released through Serial Box, a website that releases new chapters of a novel weekly. Depending on your point of view, this either revolutionises literature (by emulating the week-by-week release schedule of the latest hit TV show) or, alternatively, goes back to the fine traditions of Victorian novels (being serialised in weekly magazines, with eager readers left itching for the next instalment). Either way, it’s a fun project and Kushner hasn’t embarked on the ride alone, but has brought along a team of fellow writers to create something which is half-novel and half-game of consequences, with each author taking up the baton from the one before. I’d love to know whether the plot was mapped out beforehand or whether everyone had carte blanche to innovate and add plot twists within their own chapter.

It’s a fun experiment, and the book is mainly notable for that experimental quality. It’s certainly well-done, no question of that, but the serialised nature calls for a certain degree of ‘previously on…!’ repetition in the opening paragraphs of each chapter, and the writers do have subtly different quirks and voices. I hate to point fingers but I think Joel Derfner was responsible for introducing the endearment ‘pigeon’, which Joshua uses to Rafe and which made my teeth grate every single time it appeared. Unfortunately, in Derfner’s chapter that was every time Joshua spoke to Rafe, unless it was replaced with ‘pet’; fortunately other authors were more sparing. Apart from said grating of teeth, however, I felt that all the authors (Derfner included) did a remarkably good job of working within a broader similar style. Some were more adventurous, cutting back and forth between characters in short, snappy scenes; others preferred to let the story unwind in a more leisurely fashion, focusing on one character for several pages.

I suspect most readers will come to this having already read Swordspoint, although it requires no previous knowledge and would work perfectly well for the uninitiated. If you are new to Kushner’s city, it’s worth pointing out that her world has very a marked queer perspective (there’s only one happy heterosexual couple in the entire thing, off the top of my head), which is a refreshing change from much fantasy writing, but might come as a surprise to the unsuspecting. It’s almost, to my delight, a very feminist story, in which women hold the power, display ambition, prove their brilliance and pull the strings. Micah alone, with her fervent love of maths (and a dread of social situations that suggests she’s somewhere on the autistic spectrum) would have made the book a delight.

If you’re one of the many fans of Swordspoint, you’re unlikely to be able to resist exploring the city once again in this prequel. And, if you are a fan and haven’t read it yet, you’d better hurry, because Season 2 (i.e. the next novel) is going to be out next year. If you’re a newcomer to Kushner’s world, however, I’d recommend starting elsewhere: Swordspoint itself, or perhaps the even more wonderful Privilege of the Sword, which holds a special place in my heart for its gloriously swashbuckling heroine.

See below for some examples of the stencilled cover art by Kathleen Jennings for each chapter. 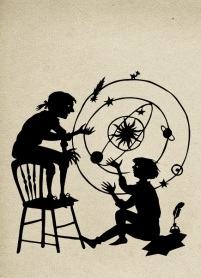