And so to the third instalment of Manda Scott’s Boudica quartet, which I’m eking out so as not to finish it too soon. Dreaming the Hound takes us deeper into the story of Breaca, the flame-haired warrior whose leadership against the invading legions has earned her the title of the Boudica, ‘bringer of victory’. It also follows the life that runs parallel to her own: that of her conflicted, troubled half-brother, once named Bán, and then Valerius, who served as decurion of the Thracian cavalry under the aegis of Rome and is now, unwillingly, back among his own people.

I suppose, in some ways, that this novel acts as the fire though which the characters must pass to be tempered and forged for their necessary roles. They have both had moments of pain and sacrifice in the earlier two books – Valerius in particular – but it’s only now that both of them really have to come to terms with who they are and what that means for them. For Breaca, the book opens with a programme of methodical, solitary revenge for the loss of Caradoc. Ranging the wild hillsides alone, she cuts down stray Romans from the outlying camps, sowing fear among the troops and weakening their resolve. This life suits her, but in adopting it she risks forgetting her duties, as Warrior of Mona and, more importantly, as a mother. Her little daughter Graine hardly knows her, and Breaca slowly comes to realise that, in clinging to anger about the past, she is neglecting the possibility to shape the future.

Breaca is responsible for something larger than herself and, when her half-sister Silla dies, she realises that her duty is to take Silla’s place, as queen of the Eceni and wife to Prasutagos, client-king of Rome. Hiding in plain sight as Prasutagos’ new wife, Breaca is able to enter the Roman capital at Camulodunum, where she learns more about these Latin invaders and, unexpectedly, meets an old friend. But her new visibility brings danger too. As she quietly begins to rouse her dispirited people, and to gather the beginnings of a war band, events in Rome threaten the precarious peace. Nero is now Emperor, ruled by avaricious ministers and determined to squeeze every last drop of profit from Britannia. Stripped of their land, their customs and their history, Breaca’s people are now to face the ultimate insult: the prospect of losing what little they have left.

Across the sea in Hibernia, at a safe distance from his sister’s wrath, Valerius makes a living as a smith, trying to keep a balance between his commitment to the god Mithras and to his older, more ingrained loyalties to Nemain and to his ancestors. When his companion Bellos is wounded, Valerius is finally motivated to make the journey he would never have ventured otherwise: for the sake of another, he travels to Mona to ask for help. Help comes, but hatred too, for Valerius – and his demon of a warhorse – have become dark fables to the British. As the months pass, Valerius must come to terms with himself – both his parentage and his faith – and decide where his future loyalties should lie. There may yet be a way in which he can knit together past and future and make himself whole.

Scott’s writing continues to be elegiac and haunting; the characters feel like real, tormented, anxious human beings; and yet, despite the grace of the book, she can pull some harrowing scenes out of the bag when she wishes. This is a world steeped in death and brutality, and we’re never allowed to forget it. But it’s also a world steeped in mystery and mysticism, and that for me was the most noticeable difference between this and the earlier books. In the first two novels, I got the impression that dreamers and dreaming were part of the culture and the belief system, but – if I can phrase it like this – it was what the characters believed, rather than what the author and readers were meant to believe. The visions of the long-nights, I could tell myself, were the product of minds honed to see such things and interpret them as totems. Dreamers, in a trance, might believe they see things that exist only in their minds.

But in this book, it becomes clearer that Scott wants us to believe that the ancestors really do speak from beyond the grave and that ghosts really do wander the land until they’re sent home by the dreamers. It’s a subtle shift but for me it took the book further away from historical fiction and more into fantasy. That’s not a distinction that I particularly mind – though others may – but it did, ironically, make the book less powerful for me. If you know that the author is happy to employ otherworldly forces, rather than relying purely on the characters’ own human capabilities, there’s always the possibility of a deus ex machina moment. So far Scott hasn’t resorted to that, and I hope she won’t. For my part, I’d have preferred the less overt spirituality of the earlier books. I wonder whether the change is related to the fact that this is also the first book where Scott’s own ‘contemporary dreaming workshops’ are advertised at the back. Out of curiosity, I went on her website and read more about the principles of this ‘contemporary shamanism’. In principle it all sounds very interesting, even if it’s not something that fits with my own understanding of the world, but it would be a shame if the theories taught in Scott’s classes grew to undermine the agency of her strong and profoundly appealing characters.

That was something that had to be said, but I’m still thoroughly enjoying these books. Scott’s world, for all its brutality, is full of humanity and generosity. Furthermore, she evokes all the beauty and magnificence of this country’s wilderness. To read her books is to long to walk in the Highlands and to watch kites or ospreys soaring on the winds; or sit on a sheltered hillside and watch a warm sunrise creep across the heather, burning off the dew; or to see brooks and waterfalls and the vast empty joy of northern skies. I’ll be saving the fourth and final book for later in the year because, much as I want to find out what happens, I’ll be sorry when there’s  no more to read.

I can’t remember if I’ve mentioned Hild in connection with these books before, but it occurs to me again: if you love these, you’ll love Hild too.

Last in this series – Dreaming the Bull

Next in this series – Dreaming the Serpent Spear

And here is the selection of designs for this book’s Cover Feature: 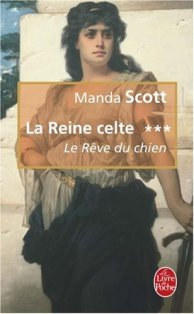