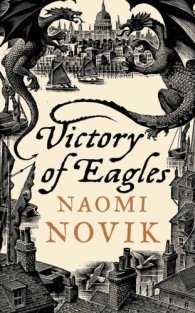 Last weekend, at the Dorothy Dunnett Day meeting in London, I was chatting to Janet about Temeraire. She mentioned the central ‘moral dilemma’ of the series, which would have an effect on all the books that followed and, at the time, I couldn’t quite remember whether or not I’d reached this point. After all, I read the fourth Temeraire book in April 2014 and quite a lot has happened since then. However, I’d only read the first few pages of Victory of Eagles before I realised, with a jolt, what Janet had been talking about. Of course. The cure…

When we last saw our two heroes, they had been faced with a terrible choice between loyalty and compassion. They realised, at the end of Empire of Ivory, that the British government had tried to infect Napoleon’s French dragons with a plague, which would doubtless cause hundreds of deaths and perhaps spread far beyond France’s borders across Europe. Knowing this, should Laurence and Temeraire have remained faithful to their country or, from simple humanity, secretly taken the cure across to France? They chose the path of kindness, and as this book opens we see that kindness has received its usual reward from power. Temeraire has been banished to the bleak breeding grounds in Wales, while Laurence languishes somewhere unknown, condemned to death as a traitor and kept alive only as a hostage for Temeraire’s good behaviour.

A momentary impulse towards generosity has branded Laurence a traitor for life, stripped of his rank, his honour and his family’s regard. Worse still, his failure to check Napoleon’s aerial corps facilitates something that should never have happened: the successful French invasion of England. As tricolour flags flutter over Dover, and Napoleon’s marshals scour the English countryside, Laurence and Temeraire find that even traitors can be tolerated in a time of national emergency. Rallying Temeraire’s companions from the breeding grounds, they embark on a daring and dashing effort to drive Napoleon back beyond the Channel once and for all.

One of the things I’ve been enjoying most about Novik’s series is her deft touch with real history. Her Nelson survived the Battle of Trafalgar and so must meet his fate in a different fashion; her Lady Hamilton serves as a society hostess and spy in French-occupied London; and the future Duke of Wellington finds himself dealing with, not Waterloo, but a company full of over-eager, well-meaning and yet completely uncontrollable dragons. Her handling of the language remains as fine as ever, with the same kind of period grace and style that you find in Patrick O’Brian. The books are a blissful joy to read, best savoured at intervals (although two-and-a-half years between instalments is probably just that bit too long an interval) and are just the kind of warm, cosy adventures that fit well with these creeping dark nights.

I do plan on reading Book VI before summer 2019, so watch this space for more Temeraire adventures very soon, as Laurence and Temeraire find their fate leading them to yet another distant corner of the world.

Last in this series: Empire of Ivory

Next in this series: Tongues of Serpents