In June 2015, when we met Philippe Jaroussky after his Festival Concert in Halle, we asked when he’d next be coming to London. His answer was non-committal and typically modest: he wasn’t sure; he didn’t know if the English were all that fond of what he did. But I hope Thursday’s concert at the Wigmore Hall showed that there’s hope for us yet. The recital had sold out months ago and my brilliant friend only managed to secure tickets by incessantly badgering the box office for returns. The hall was stuffed to the gunwales; the atmosphere was palpable; and yet there were times you could have heard the smallest of pins drop. Refined, elegiac and utterly professional, Jaroussky showed us all once again why he remains the hottest countertenor ticket of all.

The programme was devoted to sacred and instrumental music by Telemann and Bach, in recognition of Jaroussky’s new CD. Everyone knows who Bach was, but Telemann is less familiar nowadays: he was a contemporary of Bach’s and, at the time, was considered far superior. As the programme pointed out, musical Bachs were ten-a-penny in Saxony around 1700, but there was only one Telemann. Being a complete heathen and Italophile, I’m not particularly well acquainted with either composer and, I confess, I find sacred music rather less exciting than stories of kings and emperors and tempests… but I had come willing to learn and be inspired. And of course, I had come for Jaroussky. I’ve said before that I don’t always admire his operatic efforts, but I’ve always felt that he’s an exquisite performer of sacred music. His Cum dederit from Vivaldi’s Nisi Dominus always sends a shiver down my spine, despite the heathenness previously mentioned.

The first half gave Telemann space to shine. Le Concert de la Loge began with his Overture burlesque in B flat major (TWV 55:B8, for those who note such things). Written in around 1720, it’s apparently based on a series of dances inspired by characters from the commedia dell’arte. I’m unable to judge which character was which simply from the music, but we began with a stately march, measured and graceful, which somehow felt more Germanic than Handel ever does. Something to do with its self-conscious grandeur, perhaps; but it was then undermined by the jaunty intrusion of violins, with lively harpsichord and oboe accompaniment. Towards the end of the piece, we returned to the elegant march and finished off with a cheerful movement in which the strings skirled around like falling autumn leaves. We didn’t hear the entire overture, but it was enough to give me a desire to hear more Telemann. 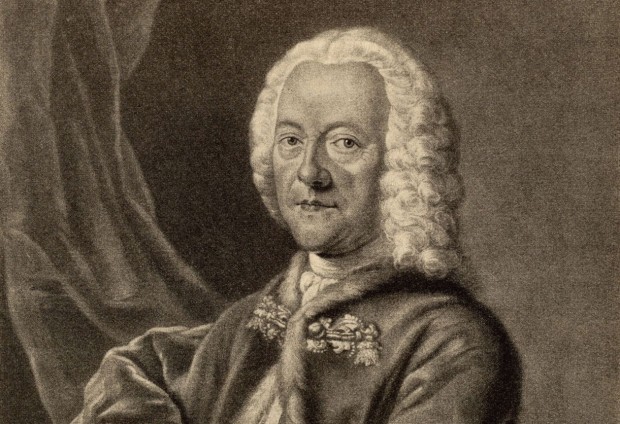 Jaroussky then rose from his chair for the first vocal piece: Telemann’s cantata Die stille Nacht (TWV 1:364). It’s worth taking a moment to point out that I didn’t really understand the purpose of a cantata until this recital: I hadn’t realised that poor Telemann had to come up with two cantatas per week for the church services in Hamburg, where they served as musical sermons, in a sense, focusing in on a particular gospel text to help the congregation to meditate on its inner meaning. Apparently Die stille Nacht takes us through the story of Christ in the Garden of Gethsemane, opening with a soft pitter-patter rhythm that made me think of soft rain in trees. The cantata moves between recitative – in which the singer contemplates Christ’s pain as if he is watching the scene – and arias – in which Christ speaks directly, as it were.

And so, first, we imagine the peaceful night, tonight rendered horrifying by Christ’s agonies in the garden. Jaroussky’s voice was dependably pure, riven with anguish and finishing the recitative on a raw cry to God. The first aria, ‘Ich bin betrübt bis in den Tod (‘I am saddened unto death’ – an upbeat lot, those Lutherans) was more melodic, but in a way I felt the heavier instrumentalisation took away from the crystalline grace of Jaroussky’s singing. I was almost glad when we returned to recitative and he sang almost unaccompanied, with just a touch of the organ. His voice is best heard ‘bare’ in this kind of setting, where the Wigmore’s acoustics warm and magnify it, making any adornment unnecessary. The pace smartened up for the next aria, Mein Vater! Wenn dir’s wohlgefällt (‘My Father! If it so please you’), which sounded almost jolly, with definite undertones of foot-tapping, which doesn’t quite suit the moment in which Christ begs for the cup to be passed from him… but whom I am to complain about a good tune?

In any case, it was short-lived, for in the next recitative the harpsichord and cello gently took over and we sank back into the gloom, which was highly suitable as it was all about agonies, blood and sacrifice. But all was not lost. The strings sang back into action for a delicious, hopeful finale in the aria Kommet her, ihr Menschenkinder (‘Come, you children of men’), which held out the possibility of redemption. Jaroussky even threw in a graceful fluttering of coloratura at the end. And his performance wasn’t simply vocal. He seemed infused with faith, which was very moving. In tragic moments, his face was suffused with the pain of one contemplating Christ’s suffering, while, at other times, he brightened with the lightness of one joyously convinced of forgiveness and resurrection.

Then back to the instrumental, with the Overture from Telemann’s St Matthew Passion, written for an Easter service. After the deeply felt cantata, this was perfectly pitched: elegant, sober and heartfelt. It cleared the air a little before the final cantata of the first half, again Telemann: Jesus liegt in letzten Zügen (TWV 1:983). Once I’d got over my brief confusion – apparently this wasn’t about Christ catching the last train – I savoured the ethereal, austere organ opening and the delicate strings and oboe. Jaroussky sang with many forlorn looks towards heaven, as one might expect: the singer is, after all, imagining Christ above him on the Cross, breathing his last. Again I felt his voice was at its best a cappella, which was proven in the first recitative, just because it was so simple. But then a violin, an oboe and the cello came in gently, brightening the mood a little ready for the second aria, Mein liebster Heiland (‘My beloved Saviour’); and things ended on a joyously hopeful note with the third and closing aria, Darauf freuet sich mein Geist (‘My spirit rejoices’), as the singer anticipates the glories of heaven.

So much for Telemann: after the interval, we were on to Bach. Just two pieces here: first, the Orchestral Suite No. 2 in B minor (BWV 1067). This was memorable chiefly for a splendid performance from the flautist Tami Krausz, who took over the central stand and acted as the soloist throughout. After the overture came a rondeau and then a sarabande, slow and languid, and full of lovelorn yearning. This dreaminess was banished by a lively bourrée, and then came a polonaise, immediately recognisable even to me with its military march, in which the flute performed a charming solo. Then a menuet, which brought us in from the parade ground to the ballroom, yet without losing the music’s sprightly edge, and finally a ‘badinerie’ (which I hadn’t heard of before), in which everything perked up and the flautist’s fingers were positively flying over the instrument. It was – slightly to my surprise – rather fun. I always think of Bach being terribly serious and Saxon, but it turns out that he had a merry edge to him after all.

The final item on the programme – and perhaps the highlight of the night – was Bach’s cantata Ich habe genug (BWV 82). I grinned when I read that it was originally written for bass, but Jaroussky wasn’t about to spring a register change on us: the cantata has been successfully amended for all sorts of voice types. Apparently it’s terribly famous but, as I said, I’m a heathen and this was the first time I’d heard it. Now, those opening lines, with Jaroussky’s clear voice wound about with the oboe like ivy round a rose, were lovely; but I didn’t really fall for it until the second aria, Schlummert ein, ihr matten Augen (‘Close in sleep, you weary eyes’). This was extremely pretty, with places for the voice to lightly rise and fall, and it was so gentle – ‘like a lullaby’, I’ve written, without even realising at the time that this is probably exactly what it’s meant to be. This was the most sublime moment of the cantata for me, even though I also enjoyed the third aria, Ich freue mich auf meinen Tod (‘I look forward to my death’). The title’s a bit morbid, I grant you, but the music definitely focuses on the ‘freue mich‘ rather than the ‘Tod‘ bit. This is where Jaroussky had hidden all of the coloratura for the evening and it was an exuberant conclusion to the programme, albeit ever so slightly over-composed in comparison to the rest.

The reception was rapturous, though without the foot-drumming, whistling and other chaos of some concerts – it just didn’t feel appropriate after such a programme. There were two encores, the first Telemann (an aria from Telemann’s St Matthew Passion) and then an aria from a Bach cantata, Freue dich, erlöste Schar, which was a veritable dance of a tune – as Jaroussky himself promised, a little light to chase away the darkness.

As in Halle, I simply must take a moment to acknowledge Jaroussky’s other qualities. It’d be ingenuous to pretend that some of these aren’t aesthetic. At thirty-eight, he still has a modest boyish beauty and, astonishingly, looked even younger than he did in Halle a year and a half ago. Again, I find myself wondering where he’s hidden his enchanted portrait. But the thing that strikes me even more forcibly than his beauty is his poise. Consider the differences between this recital and those of Max Cencic or Franco Fagioli. Of the three, Jaroussky is the most famous, the most consistent and the most unassuming. No flashy outfits; no gratuitous entrances and exits. On the contrary, he came on with the orchestra at the beginning of the first half, took a shy bow and settled himself on a chair in front of the organ until he was on. As in Halle, he gave the impression that he doesn’t see himself as the star attraction but simply as part of the team. And that humility is immensely appealing.

So am I converted? Well, I suspect Italian storm arias will still be my go-to music of choice, and Bach and Telemann will never steal my heart away from Vinci, Vivaldi and Handel, but I do appreciate them more now. I simply don’t know them very well and, if I’m going to be introduced to sacred music, I really can’t think of anyone better than Jaroussky to do it. I may remain ambivalent about his operatic roles, but this kind of music is absolutely made for him. What a privilege to be there on Thursday to witness this magic in person – so thanks again to my ticket-hunting friend. 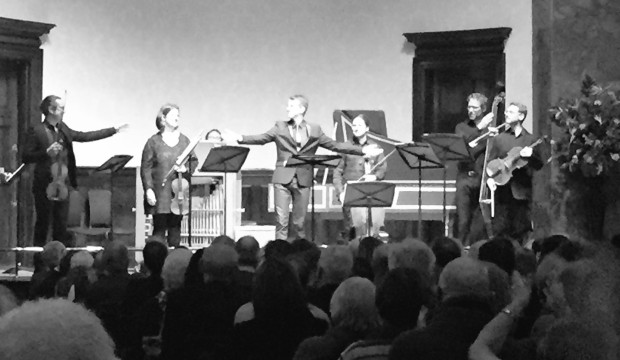