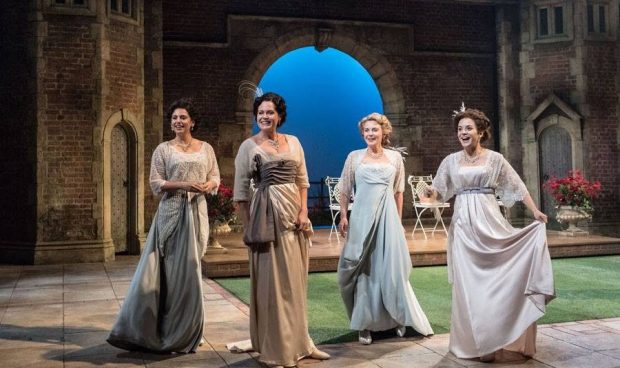 There are days when the whole world seems pitched against you. On Monday there was a Tube strike, it was pouring with rain and, too late, I found a hole in my boot. On arriving at the Haymarket, cold and grumpy and with a very wet sock, I was not disposed to be happy. But the RSC’s latest London transfer could charm a smile out of a stone. Two plays have come to town: Love’s Labour’s Lost and Much Ado About Nothing. Conceived as two halves of a pair, joined by a common spirit if not by the same characters, these plays unfold in a country house on either side of the First World War. Brimming with light and life, skirmishing lovers and rapier wit, they’re bubblier than a bottle of prosecco.

First up was Love’s Labour’s Lost. The plot is lightweight: an out-and-out romantic comedy, rather than the sharper screwball comedy of Much Ado. It begins with four student friends making an ill-advised vow. For the next four years, they’ll devote themselves to study. Everything will be directed towards improving their minds and gaining wisdom. Excess and indulgence of all kinds are to be forbidden; the company of women, in particular, is to be prohibited. After all, how is a man supposed to focus on his studies with flibbertigibbets fluttering around him? (The co-ed system is clearly some way off.) The friends sign up to this ridiculous agreement – first, the King of Navarre (Sam Alexander) and then his loyal sidekicks Dumaine (Tunji Kasim) and Longaville (William Belchambers). The fourth member of their party, the level-headed and slightly maverick Berowne (Edward Bennett), chafes at the idea but eventually throws his lot in with his friends. There we are. Four years of chaste study are assured!

Only… no. The ink of the signatures is barely dry when the trouble starts. It turns out that the King of France’s daughter is on her way to the court of Navarre, to negotiate a treaty for the return of Aquitaine. The King of Navarre can’t refuse to meet her, which would be both ungentlemanly and politically unwise. Perhaps he and his friends could… bend the rules a little? Of course, no sooner has the King laid eyes on the beautiful Princess (Leah Whitaker) than he’s completely smitten; and, by happy coincidence, she is accompanied by three of her most charming ladies: Maria (Paige Carter), Katharine (Rebecca Collingwood) and the witty Rosaline (Lisa Dillon). The four young men haven’t got a chance. Fortunately each of them falls for a different lady – but each of them suffers the same agonising dilemma. How can he possibly admit to his three friends that he’s broken his vow? Soon, however, it becomes apparent that all four students have perjured themselves and they happily join together in a gleeful scheme to win their beloveds.

The RSC serve up a sparkling rom-com full of period charm, like a cross between Downton Abbey and Brideshead Revisited. Dumaine even has a teddy bear. I thought the setting was rather original but, having looked up earlier productions of Love’s Labour’s Lost, I see that I’m wrong: the 1910s and 1920s crop up rather a lot, along with cricket whites, punts and at least one other teddy bear. Perhaps the lure of golden-age Oxbridge is just too much for set designers to resist? In this particular case, however, the RSC don’t actually set the play at university, but at the King of Navarre’s grand country estate, based on the National Trust property at Charlecote Park in Oxfordshire. There’s dark wood panelling, marble pilasters, leather-bound books, chaises and rugs and dressing for dinner. There are outdoor entertainments, patio chairs and a fabulous Russian masquerade, complete with a balalaika and even a bit of hopak dancing. And the sets not only look gorgeous, but they’re very cleverly used as well. The main room is mounted on runners and slides smoothly back or forth as required, giving way to a sunny walled garden and, in one case, even the balustraded roof, where the foolish young men hide behind chimneys and cupolas to catch out their lovesick companions. It’s simply heavenly.

With only a few exceptions, the same cast perform both Love’s Labour and Much Ado. They are, predictably, excellent. Shakespeare is the raison d’être of this entire company and it shows in the fluid confidence with which the actors speak his verse. I’ve never seen or read the play before but could follow it without any trouble, especially because the cast were all so expressive in their performance. One of the comic highlights was John Hodgkinson as the flamboyant Spanish traveller Don Armado, hamming it up with relish thanks to a cod-Spanish accent, and sporting with the servant boy Moth (a sprightly Peter McGovern). And praise must also go to Nick Haverson’s bumpkin Costard: one of the few characters who breaks the fourth wall to engage the audience, and a real triumph of physical performance.

The weight of the play hangs, however, upon the leading couple. Not being familiar with the play, I’d foolishly assumed that the drama would focus on the King and Princess, but instead we find ourselves watching the courtship of Berowne and Rosaline. The actors, Bennett and Dillon, also play Benedick and Beatrice in Much Ado: a clever mirroring which emphasises the common themes of wooing and wordplay. And in Love’s Labour, Berowne is at the heart of it: his must be a tricky role to pull off well. Like Benedick, he channels both wisecracking wit and vulnerability. He is reasonable, romantic, filled with the cautious hope of one who finds himself unexpectedly falling in love and – unlike Benedick – he’s not afraid to give himself up to the passionate expression of his feelings. To make matters more demanding, Berowne has some magnificent monologues, especially that at the end of Act 4. High-minded oaths, he warns his friends, can be made at any time, but the chance for love may not come again:

Let us once lose our oaths to find ourselves,
Or else we lose ourselves to keep our oaths.

But the role was in good hands. Edward Bennett was absolutely captivating. I don’t think I’ve seen him before, although I’ve certainly heard of him: he was the understudy who stepped in at short notice to replace David Tennant on the opening night of Hamlet back in 2008, earning rave reviews for his performance. I can well imagine that he impressed as the thoughtful prince of Denmark. His Berowne was full of warmth and humour, playful and boyish, yet you occasionally glimpsed beyond the bonhomie, to see that these waters ran deep. He seemed to woo more earnestly than his companions – playing off Dillon’s whip-smart, sparky Rosaline – and to grieve more deeply at the end.

For Love’s Labour’s Lost, despite being a romantic comedy, has a strange ending. The delight turns sour with the arrival of a messenger bearing news of the Princess’s father’s death, and the company must part. It’s only now that the young women realise how serious their suitors were, and they’re abashed: they were playing, teasing, not really taking the protestations of love all that seriously. And the play ends with another solemn vow: the Princess and her ladies must return to France to mourn, but they ask the young men to devote themselves to contemplation and good works for a year. If they still wish to woo at the end of it, the ladies will welcome them back. Otherwise, no hard feelings. It’s curiously unresolved and it does, ironically, work very well as ‘Part 1’ of a longer story.

Besides, the RSC find a brilliant and poignant way to round off the play. We’ve been watching the playful games of one last dazzling summer, but shadows are gathering on the horizon. The young men leave the stage and, when they return to bid farewell to the ladies and the staff of the estate, they are all dressed in First World War army uniforms. Do what you may, the throat always tightens at such a sight. The rose petals flung liberally around the stage during the riotous Masque of the Nine Worthies suddenly look eerily like poppies. And, as the young men march away, there’s a sudden sting in the play’s final words: ‘You, that way. We, this way‘. And the lights go out.

This double-bill is a beacon of joy in the dark, dull days of winter and, even better, it’s on until March, so there’s plenty of time to see it. You can see the two plays on consecutive days or, if you’d like to binge-watch some Shakespeare, both parts can sometimes be seen on a single day. If you simply can’t get to London, there’s good news: the two productions are available on DVD, albeit with a slightly different cast (though Edward Bennett is there as Berowne and Benedick).

Find out more or buy the DVD