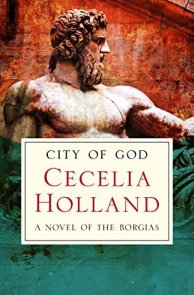 A Novel of the Borgias

I’m on a bit of a Borgia kick at the moment. Having just finished Sarah Dunant’s new book In the Name of the Family (the post will go live on the 18th, nearer its publication date), I moved on to Cecelia Holland’s vision of 16th-century Rome. The Borgias are at the apex of their power, with Alexander VI on the Papal throne, his daughter Lucrezia being offered in marriage to the d’Este in Ferrara, and his son Cesare driving the fear of God into the Romagna at the point of a sword. As Italy shifts under the weight of their dominance, a sharp-eyed envoy at the Florentine embassy begins to wonder whether he can use the Borgias as a stepping stone to his own fortune. As a roistering story of the Roman underbelly, full of dark alleyways, abductions and subterfuge, this should have been an absolute stunner… and yet it’s oddly stilted and unsatisfying.

Nicholas Dawson is the secretary to Ercole Bruni, the Florentine ambassador to the Curia. He is that most valuable of things: an intelligent servant to a weak master. Bruni has no grasp of foreign affairs, explaining all events by the conjunction of the planets, but Nicholas knows better: the study of mankind is man, and he thrives among the power webs of the Holy City. It is Nicholas who teases out the political truths which are sent back to Florence, who rewrites Bruni’s stilted letters and adds the protective cipher to their reports. Most people believe the gaudy ambassador to be the seat of power, but those who know better value Nicholas’s opinion. His friendly connections with the Borgia family help him to improve his prospects yet further, when a chance encounter with Cesare Borgia, il Valentino, develops into an offer of work. Nicholas savours intrigue more than anything, but his desire to be at the heart of the web may come back to bite him: after all, having delved so deeply into the secrets of the Borgias, how can a man expect to escape?

There are times when it can be a curse to know too much about a period, because you keep getting distracted by historical errors or improbabilities. Most people probably wouldn’t give two hoots that Isabella d’Este, Marchioness of Mantua, is mistakenly called Beatrice (her own sister, formerly married to the Duke of Milan, who’d died in 1497). But this does matter to me. If we’re to lose ourselves in a historical novel, we have to believe it and we have to trust in the author’s command of her period. There are also smaller things that niggle. Nicholas and his colleague Bruni wear ‘coats’, which they often remove and which I found it difficult to visualise: were these doublets, robes or mantles? Nicholas himself cherishes the small pretension of an elegant walking cane, while Bruni has a habit of curling up in his office with ‘novels’ rather than official reports. Poetry, dialogues or Latin classics, I would have accepted, but as far as I’m aware there was no such thing as a printed novel available in 1502, unless you stretch the term to cover the Hypnerotomachia Poliphili. End of pedantry, I promise. These are minor things, but they broke the spell: in my mind, these were 18th-century gentlemen who’d unaccountably strayed into the 16th century. There was, incidentally, no author’s note.

Then there’s the question of Nicholas himself. We are simply told that he’s the secretary to the Florentine ambassador. Later we find out that his parents were English but moved to Navarre, where he was born (it surprised me rather to think of Navarre as Spanish, as at this period I always associate it with Henry IV of France). But why he should be English is never explained: it gives him no advantage or disadvantage, and the story would have been no different if he’d been a Spaniard born and bred. But in any case, why should a Spaniard have become a member of the Florentine diplomatic team? That is never explained and it’s something that I’d have thought was rather important. I’d have thought that someone in such an influential position would have needed a fair amount of Florentine blood, or at least a strong connection to the city, but we know nothing of Nicholas’s past. Maybe he has already featured in another of Holland’s novels? – but there’s nothing to indicate that here. It is passably interesting that he prefers boys to girls, but again, there’s no real significance to it, nor any real sense of emotion in his relationship with Stefano.

I’m afraid I also failed entirely to buy Holland’s suggestion that all of Cesare Borgia’s daring feats in the Romagna – from the taking of Urbino to the threatening of Florence – were actually Nicholas Dawson’s ideas. I can accept that Nicholas is two-faced and more interested in his own future than the good of the city he represents; but how does this man with no military experience come up with tactics that have eluded Cesare himself? And why would Cesare entertain such ideas from a man he barely knows? In fact, I’m not sure how Nicholas has got to his position of influence with the Borgias – how has he become such close friends with Angela Borgia? Was it really possible for men of his relatively lowly status to wander in and out of the Vatican; and would a man as purportedly intelligent as Nicholas risk all that advantage, as he eventually does?

This is the first book I’ve read by Holland – I have several others waiting to be read, among them Hammer for Princes and Until the Sun Falls – and I have to admit I expected more. The quality of her descriptive prose promises much, but the sentence structure is very staccato and the characterisation thin. We’re told, rather than shown: Nicholas goes here. Nicholas goes there. Nicholas sees this person. Nicholas returns home for dinner. Nicholas spends another evening watching Stefano play tarocchi. And what comes of it? Perhaps this is deliberate – perhaps it’s some kind of postmodern subversion of the expectations that we have about historical fiction, showing that it isn’t all chases by moonlight and swinging on chandeliers, and that people spend a lot of their time walking around the streets and watching other characters at parties… but it just feels a bit flat. I never quite understood why I should care about Nicholas or any other of the characters – the only one for whom I felt genuine affection was poor, devoted Juan. And, trust me, it takes a lot to make me remain indifferent to Cesare Borgia, but here he lacked the force with which every contemporary record imbues him: he becomes a beautiful youth, good for leading an army and blessed with an unnerving henchmen in Michelotto (here called Miguelito) but influenced strategically by Nicholas. It just didn’t ring true.

I’m sorry to admit it, but it was a slight disappointment. Having read reviews elsewhere, I see that this isn’t considered one of Holland’s strongest books, so I still have hopes for her others. And perhaps it wasn’t fair to read it so soon after another novel on the same subject, which can only have accentuated my alertness to its problems. But the fact remains that this is a curiously meandering book, giving us little insight into the historical figures and giving us a protagonist who never quite seems to know what he wants.

Those who’ve read other Holland, please reassure me… it gets better, right? She’s written about so many subjects I want to read about…

I received this book from the publisher via Netgalley, in exchange for a fair and honest review.