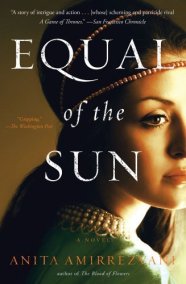 In 1576, when Tahmasb Shah of the Safavid dynasty dies unexpectedly, there is no designated heir to the Iranian throne. Sensing the chance to consolidate their power, factions within the ruling class weigh up the contenders. Pari Khan Khanoom has all the qualities of a brilliant Shah – intelligence, political acuity, generosity and compassion – but one major flaw negates all the rest: she is a woman. And yet she is determined to play a role in the struggle for the succession. As Tahmasb’s beloved daughter and most trusted adviser, she has helped to direct the empire’s policy for fourteen years and resolves to carve out a place for herself under the new Shah. But which of her brothers will succeed in claiming the crown? Based on the true story of Tahmasb’s ambitious, fratricidal sons, Amirrezvani’s novel turns the spotlight on their remarkable sister, as remembered by her loyal vizier, the eunuch Javaher.

I’ve read so much about 16th century Europe, but both fiction and histories seem to run out of steam at the boundaries of the Ottoman Empire. Western-centred writing rarely penetrates further to the south, where Iran still held sway over a vast territory, from Africa to India. Thus, Amirrezvani’s tale is an intriguing insight into a world of which I knew very little, and it’s especially illuminating on what life was like for women in this courtly but devoutly Muslim period. Pari may be a master strategist, a talented poet and the head of a valuable intelligence network, but she’s still a woman and so must weave her web within the limits of cultural restrictions. She can only meet men to whom she isn’t related if she conceals herself behind a curtain; she cannot easily travel beyond the confines of the palace harem; and she has little direct experience of the outside world.

This is where Javaher comes in. As a eunuch, he exists in a grey area between male and female, and so can pass through the walls between harem and outside world. He’s an interesting narrator because, just as Pari transcends what is expected of a royal woman, so Javaher transcends the stereotype of a eunuch. Having seen his father executed as a traitor at the age of seventeen, Javaher is driven by the need to find the killer and also to prove his family’s loyalty to the crown. And so, at seventeen years old, he has himself castrated, as a means to serve within the court and find out the truth of his father’s death. His sacrifice is great – his talents are greater still – and Javaher’s star has risen swiftly, until it deposits him in the service of the dynamic, enigmatic Pari. I should note that Amirrezvani is very interesting on the physical issues faced by eunuchs in Iran. Unlike eunuchs in the west (the castrati, for example), those in Iran had their male genitalia completely removed rather than losing just their testes. The irony is, of course, that Javaher and Pari are both far fiercer and more stalwart than they are ‘supposed’ to be within their gender roles.

It’s all very interesting, but although the plot offers political intrigue, murder, harem plots and squabbling over the throne, the book never really takes off. In some ways the language is very flowery, especially in the courtly phrases used within the harem; but the prose itself is oddly flat and staccato. Moreover, I felt there was a crucial weakness in Pari’s characterisation. The brilliant woman described to me by other characters wasn’t the Pari I saw. We’re told that this dazzling princess is admired by all for her deft governance. Why, then, did her actions sometimes seem rather clumsy, especially in her overt efforts to gain more power? Why wasn’t this allegedly brilliant woman displaying a little more tact and subtlety? It was frustrating, because if Pari had been all that she was meant to be, I know that I’d have been utterly bowled over by her and that wasn’t the case.

However, I’m still glad I read the book. After all the reading I’ve done on Achaemenid Persia, it was intriguing to see similar themes and stories playing out in Iranian court life some two thousand years later. Amirrezvani has introduced me to a new and fascinating world, and I’m keen to read her first novel, The Blood of Flowers. Has anyone else read either that or Equal of the Sun? Do let me know what you think of Amirrezvani’s style, and I’d love to know if anyone has come across any other novels set in early modern Iran.

Oh, and isn’t the cover gorgeous?