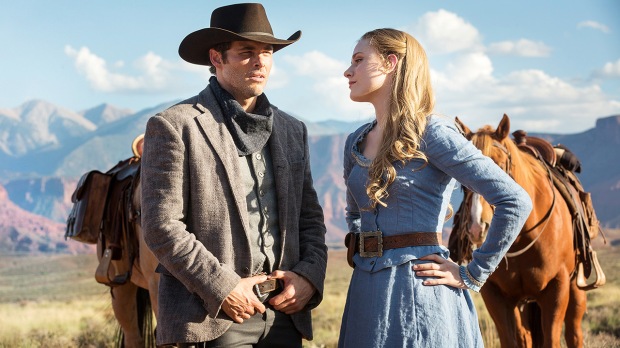 Sometimes you just have to binge-watch a series and I’ve been completely captivated by Westworld, which I discovered on Amazon a couple of weeks ago. For those who haven’t yet come across this phenomenon, it’s a TV series developed from a 1973 film written by Michael Crichton, who seems to have a bit of a thing about immersive theme parks that go wrong (remember his modest little film about dinosaurs?). Westworld presents us with a vast, sprawling park in which visitors can play out their Wild West fantasies of murder, adventure and sexual domination, interacting with an astonishingly advanced group of ‘hosts’, or robots programmed with particular characters and storylines. It’s epic, ambitious and astonishingly well-made, with a fantastic cast. A real must-see. 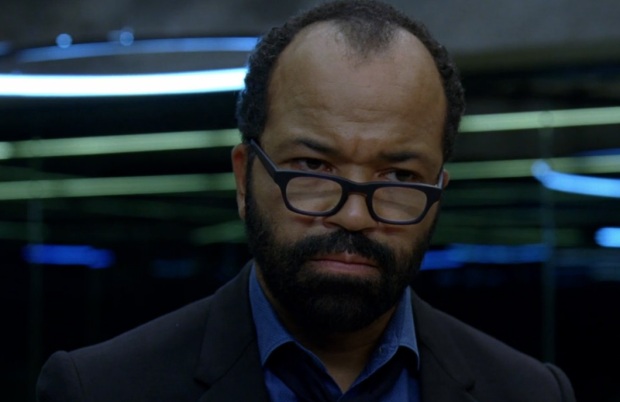 In Westworld, anything goes. Visitors come in on the steam train from outside and throw the small community of Sweetwater into chaos. And every time it’s the same: the brothel full of willing girls, run by the shrewd Maeve (Thandie Newton); the sheriff drums up volunteers to ride into the hills to track down the bandit Hector Escalon (Rodrigo Santoro); the pretty farm-girl Dolores (Rachel Evan Wood) drops her shopping and waits for a man to help her pick it up. Each and every character you interact with in Westworld can lead you along a different narrative path, tailored by you and entirely safe. For, in Westworld, you can do (in Maeve’s words) ‘whatever the hell you like’ with no consequences. Visitors are safe. The hosts can’t hurt them. But the hosts themselves can, of course, be hurt. And that’s OK. When a host is killed, he or she is taken back to base, repaired, and sent back out onto the floor ready to start the whole cycle again. Simple. 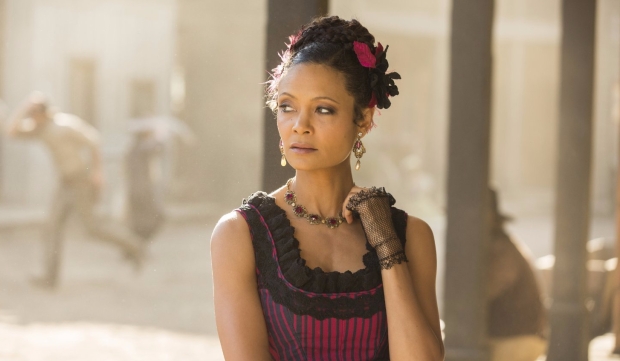 At the edge of the park, the glossy control centre keeps an eye on the resort. Sharp-eyed, short-tempered manager Theresa (Sidse Babett Knudsen) frets about cost and security, while security chief Ashley (Luke Hemsworth) stands by to bring in any malfunctioning hosts. But the heart of the enterprise lies lower down in the building, in the warren of labs where the hosts are built, conditioned and programmed. Here, power lies with the park’s creative director Robert Ford (Anthony Hopkins), a man whose ambitions in opening this new world threaten to be perverted by the simplistic shoot-or-swive approach of his new colleagues. Ford believes in stories. Epic narratives. Tales that don’t just give the visitors the pleasures of the flesh, but that delve deeper and help them come to know themselves. 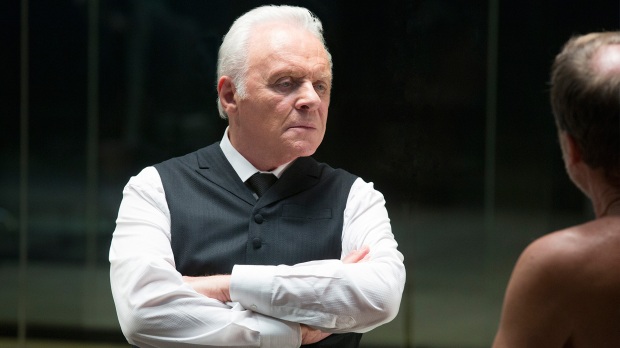 At Ford’s right hand is the head of Behaviour, Bernard (Jeffrey Wright), who is seldom seen without an expression of long-suffering perplexity. There’s good reason for this. Bernard is responsible for coding the hosts and the buck stops with him if something goes wrong. And unfortunately something does seem to be a little bit odd. Since a recent update, designed to add attractively human behaviour called ‘reveries’, some of the hosts seem to be departing from their scripted narratives and losing themselves in recurring activity. It seems that, somehow, hosts are accessing records of activity in previous ‘lives’ that should have been wiped during their repair process. Could it be that these machines are developing memories? And there’s a deeper concern. The hosts with obvious issues can be pulled out, cleaned, reset if possible and destroyed if not. But what if there are hosts out there in the park who have been able to understand what’s happening to them? What if their memories are spurring them on to develop a sense of self? 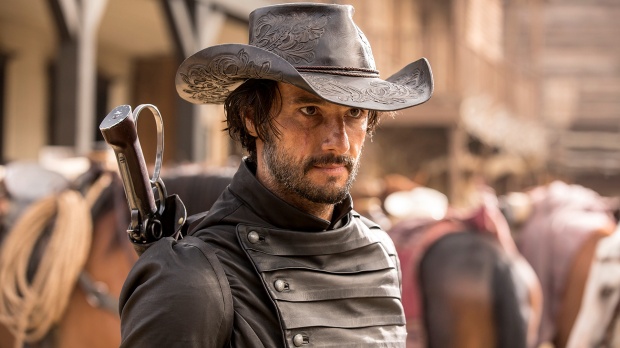 Into this stick-em-up, shoot-em-down maelstrom come a group of visitors, bent on rapine and slaughter. Two wealthy young men arrive on a ‘bonding’ trip: gentle William (Jimmi Simpson) is due to marry the sister of Logan (Ben Barnes), and since the family owns a large stake in Westworld, Logan thinks his future brother-in-law should see what all the fuss is about. For Logan, the place is a simple way to satisfy appetites that aren’t socially acceptable beyond the park’s borders – blood, sex, and more blood. But his casual disregard of the hosts troubles William, who is affected by Westworld far more than he expects. And then he meets Dolores… At another point in the park, the enigmatic Man in Black (Ed Harris) is cutting a swathe of death and destruction. As a longtime visitor, he’s fed up with the ordinary games and has decided to create one of his own. 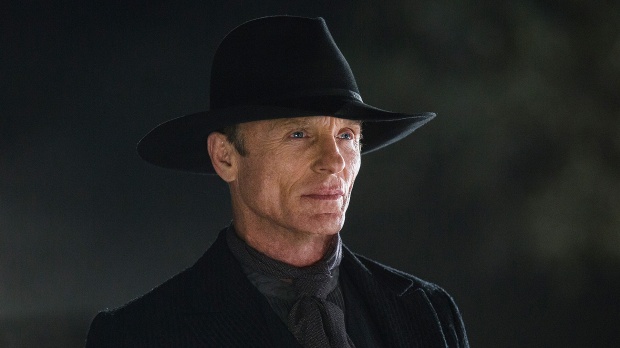 The Man in Black (Ed Harris)

This is far more intelligent than your average gunslinger film, dwelling on questions of when consciousness becomes sentience and when sentience becomes genuine life. Yes, it borrows much from Frankenstein, I suppose, but there’s also a telling allusion in the final episodes to Michelangelo’s Creation of Adam. Its sci-fi vision of a near future, where we can build robots that are virtually indistinguishable from humans, is both tantalising and terrifying. We see how the hosts are built and trained; we get a vivid picture of life on both sides of the ‘reality’ divide. We see not only the elemental struggles of the hosts within the park but the corporate scheming behind the scenes. And, as we get to know the characters, we understand that deeper power struggles and narratives are playing out. ‘Violent delights’ do indeed ‘have violent ends’. Humans have become gods and are creating beings in their own image… but what responsibilities do gods have towards their creations? And what happens if and when the creations become aware of their creators?

This is brilliant stuff. Slightly overcomplicated in places, but it does all make more sense in the end. Sophisticated, gripping and so much cleverer than it seems at first. The real challenge will be how to keep up this standard in the inevitable second season, as Season 1 works so well as a complete story in itself. There will surely be a DVD but it doesn’t seem to be out yet. However you can stream it on Amazon. 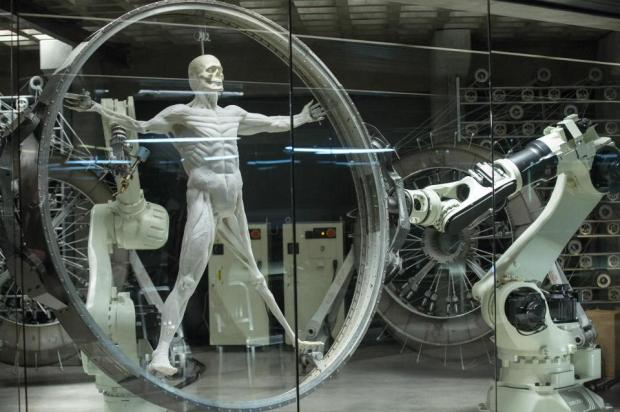