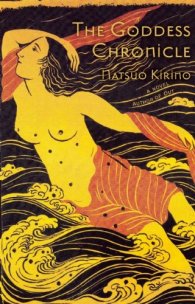 Back when the Canongate Myths series was introduced in 2005, I bought the first three in a boxed set and swore I’d read all of them as they were published. Needless to say, that didn’t happen. And so, when I realised that Natsuo Kirino (whose Grotesque I admired) had contributed a story to the series, it was a welcome chance to catch up. Retelling the Japanese myth of Izanami and Izanaki, this is an eerie tale of joy and sorrow, light and darkness, love and vengeance.

Two little girls grow up on a poor but proud island of fishermen. Namima has always loved her older sister Kamikuu and is bewildered when, on Kamikuu’s sixth birthday, they are separated. Kamikuu is taken away by their grandmother Mikura-sama and trained to succeed her as Oracle when the time comes. Namima, by contrast, is now forbidden to spend time with the sister she adores, for fear of contaminating Kamikuu with the impurity that Namima is told flows within her blood. Only as she grows older does the little girl understand that her fate is still entwined with that of her sister. For, when Mikura-sama dies and Kamikuu succeeds, it transpires that each Oracle must have a sister who can take on the opposed sacred duties. That is to be Namima’s fate: to serve the darkness as Kamikuu serves the light; to tend to the dead while Kamikuu succours the living; and to die in the same moment as her sister, mirroring her even to the grave. Her protests are ignored. Lonely and terrified, she is abandoned in the precinct of the dead with her whole unlived life stretching out in front of her. Help comes from an unexpected quarter – only to turn, swiftly and bitterly, into betrayal.

Beneath the waves, in the kingdom of the dead, the dark goddess Izanami nurses her own bitterness. Years before, she and her god-husband Izanaki gave birth to the world and its deities, but even Izanami’s divinity couldn’t protect her from the effects of bringing forth the fire god. Burned to death, she now lingers in the shadows under the sea, brooding on her fate. Her path to the upper world is blocked by a boulder which keeps out all but the tiniest of creatures, flies and ants and wasps, which come to bring her news of Izanaki in the world above. Unencumbered and free, he has taken on the duty of procreation himself and roams the world, ravishing women and peopling the lands, while his estranged wife fumes in the shadows and takes her revenge by sprinkling black water across the world, each drop bearing death in its wake. This is the tale of two women – Izanami and Namima – betrayed by men, tricked out of their rightful status, and seeking revenge. Dark and elemental, it’s the perfect kind of tale for Kirino’s pen.

There are also fascinating links with western myths. The bitter goddess who strikes at her philandering husband’s amours could be Hera or Juno; and Izanami, like Persephone, is doomed to remain in the realm of the dead when she consumes food there. The path down into the darkness, blocked by that boulder, but formerly trodden by gods and heroes, is a motif that echoes throughout classical mythology, from the Odyssey to Book VI of the Aeneid. The mother burned to death by the birth of a fiery child isn’t a million miles away from the fate of Semele. Now, of course, I don’t know the original Izanami story: perhaps these are familiar precisely because Kirino has drawn on western myths. Or perhaps it’s yet more proof that there is some kind of ancient common mythology for all of us. I also found it interesting to think of Izanami being relegated, and Izanaki taking on full control, in light of the way that western religions gradually turned away from female-centred goddess-worship towards the male-dominated pantheons of Greece and Rome. Is a similar thing happening here in Japanese mythology? Lots to think about. And, yet again, I’m conscious of The Golden Bough sitting on the shelf over there, rebuking me for never having read it.

Having said all of this, The Goddess Chronicle isn’t Grotesque. At root it has a similar feminist anger bubbling inside it, at the injustice of women having their futures forcibly defined by men, but it’s a myth. By its very nature there are broad expanses of significance rather than close examination of character. The plot has holes and at times meanders. The end, if I can say this without risking spoilers, is strangely unsatisfactory. And yet it does conjure up the ritualistic life of an ancient tribal community in eastern Asia, and its ambition has the rhythm of an ancient Greek tragedy, even if it never quite comes off…

It is still recommended. For those of us who aren’t students of Japanese mythology, this is an tantalising introduction to an unfamiliar creation myth. If anyone out there does know the original story, I’d love to know how Kirino’s rendition differs from tradition. And of course, I’m keen to know which of the other books in the Canongate Myths series are worth seeking out. I’ve read The Penelopiad and Weight, and I’m keen to read The Fire Gospel, Binu, Where Three Roads Meet and Girl Meets Boys. Any others I shouldn’t miss?